Kitty Hawk receives beach wheelchair for use by locals and visitors 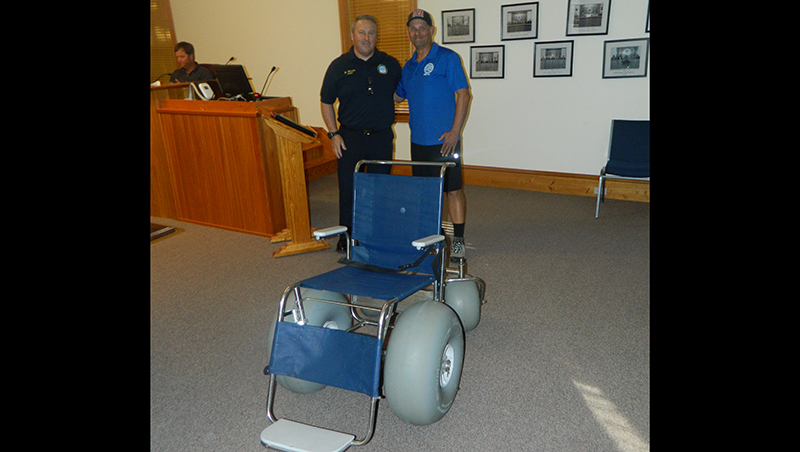 Meeting one day later than normal due to the July Fourth holiday, the Tuesday, July 5, the Kitty Hawk Town Council regular session opened with a special presentation.

After a brief introduction by Mayor Craig Garriss, Kitty Hawk Fire Chief Mike Talley announced that Ocean Atlantic Rentals general manager Chris Marik had donated a beach wheelchair to the department to assist with locals and vacationers needing help getting to the beach.

“This is a great in-house program,” said Talley. “Our beach wheelchair program allows residents and visitors to our town with medical issues or physical limitations to borrow a wheelchair for a week at a time so they can visit the beach.”

The DeBug beach wheelchair’s design enables it to move with ease over sand, gravel, grass and other uneven terrain so that mobility impaired individuals can visit the beach. The chair donated last Tuesday joins two others presented to Kitty Hawk last year. All are available on a first come first serve basis to be used free of charge.

“This is great,” added Garriss. “Ocean Atlantic really came through. Not only for our citizens, but also for our many visitors. And that’s a great addition. Thank you.”

The first action item for the evening was approval of the consent agenda with June 6 council meeting minutes.

Council then held two separate public hearings. The first hearing led to the approval of a request to allow a tattoo studio in the BC-1 (Beach Commercial) district and after the second hearing council granted a special use permit for a tattoo studio at 3608 North Croatan Highway.

Kitty Hawk already allows tattoo studios as a special use in the BC-2, VC-2 and VC-3 zoning districts. In 2021, when Planning Board members reviewed the initial text amendment request for allowing tattoo studios, the BC-1 district was included as a part of the request but was not included in the recommendation from the Planning Board, nor was it included in the approval from council.

One reason cited for removing the BC-1 district was its vicinity to residential zones, even though all commercial districts in town abut a residential district in some fashion.

Other business for the evening included setting an August 1 public hearing for a special use permit request to have a medical office at 5121 North Croatan Highway, an agreement to have a more detailed discussion on itinerant merchant regulations at a later date, authorization to convert a military vehicle into a high water rescue truck with budget surplus funds and support for action by Nags Head Mayor Ben Cahoon to explore sanctions for anyone creating a safety hazard by digging large holes in the sand on the beach.

During department reports, town manager Andy Stewart, announced that after a recent review by the North Carolina Insurance Services Office, the Kitty Hawk Fire Department has improved its ISO class rating from a 4 down to a 2. ISO ratings have a direct impact on insurance premiums for homeowners and businesses.

At the end of business, council adjourned until the 6 p.m. August 1 meeting.