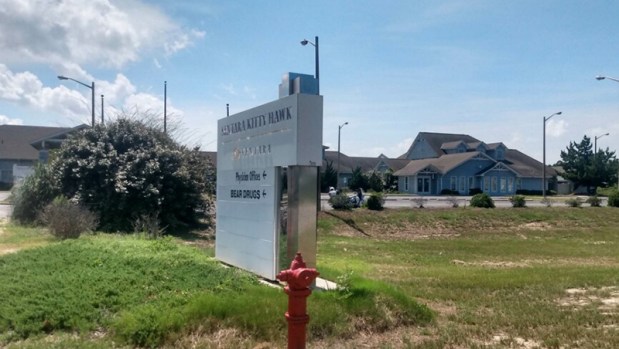 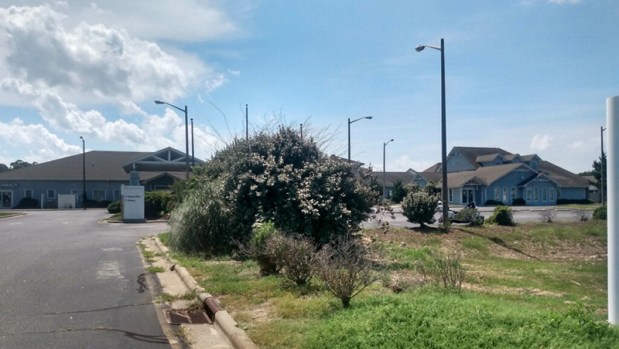 The six-acre tract of land with a 32,000-square-foot building sits near the US158/NC12 intersection and is owned by Pasquotank County. Except for an area leased by Bear Drugs, the building has been closed since Sentara vacated the site in 2017.

According to Pasquotank’s county attorney Mike Cox, there has been interest from other potential buyers, but the Kitty Hawk offer is the one getting the attention right now.

“Kitty Hawk is the highest [bid] right now with a $4 million offer,” said Cox. “We have had some [offers] that have kind of come and gone, and some were lower bids, but Kitty Hawk is really the top one right now.”

In June Kitty Hawk made a $2.7 million offer for the property but Pasquotank Board of Commissioners rejected it in favor of a conditional $4.5 million offer from DPJ Residential Acquisitions in Charlotte. DPJ wanted to develop a multi-story apartment complex with more than 200 units.

According to Kitty Hawk planning director Rob Testerman, the property is located in the Emergency and Governmental Services District which allows for hospitals, medical centers, town-owned or leased facilities and state-owned facilities. Any other use would require rezoning the property.

“There have been some calls about the property but no official requests,” said Testerman. “But from what I hear about plans for the property there may also be a need for text amendment changes to accommodate height and density changes.”

A lower DPJ offer gives Kitty Hawk the lead on an inside lane with its $4 million offer.

If the sale is approved, Kitty Hawk would like to renovate the building to accommodate a new police headquarters, fire department substation and Dare County EMS station.

Town officials had already initiated plans to relocate the police department from the old post office building on West Kitty Hawk Road, a site prone to soundside flooding and heavy rain events, to town-owned lots at U.S. 158 and Bennett Street. When the initial construction cost estimate came in, the more than $6 million projection was way over budget.

Kitty Hawk town manager Andy Stewart has said although some work would be needed, purchase of the Pasquotank property could result in a savings to taxpayers.

Stewart said the building might have some mold – the reason Sentara cited for leaving it – but there are different health care standards for medical facilities than general government agencies.

“We would look at cleaning all that up,” said Stewart.

Cox also said North Carolina law allows a government-to-government transaction without following an upset bid process. There are no advertising, notice or other procedural requirements. He added that while Kitty Hawk may not be required to submit a deposit, the town has offered to do so.