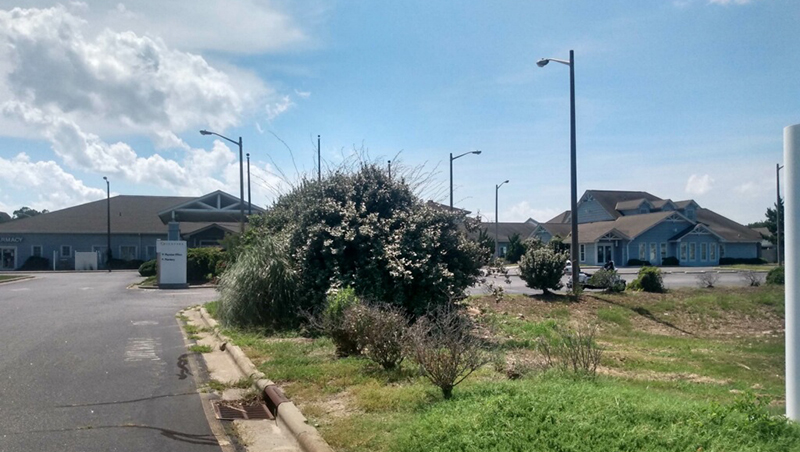 Pasquotank County attorney Mike Cox confirmed Tuesday morning that the Pasquotank Board of Commissioners voted 4-2 Monday night to accept a $4.1 million bid from Town of Kitty Hawk officials to buy a 6-acre parcel at 5200 Croatan Highway in Kitty Hawk.

Pasquotank has owned the Dare County property since 2000. It was leased to Sentara Healthcare, a Norfolk, Virginia-based healthcare system, and operated as one of the area’s first urgent care facilities with other medical offices at the site until Sentara abandoned the building in 2017. Except for an area of building leased by Bear Drugs, the 32,000-square-foot structure has been closed and empty since Sentara left.

While the majority of Pasquotank commissioners favored the sale to Kitty Hawk, two voted against the sale Monday, saying they thought the county should get an appraisal with hopes of a higher value and, with it, more money. Cox said county manager Sparty Hammett took the position that it could lead to a higher value, but accepting the Kitty Hawk offer would be a much quicker transaction.

North Carolina General Statute 160A-274 allows government-to-government transactions without following a potentially lengthy upset bid process. There are also no advertising, notice or other procedural requirements.

It was also noted that while an appraisal could come back with a higher value, it could also be lower.

The bid amount Pasquotank accepted at the August 1 meeting was the third proposal from Kitty Hawk. In June, Kitty Hawk made a $2.7 million offer for the property but Pasquotank rejected it in favor of a conditional $4.5 million offer from DPJ Residential Acquisitions in Charlotte. DPJ wanted to develop a multi-story apartment complex with more than 200 units. DPJ later dropped its bid to $3.5 million when it was learned the site would need significant wastewater work to develop apartments there.

According to Kitty Hawk planning director Rob Testerman, the property is located in the Emergency and Governmental Services District which allows for hospitals, medical centers, town-owned or leased facilities and state-owned facilities. Any other use would require rezoning the property, about a three month process.

When DPJ lowered its offer, Kitty Hawk came back with a $4 million offer making it the top bidder. Within days, another $100,000 was added to the bid, which, according to Mayor Craig Garriss, was to ensure that Kitty Hawk got the building.

“There were some other players in the process,” explained Garriss. “And it was as much to ensure that we got it as to let Pasquotank know that we were serious. We want it for our police station and it will be great for Kitty Hawk.”

While Pasquotank waits on the paperwork needed to support the transaction, Kitty Hawk officials have already set in action their next steps.

Garriss said inspectors have already been scheduled to review the building in an effort to determine what it needs.

While plans at this point are fluid, Garriss said he expected there would be some construction work such as knocking out walls, adding new walls, new carpet, lighting work, some painting and lots of cleaning would be on the list to begin with. The outside would also need some cleaning, cutting back some of the vegetation and trees along with some parking lot work. At some point in the future, the north end of the building would likely be demolished and a new roof needed.

The aim, Garriss continued, is to turn the existing building into a police department.

Town officials had already initiated plans to relocate the police department which is currently in the old post office building on West Kitty Hawk Road and prone to soundside flooding and heavy rain events to some town-owned lots at U.S. 158 near Bennett Street.

About the time initial construction cost estimates came in way over budget, the vacant Sentara Health property came on the market. Knowing it would need some work, Kitty Hawk officials realized purchase of the Pasquotank property could result in a savings to taxpayers.

“The savings to our taxpayers will be in the millions,” said Garriss. “In addition, it will put a large vacant building and vacant land to use. They are not making any more land, so this gives us a chance to grow and expand.”

Garriss went on to say while initial plans are to renovate and make room for the police department, at some future point a bay could be added for the fire department to house apparatus.

“We also welcome and hope Dare County will follow through with interest in having an EMS station,” he added.

Garriss said also that there would be talks with Bear Drugs to determine what the future holds for a relationship with Kitty Hawk and that Pasquotank officials were very helpful in making the transaction happen and he appreciated their help.