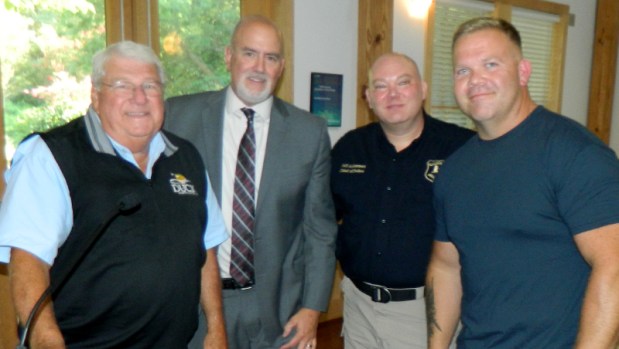 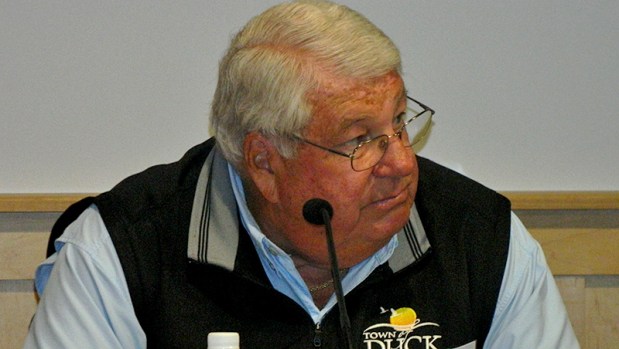 Duck Mayor Don Kingston made a recommendation during the August 3 Town Council meeting that was approved for each town employee receive a one-time $3,000 bonus. Philip S. Ruckle Jr. photo

It was during the closing minutes of the August 3 meeting that Mayor Don Kingston made the monetary recommendation, adding that the biggest driver behind his request is an economy with escalating costs.

“Some of our employees, particularly those who are newer to our staff and not high wage earners, are struggling to make ends meet,” said Kingston.

He went on to say that when the current merit and pay structure was approved for the current fiscal year, there was a different economic environment in place. Although town manager Drew Havens proposed a COLA increase during the most recent budget process, council opted to maintain a merit/bonus system.

That choice did not anticipate nor account for current economic pressures.

In addition, some neighboring municipalities have made significant compensation changes to account for those economic changes, making them a potential draw for employees.

“I think,” said Kingston, “that we are now behind the eight-ball.”

Kingston said he and Havens favor a set bonus amount since a percentage bonus, while helpful, provides a larger benefit to higher wage earners.

“A fixed bonus amount,” Kingston explained, “will do more of what we want to accomplish. That is to provide more help for lower wage earners.”

It was noted also that if a merit/bonus salary increase were approved, it would not occur until an employees’ anniversary date. Because less than half of town staff have an anniversary in the first quarter, most would not see a pay increase until later in the fiscal year.

A fixed $3,000 amount per employee earners equates to a 6.4 percent bonus for the lowest wage, one that could help make ends meet in an economy with inflation running at around 9 to 10 percent.

Providing a loaded (to include employer FICA, retirement, 401k contributions) $3,000 bonus, the cost for 10 Town Hall staff, 14 police and 15 fire employees is in the neighborhood of $146,369 with money coming from the fund balance. Havens confirmed that there is still some money from the federal Affordable Care Act available in the fund balance.

“I’m in favor of this,” offered Monica Thibodeau. “I feel like our employees are something that we greatly value, and we want to show how much we value them.”

As the discussion continued, Rob Mooney and other council members agreed that something should be done and that a bonus should be sooner rather than later.

Kingston’s motion to approve was for $3,000 net after taxes and will take effect in the next pay period. The one-time bonus for staff – excluding the town manager who undergoes a separate salary review process – will go to anyone working full-time for the last six consecutive months in addition to anyone using accrued sick, vacation or compensatory leave.

Following the 5-0 vote to approve, Havens thanked council for its action.

“Our lower wage earners are just as important as those making higher wages,” Havens added. “They are under a lot of pressure and this will go a long way toward helping them.”

Among the regular business items for the evening was a special presentation for Master Police Officer John Gilreath, who was recognized for completing five years of service. In recognition, Gilreath – who has about 17 years police experience overall – was presented with a certificate and a local business gift certificate.

Following a brief public hearing, council approved on its first reading a request to add residential duplex structures as a permitted use in the C-1 Neighborhood Commercial Conventional Zoning District.

During a review of details for the change, it was noted that in 2004, council made code changes to have the commercial districts be developed for commercial purposes only and removed residential uses. The vote for the narrowly-drafted change puts residential use back on the authorized list for all properties zoned C-1 in Duck Village that meet the dimensional requirements of the R-2 zoning district for residential uses and also adds a definition of “duplex” to the zoning ordinance to be any dwelling place designed for, or occupied by, two families.

Residential uses in accessory apartments as second floor occupancy of commercial structures are already permitted in the C-1 district.

One hearing to review proposed changes for stormwater management requirements that would provide clear and consistent standards for engineers and staff to maintain the intent of the lot coverage allowance when an engineered stormwater plan is proposed, and a hearing to eliminate some code inconsistencies and clarify the elevation of dune walkover structures and under what circumstances minimum setback exemptions can be granted.

Council also authorized the Planning Board to review Town Code section 156.124 and Chapter 94 for possible action.

Other council actions for the evening included approval of July 6 council meeting minutes, a FY 2022 audit contract and authorization for the town manager to execute a contract with Emerald Forest for Dune/Beach Planting.