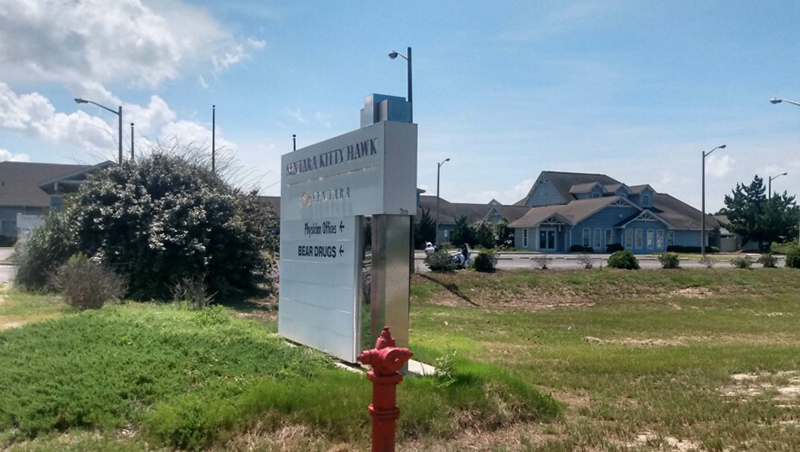 The Kitty Hawk Town Council held a special called meeting Wednesday, August 10 to review its due diligence progress for the purchase of the former Sentara Healthcare facility and surrounding six-acre parcel at 5200 Croatan Highway in Kitty Hawk.

The property, owned by Pasquotank County since 2000, had been leased to Sentara Healthcare system. Sentara abandoned the building in 2017 and, except for an area of the building leased by Bear Drugs, the 32,000-square-foot structure has been closed and empty since.

Earlier this month, Pasquotank County attorney Mike Cox confirmed that a $4.1 million bid from Kitty Hawk officials to buy the property has been accepted.

Kitty Hawk officials want to relocate the police department, which is currently in the old post office building on West Kitty Hawk Road and in an area prone to soundside flooding, to the former Sentara site. With construction cost estimates for a new police station on town-owned lots along US 158 near Bennett Street way over budget, such a move could save the town considerable money.

“The savings to our taxpayers will be in the millions,” said Mayor Craig Garriss. “In addition, it will put a large vacant building and vacant land to use.”

Kitty Hawk now has, according to town attorney Casey C. Varnell, a 60 day due diligence period to inspect the property and its condition to determine if it wants to follow through with the sale agreement.

During Wednesday’s meeting, town manager Andy Stewart reviewed the due diligence process, saying several steps have already been completed with others scheduled for the following week.

“Staff has been busy and want to make sure this is the right thing for the town,” said Stewart.

When asked if the property was right for the police department, Kitty Hawk Police Chief Joel Johnson confirmed that a middle section of the structure could be converted for use as a police department.

Johnson explained that after walking through the building, he was not sure of the square footage but felt there would be enough area for a lobby, records room, evidence room and sally port as well as a training area.

“This is the best option for the town and taxpayers,” said Johnson. 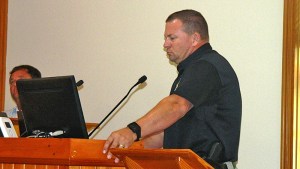 During discussion on renovation plans, it was agreed that while part of the building could and should remain in place, some modifications would be needed and other areas on the north side would need to come down due to its poor physical condition, the cost of repairs and the need for access to other parts of the building.

When Garriss pressed council members for a position on moving forward, the consensus was to keep rolling ahead.

Garriss said also that Bear Drugs is currently a tenant and there has been interest from other medical providers to rent part of the building outside of the police department area.

While most council comments were in favor of allowing Bear Drugs and others to rent space, Varnell reminded council that it could not enter into any such deals until it had title to the property.

“We need to wait until the dust settles,” suggested councilwoman Charlotte Walker.

When Garriss said there was also interest from Dare County to build an EMS station on two of the four US 158 lots, councilman Jeff Pruitt advised that it would not be wise to answer until council knew for sure it had the Sentara property.

“If we get this property we won’t have any use for those four lots,” said Pruitt. “But we owe it to Kitty Hawk taxpayers to not just give it away.”

As the meeting came to a close, Stewart advised that there are no financial commitments in place other than for inspections to the property and Garriss added that the biggest projects and expenses will come after the due diligence process. The 60-day due diligence period can be extended for an additional 30 days if needed.