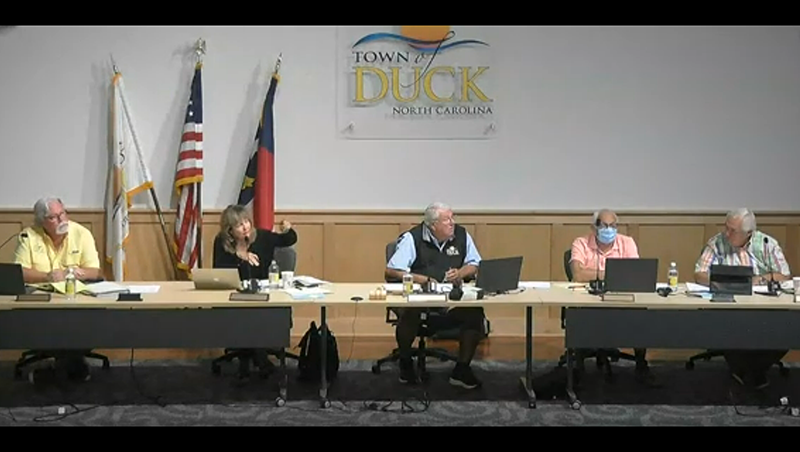 Safety concerns and traffic congestion were again the major opposition points voiced against a redevelopment project at 1248 Duck Road during the September 7 Duck Town Council meeting.

After an earlier Town Council rejection, modified plans to demolish the former Resort Realty real estate office building received a green light Wednesday on a 4-1 council vote. The structure, vacant since November 2020, will be replaced with two structures with a 49-seat restaurant, first floor retail space and second floor bedroom accessory dwelling units in each building.

According to David Klebitz, licensed civil engineer with Bissell Professional Group in Kitty Hawk, the project was scaled back and adjusted in response to council recommendations and a number of public comments.

His review of changes from a previous submission earlier this year included a building reduction from three stories to two, reduction of bedrooms from six to four, a 30 percent reduction in residential floor area from 3,360 sf down to 2,336 sf and a 15 percent reduction from 2,450 sf to 2,080 sf in retail space. Additions to the plan include an increase in the amount of pervious pavement from 1,887 sf to 4,356 sf, a 130 percent increase, and the addition of a designated turnaround area in the site’s northern parking lot.

Klebitz said also that an option to connect a boardwalk at the southeast corner, which was not part of the earlier design, was added, a dumpster bin relocated, the proposed lot coverage is now 47.3 percent, which is less than the 56 percent that currently exists there, and with the reduced retail and residential areas there was no longer a need nor a request for a parking reduction.

A rear setback reduction of 10 feet is still requested.

Far from an easy victory, council endured more than two hours of public comment and discussion before the vote of approval came.

With a half dozen people, many from the nearby Duck Ridge Shores area, on hand to voice concerns that there has been no traffic impact study, DOT would not approve the project due to inadequate parking, the lack of a turn lane there making the area unsafe, the site being overbuilt and the overall traffic nightmare at that location, there were about a dozen others that submitted written comments against the project.

In closing, attorney E. Crouse Gray Jr. spoke on behalf of property owner The Promenade at Duck LLC, pointing out that the proposal meets current ordinances. He noted also that while a lot of people testified to traffic issues around the project area, none were competent experts, adding that the competent experts who did speak said the project plans meet town ordinance requirements. He went on to say that there will be traffic issues even if a turn lane were there and that a recent traffic study of the area lists pedestrians as the biggest cause of traffic issues in Duck.

While he did not disagree that all ordinances have been met, Rob Mooney said he saw safety is an overriding issue.

“Changes made in the plan make it more palatable,” said Mooney, “and if we could get a turn lane there I would have no problem with it at all. But we don’t have one so I will not vote for it.”

Others took a different stand.

“I think this situation shows our process does work,” said Tony Schiano. “It’s different from what we started with, and they have gone through multiple changes. Twice before the planning board and twice before council.”

Adding that he agrees that safety is an issue, Mayor Don Kingston said, at same time, the applicant has met the ordinance and that overall traffic is an issue for everyone.

“We turned this down as overdeveloped,” Kingston continued. “And they scaled back. The majority of the planning board felt they accomplished what we wanted to achieve, and this one property cannot be the solution to traffic in Duck. Thousands of cars pass through every day and there are probably two houses going up in Corolla that will add more traffic than this development will.”

Before offering a motion to approve the project, Kingston recommended the north parking lot be designated with a sign for employee only parking, a requirement to which attorney Gray replied “if this change is one the town wants we can do that.”

Overall, the project has 18 conditions that must be met during development.

After a public comment that the building industry had not been able to provide input, it was determined that the proposal had been properly advertised and council voted 5-0 to make the recommended changes for runoff to be directed into an approved stormwater management system designed to accommodate runoff volume of 1.5 inches of rainfall over a two-hour period with specific low-impact development principles and best management practices that adhere to North Carolina on-site wastewater regulations and building code.

The third and final public hearing for the evening was to resolve a code conflict for dune walkovers.

Within separate, overlapping sections of code covering construction standards for walkways, a review of code found that one section of Town Code required walkovers be at least 18 inches above ground and another limits them to no more than 12 inches above grade.

The minimum 18-inch elevation for dune walkover structures was established in 2013 as an elevation allowing enough sunlight below a walkway to enhance the potential for dune vegetation which helps stabilize the dune system.

The code changes approved Wednesday set the standard for frontal dune walkovers in a setback at the 18 inch requirement in all situations and explains under what circumstances minimum setback exemptions can be granted.

Other business for the long evening meeting included the introduction of Brandon Molenda as the newest firefighter hired to work for Duck Fire. According to Fire Chief Donna Black, firefighter Molenda is a Currituck High School graduate and currently volunteers with Hatteras Volunteer Fire Department and Hatteras Island Rescue Squad.

Items approved in the consent agenda include August 3 regular session meeting minutes, a resolution in support of legislation concerning digging dangerous holes on the Beach, a resolution proclaiming the week of September 24 to October 2 as Diaper Need Awareness Week, a resolution supporting construction of a new bridge over the Alligator River connecting Dare County to Tyrrell County and its funding through the US Department of Transportation’s Bridge Investment Program, a proposed Government Access Channel attendance policy, a contract renewal with Axon Enterprises for Duck Police Department in-car cameras and a $103,773 budget amendment adjusting the FY 2023 budget to carry forward FY 2022 expenditures that were contracted but not completed in order to close the books for FY 2022.

During department reports, Black advised Fire Prevention Week is October 9-15 and Duck Fire will have an open house Tuesday, October 11, from 5 to 7 p.m. It was also noted that beach nourishment work in Duck is scheduled for mid-November to mid-December. This year the annual Duck Jazz Festival will begin with a Concert on the Green-style event from 4 to 6 p.m. on Saturday, October 8 and continue 10 a.m. Sunday, October 9 in the park with a full day of music on two stages.

The final announcement for the evening was that the next scheduled meeting will be a regular session meeting at 6 p.m. on Wednesday, October 5.