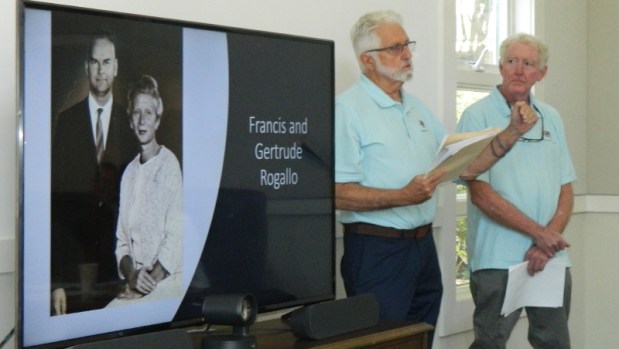 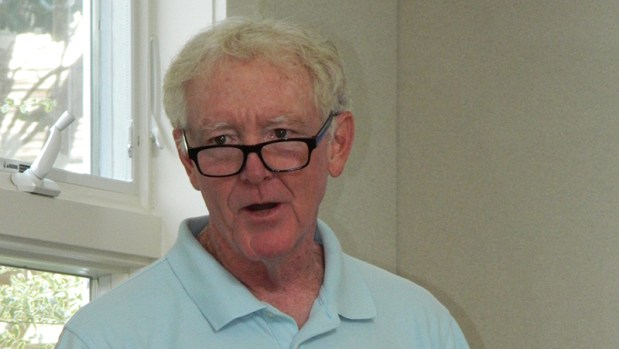 Billy Vaughn shared some of the history details behind the 1948 invention of the flexible wing by Francis and Gertrude Rogallo with Dare County Tourism Board members at their September 15 meeting. Philip S. Ruckle Jr. photo 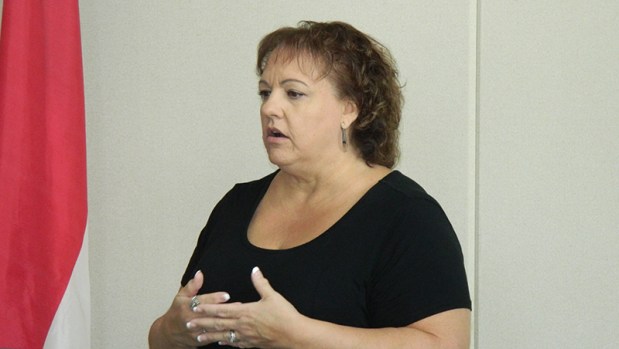 The Rogallos invented the flexible wing in 1948, an invention that led to the popular sport of hang gliding.

Francis was an aeronautical engineer with the National Advisory Committee for Aeronautics, the precursor to National Aeronautics and Space Administration, in Hampton, Va. The government’s lack of interest in his wing without rigid structures that maintains its airfoil shape in flight opened the door for the Rogallos to file for a patent in 1951.

In 1959 the most well-known and influential engineer at NASA, Wernher von Braun, saw Rogallo demonstrate a flexible wing glider and immediately recognized the potential of using flexible wings to recover rocket booster engines for reuse. During the 1960s the federal government spent more than $150 million on flexible wing research for all kinds of applications.

Before long, astronauts were learning to fly flexible wings with both Gemini and Apollo programs originally intended to be recovered by what is now called a para-glider. But President John Kennedy’s timetable to get to the moon coupled with booster rockets getting too large and powerful for flexible wing recovery led NASA to abandon the program.

That didn’t stop interest in or development of the wing.

Francis Rogallo conducted flexible wing experiments at Jockey’s Ridge in the late ’60s. By the early 1970s hang gliding was a very popular sport. The soft sand and consistent winds made Jockey’s Ridge the perfect place to fly.

When Francis retired from NASA in 1970, he and Gertrude moved to Southern Shores, making the Outer Banks their home. When possible development threatened the dunes, Francis was part of the effort to save them.

Established in 1992, the mission of the non-profit Rogallo Foundation is to honor the Rogallos and preserve their records, artifacts and research.

Part of that mission includes building a museum with educational opportunities utilizing tangible objects for programs and exhibits to preserve and interpret the Rogallos’ story behind the invention and evolution of the flexible wing – and Jockey’s Ridge State Park is the ideal location for a museum to honor the Rogallos and their invention.

Making a brief separate presentation of her own, Becky Huff with the Dare County Tax Office explained to board members many of the details behind tax collections for short term rentals from hotels, property management companies, online travel companies and individual owners.

During his report, board treasurer Ervin Bateman advised that calendar year receipts show August occupancy receipts of $2,025,876.87 for July were up 27 percent and $40,729 for prepared meals was up 7 percent from the same time in 2021. The combined calendar year total receipts of $825,116.34 for both are up 12 percent over prior year actuals.

In her report, Jamie Chisolm advised that the Grants Committee was faced with 18 grant requests for a total of $283,500. After a careful review of the potential return on investment and the number of people an event will draw, the committee recommended the following award amounts:

Following the report, board members voted to approve the recommended grant amount.

Also noted was a full schedule of events at the Outer Banks event site in Nags Head:

The next regular Dare County Tourism Board meeting is scheduled for 9 a.m. on October 20 at the Manteo office. The November 17 meeting is expected to be at 9 a.m. in Buxton, provided the details can be worked out.