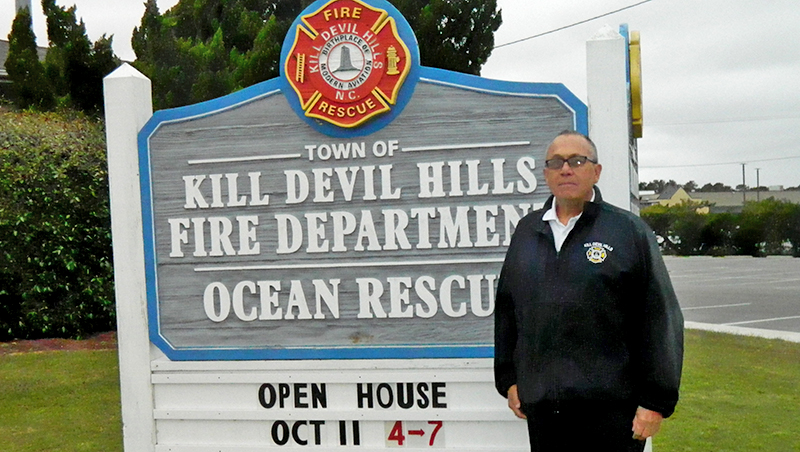 Kill Devil Hills Fire Marshal John L. Risoldi Sr., who often says every day is a fire prevention day, encourages attending a Fire Prevention Week open house to learn more about how simple but important actions that can help you and those around you be safer from home fires. Philip S. Ruckle Jr. photo

The Fire Prevention Week theme for this year is: Fire won’t wait, plan your escape!

An appropriate theme considering that once a smoke alarm sounds, you have at most just two minutes to safely evacuate the structure.

Fire Prevention Week, which begin in 1922, is sponsored by the NFPA and observed each year during the week of October 9 in commemoration of the Great Chicago Fire, which began on October 8, 1871 and caused a devastating amount of damage. This horrific conflagration killed more than 250 people, left 100,000 homeless, destroyed more than 17,400 structures and burned more than 2,000 acres of land.

In 1925, President Calvin Coolidge proclaimed Fire Prevention Week a national observance, making it the longest-running public health observance in our country. During Fire Prevention Week, children, adults and teachers can learn how to stay safe in case of a fire at local fire stations where firefighters provide lifesaving public education in an effort to drastically decrease casualties caused by fires.

This year marks the 100th anniversary of Fire Prevention Week™.

During her comments at a recent Duck Town council meeting, Duck Fire Chief Donna Black pointed out that house fires today burn hotter and faster than in just a few years ago.

The difference is in part due to how homes are built and the materials that make up the contents of homes. Not too long ago, that escape zone was seven minutes.

This coming week, Fire Prevention Week activities at several local fire departments will be aimed at educating everyone about simple but important steps they can take to keep themselves and those around them safe from home fires. Among them is the ability to get out of a home during a fire requires an early warning from smoke alarms and advance planning.

Fire safety education is not limited to just school children. Equally at risk in fires are teenagers, adults and the elderly. So it is important for every member of the community to take some time every October during Fire Prevention Week to make sure they understand how to stay safe in case of a fire.

More than one-third of those fires occurred in or on residential structures at a rate of one reported every 93 seconds, a home fire injury every 47 minutes and a home fire death every three hours and eight minutes.

It is interesting to note, however, while the number of house fires in the US have decreased, the number of fatalities are the highest since 2005.

Nearly three out of every five of those fatal home fire victims were 55 years old or older with more than 20 percent of the people who were non-fatally injured between 25 and 64 years of age.

Some simple but important fire safety steps you can take today include having a home fire escape plan and practice using it.

Being prepared in advance can go a long way toward helping everyone know what to do when the smoke alarm sounds. Given that every home is different, every home fire escape plan will also be different.

Have a plan for everyone in the home including children, older adults and people with disabilities who may need assistance to wake up and get out. Make sure that someone will help them make the most of that two minute window.

According to the NFPA, properly installed and maintained smoke alarms play a vital role in reducing fire deaths and injuries. Smoke alarms sense smoke well before people can, alerting residents to a potential danger, so if there is a fire in your home, smoke spreads fast and you need smoke alarms to give you time to get out.

However, in fires where smoke alarms were present but did not operate, at least two of every five of those smoke alarms had missing or disconnected batteries. Furthermore, dead batteries caused a little more than one quarter of the smoke alarm failures.

Once you have them and confirm they are working properly, smoke alarms are needed in every bedroom, outside of the sleeping areas, and on each level of a home including basements and attics. Smoke alarms are not needed in kitchens and bathrooms.

Always select an alarm listed with a testing laboratory. That ensures you get one that meets standards for protection.

For the best protection, use combination smoke and carbon monoxide alarms that are interconnected throughout the home. These can be installed by a qualified electrician, so that when one sounds, they all sound. This ensures you can hear the alarm no matter where in your home the alarm originates.

Once you have smoke alarms in place be sure to change detector batteries twice a year, test them frequently and replace any that are 10 years old or older. Most fire departments respond to a high number of false alarms due to malfunctioning smoke detectors, so changing batteries and replacing old detectors helps minimize those calls and ensures that all devices are working well when needed.

In addition, sprinklers combined with smoke alarms are known to reduce the risk of fire fatalities by 82 percent.

Another good practice is to have a fire extinguisher on every level of your home with one near each exit as well as one in the kitchen. Look for one large enough to put out a small fire but not so heavy as to be difficult to handle.

And while fire extinguishers are an important home safety tool, be sure you know how to use it. Every local fire department has someone willing to provide instructions on the proper use of a fire extinguisher.

Fire Prevention Week offers a great opportunity to visit a nearby fire department. Several are holding open house events which offer an opportunity to meet local firefighters, see a department’s apparatus and equipment and learn more about how simple but important actions that can help you and those around you be safer from home fires. Food and drinks will also be provided. 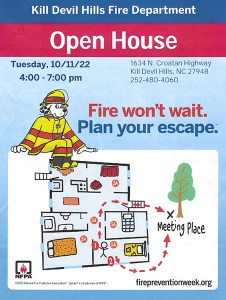