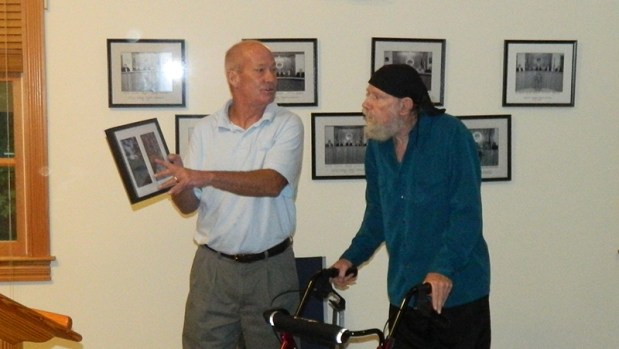 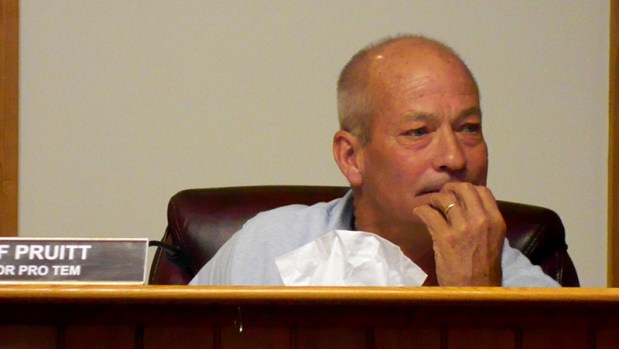 According to Pruitt, Heffner came to Kitty Hawk about 26 years ago and during the following years served on the town’s Recreation Committee from 2013 to 2022 and attended more than 600 Planning Board and Town Council meetings. Heffner was also credited with often making suggestions or improvements to recommended plans or actions at those meetings.

“You are one of a kind,” added Mayor Craig Garriss, “and we thank you and appreciate what you have done for this town.”

A plaque recognizing Heffner’s support has been placed on a tree at Sandy Run Park.

On a more somber note, Garriss read a news release issued just prior to Monday’s meeting saying that Kitty Hawk Police Department was dispatched to the 4000 block of Smith Street October 1 in response to a 911 call for a dog running at large and being aggressive towards children. The officer discharged his duty issued weapon to stop the attack and unfortunately the dog did not survive.

The news release ended with a statement that an investigation will take place to ensure the town’s policy and criteria for discharge of a service weapon were followed.

During public comments Lynette Fenton, along with other family members and neighbors, gave a lengthy, graphic account of their version of the Saturday incident and how events unfolded.

An additional press release issued the afternoon of October 4 stated that an “internal investigation is underway and the findings will be made available to the general public when complete.”

It further stated that town manager Andy Stewart “placed the officer involved on Administrative Leave pending the outcome of the investigation.”

Other public comments were directed toward an ongoing attempt to regulate itinerant merchants and outdoor events.

While most comments were in favor of less restrictions on special event sales, Garriss pointed out that there were some comments asking for tougher restrictions and even a few to prohibit them altogether.

At a previous meeting, council lifted a moratorium on special event permits only to have several requests denied.

Varnell went on to say it was not the event itself that triggered a rejection, but it was the location itself since code requires an event be unique to the property. So if a business at that location had similar retail items, town code prevented having an event there.

During discussions, Pruitt agreed to lead a committee to review related regulations and, if possible, find a compromise. Then, after first rejecting recommended changes to Sec. 16-1 and Sec. 18-11, council revisited them and passed a motion with changes that opens the door to allowing up to six two-day permits within any 12 month period.

Other business for the night included scheduling a November 7 public hearing on a proposed amendment to raise the maximum building height in a planned commercial development from 35 feet to 45 feet and approval of a consent agenda that included September 6 council meeting minutes, a $41,799 budget amendment and authorization to purchase a vehicle for town hall administration services to replace a 10-year-old vehicle, acceptance of a $100 Joe Lamb Realty and Associates, Inc. donation to the fire department designated for training, a resolution authorizing campground occupancy tax overpayment refunds, $167,450 building demolition contract with East Coast Demolition for portions of the recently purchased building at 5200 N. Croatan Highway, annual $69,932 lease agreement with Bear Drugs, Inc. Suites 10 and 11 in the recently purchased building at 5200 N. Croatan Highway with $794.45 per month for maintenance of the common areas and operating expenses.

Also part of the consent agenda was a resolution setting 2023 Town Council regular session meetings at 6 p.m. on the first Monday of each month unless that first Monday is observed as a town holiday. Those meetings will be rescheduled for the following Monday, January 9 and Tuesday, September 5. In addition, council meetings begin at 5 p.m. when the Dare County Board of Elections use the Smith Room for an election following a council meeting. The resolution also adds a tentative 9 a.m. January 30 capital improvements plan workshop and a 9 a.m. April 24 budget workshop.

At the end of business, council adjourned until the 5 p.m. November 7 meeting.