Tour highlights benefits of College of The Albemarle’s Barco campus 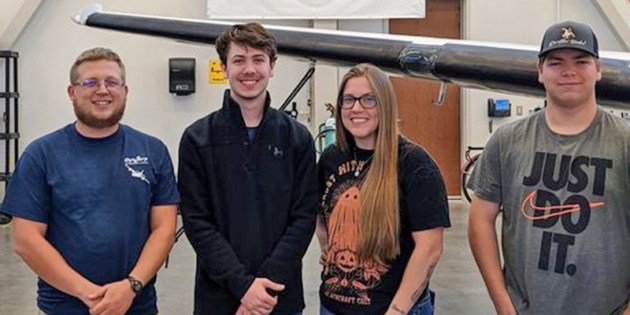 College of The Albemarle aviation students who passed a recent general FAA written exam on the first attempt include, from left, Austin Latty, Caleb Wilkerson, Sandra Bates and Ashton Marshall. All are now one step closer to becoming a certified airframe and powerplant mechanics. Courtesy COA 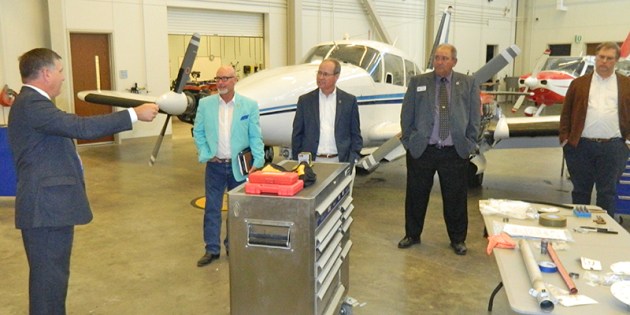 Planning for the future is an essential step toward reaching any of life’s goals and having a solid education has long been known to have a direct impact on anyone’s financial stability. But as a local community college is proving, that education does not have to be a four-year program to help students achieve success.

One hidden gem available to help local students with their education plans is College of The Albemarle.

According to a May 19, 2022 U.S. News & World Report article, close to 30 percent of U.S. undergraduates are enrolled at public two-year colleges.

Established in a remodeled Elizabeth City hospital during the early 1960s, COA is northeast North Carolina’s first community college within a statewide network of 58 public community colleges. Over the years, COA has grown from an initial class of 113 students to an annual enrollment today of more than 3,000 students with classes at Elizabeth City, Edenton, Manteo and Barco.

Newest of the college’s four locations, the facility at 107 College Way in the Currituck Community Park in Barco opened in 2013 offering state-of-the-art programs for aviation technology, computer integrated machining and computer-aided drafting in addition to a host of general education classes.

During an October 20 tour of the Barco campus, College of The Albemarle President Jack Bagwell led a number of guests through an aviation classroom that includes several hundred square feet of hanger space in addition to an outdoor runway explaining that students work on all types of planes with their hands rather than a keyboard.

Along the way, Bagwell pointed out that while there are typical classrooms, others like the powerplant room, where students work on turbine and piston driven engines, operate sandblasters and parts cleaners, are anything but typical. There is also a sheet metal shop and paint booth.

“Flexibility has to be central to everything we do,” said Bagwell. “A science lab today might be an HVAC lab tomorrow. So we have to be flexible.”

Another key point is that while some people think a community college only serves local residents, in reality there are students driving long distances to be here.

“That is largely true but not always the case,” Bagwell explained. “The college I came from in South Carolina was much like this one and we had programs that drew people from Alaska and Florida into South Carolina. Our aviation program has a similar draw because there are not many of them.”

Walking through the aviation hangar, he went on to say that while enrollment numbers are down at almost all colleges, he feels new FAA guidelines will allow added flexibility for learning centers that will in turn could allow recruiting more students into the program.

“We have done a disservice to our kids by telling them there is only one pathway,” Bagwell continued. “Telling them they have to be a doctor, a college professor, you have got to be a whatever does not help the student.”

In agreement with that point was a member of the tour group, U.S. Rep. Greg Murphy, R-N.C.

“I agree with your point that we have done a disservice by pointing everyone into a four year degree program,” said Murphy. “So much of that is being seen with student debt. The idea that all students need to pursue a four-year degree is absolutely absurd.”

Murphy then added that he thought the early high school and college program is fantastic because it will introduce students at a younger age to the idea that they do not necessarily need a four year school.

“Through a trade program they can gain an excellent education and have a fantastic career and a wonderful life,” he added.

Speaking to the student debt issue, Bagwell then related an experience where he has seen students spend a couple hundred thousand dollars or more to get a job that pays $50,000 a year with debt. The flip side of that is a student could enter a trade program and after one or two years be making $75,000 to $100,000 a year with no debt.

“Who’s the smarter kid at the end of the day?” he asked.

Adding to the discussion, North Carolina House of Representatives for the 6th District Paul O’Neal, also a member of the tour group, related the experiences of two local families.

One student graduated from the CAD program in his 20s and is working at the Coast Guard base for $30 an hour. The other student one semester short from completing the program was employed by Caterpillar and is now making more than $30 an hour.

“These are young people,” said O’Neal. “They didn’t spend hundreds of thousands of dollars to go to a college. They came here and left here debt free. I would say that’s like getting an advance past the starting line ahead of everybody else. And when you consider that community colleges get 54 cents of every dollar that universities get, I would say we do a much better job of turning out productive citizens than universities do. We don’t do gender studies and things like that. We teach people how to work, and give them skills so they can go out and become productive citizens.”

Bagwell then pointed out the little-known fact that COA does not do federal college student loans.

“Some students do build that kind of debt at other community colleges,” Bagwell explained. “But students coming to COA are not saddled with a lot of debt. Students can get private loans, we had four this year, but we don’t promote that necessarily.”

For those that need financial help, private scholarship money is available along with workforce development funds and several North Carolina programs that have funds available.

“We actually made a conscious decision years ago when I was on the board to not do federal student loans,” explained O’Neal.

“Yes, we did take them years ago,” Bagwell added. “But then we stepped back. Enrollment is down at community colleges and even here at COA, but we don’t want to grow for growth’s sake. We focus on quality programs and the partnerships we have in place help us do a pretty good job.”

COA also offers high school juniors or seniors with a 2.8 or higher grade-point average a dual-enrollment program that can help accelerate the completion of college certificates, diplomas and associate degrees, important steps that can lead to college credit transfers or provide entry-level job skills.

For those interested, COA offers credit programs for degree-seeking students who want to transfer credits to a four-year school or acquire a two-year degree in addition to several noncredit classes for anyone who wants to enhance or learn skills for a job or to take classes for fun or personal interest.