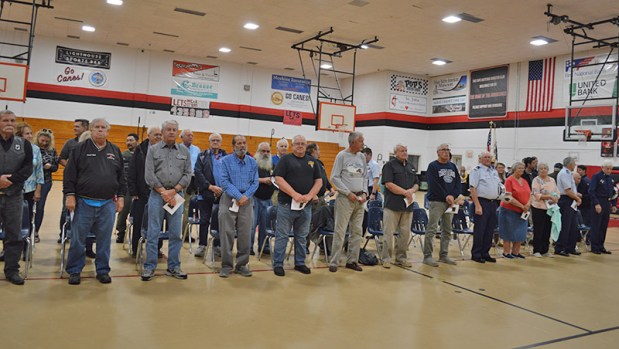 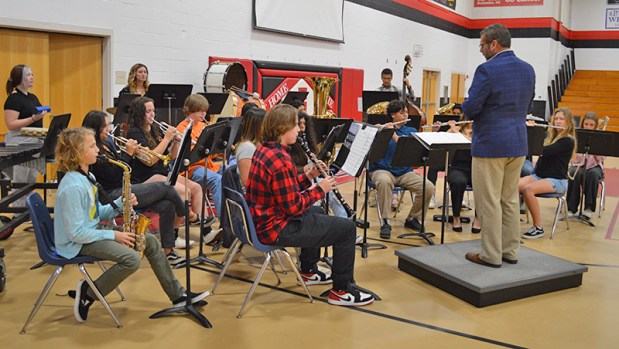 The Cape Hatteras Secondary band concluded the Veterans Celebration with “God Bless the USA.” Band students will present a winter concert on Dec. 13 at 6 p.m. in the campus auditorium. Mary Helen Goodloe-Murphy photo 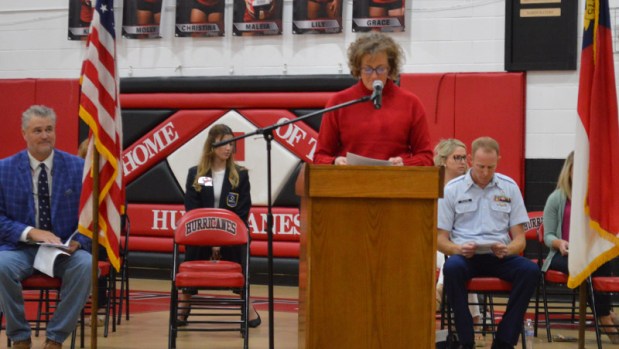 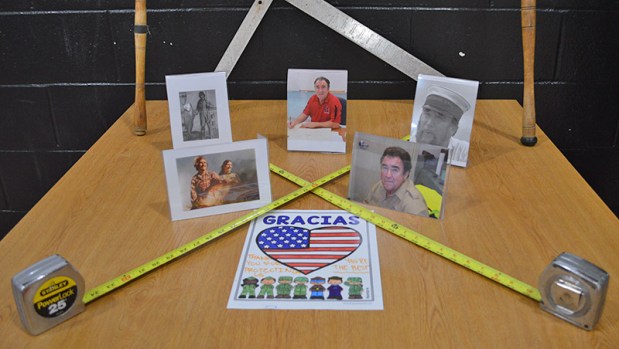 A display saluting Elvin Hooper, who passed on last November, was arranged at the Veterans Celebration Nov. 16, 2022. A display held photos of Hooper in his various community roles. Two yellow tape measures are crossed signaling his career teaching “shop” or carpentry I, II and III. Mary Helen Goodloe-Murphy photo

The celebration was originally scheduled for Nov.  9, but the threat of dangerous Hatteras Island weather caused a delay.

A Cape Hatteras Secondary drumline from the school’s band provided marching beats for the veterans and active duty military members to enter the school’s gymnasium.

“Today is set aside to thank all those among us who, despite the risk and sacrifice, raised their hand to serve and defend our country – our veterans, active-duty service members, guardsmen and reservists,” said Beth Rooks, principal of Cape Hatteras Secondary.

Rooks also acknowledged “families of service members and veterans who help shoulder the weight of war and the burdens of sacrifice. To the mothers, fathers, spouses, and children of our military men and women – thank you.”

Event organizer Keith Durham saluted one person missing from this 2022 edition of the veterans event – Elvin Hooper, who passed on last November. A display was arranged with photos of Hooper in his various community roles. Two yellow tape measures were crossed signaling his career teaching “shop” or carpentry I, II and III.

The band led the recognition of the veterans, playing music particular to each service. Veterans stood for their service. Those serving in the U.S. Coast Guard outnumbered other military services.

Teacher Jessica Polk is the granddaughter of a man who served in the first special services unit, a predecessor the Green Berets. She asked those with a child in active duty and veteran Gary Kierney stood up. She asked students of those with a parent on active duty to stand and 13 students did. As she went through a list, more students stood. By the end, almost all of the students filling one side of the gymnasium’s bleachers were standing, declaring connections to the armed services.

The guest speaker for the occasion was Executive Officer of U.S. Coast Guard Hatteras Inlet Bryan Ballenger. He started his address by citing Red Skelton’s parsing of the Pledge of Allegiance.

Those that answer the call to military service are willing put on a uniform, leave family and be deployed all over the world, said Ballenger.

Binding those who serve together are core values. For Ballenger and the U.S. Coast Guard, those values are honor, respect and devotion to duty.

Also, a binding force is history. A small minority of individuals – less than one percent of the U.S. population – serve in the armed forces. After Ballenger spoke, Durham called the roll of veterans who have died from 2019 to the present. The names of 35 service members were called. After each name, a chime sounded.

Before the 10 a.m. program, breakfast was served in the campus cafeteria. Students in food classes prepared three casseroles: egg and sausage, hash browns and French toast. Providing a fruit tray was Conner’s Supermarket. Others providing breakfast fare were Duck Donuts and Food Lion.