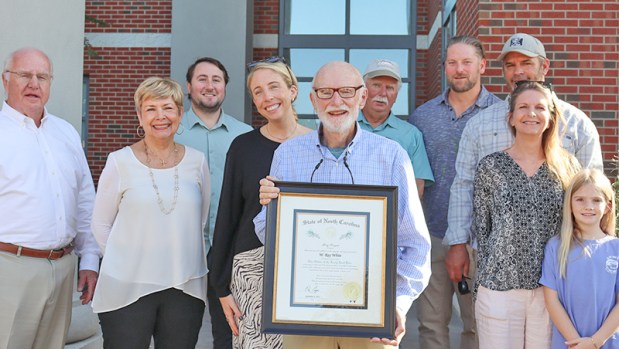 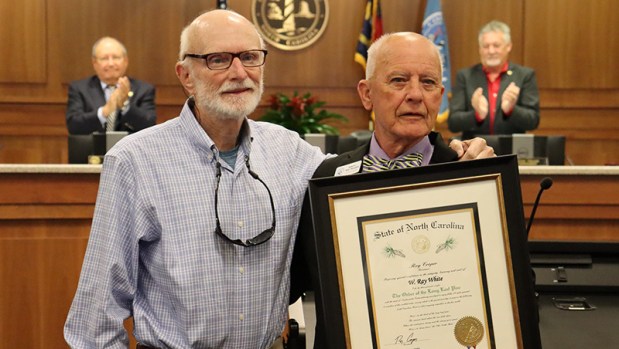 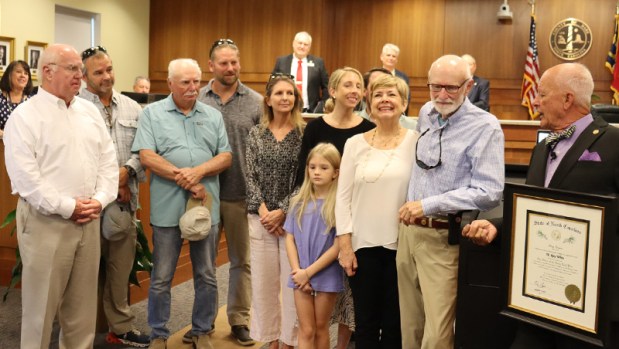 Ray White stands with his family at the front of the Board of Commissioners meeting room as Chairman Bob Woodard presents his award. Courtesy Dare County

Ray White, whose dedication to public service and the nonprofit community of northeastern North Carolina has spanned more than five decades, has received the prestigious Order of the Long Leaf Pine award.

Since its creation in 1963, The Order of the Long Leaf Pine has been awarded to individuals whose exemplary service, extraordinary achievements and substantial contributions to both their communities and the state of North Carolina go above and beyond the call of duty, making a significant impact and ultimately strengthening the state as a whole, noted a Dare County press release.

“For nearly 50 years, Ray has faithfully demonstrated how volunteer service benefits communities,” said Woodard. “He’s helped the people of the Outer Banks by generously sharing his time and talent with many grassroots organizations and advisory boards. He’s a retired banker and has been a role model by inspiring generations of his neighbors to give back to others.”

White worked alongside author David Stick, actor Andy Griffith and others to establish the Outer Banks Community Foundation. He is credited with being the board’s longest-serving director, having served for three separate terms for a total of 16 years throughout its 40-year history. Over the years, the organization has awarded more than $12 million in grants, scholarships and disaster relief funding to those in need in the Outer Banks community.

Woodard also highlighted the fact that White was “an early, insightful visionary who foresaw the economic and cultural opportunities that tourism could bring to the coastal communities of the Outer Banks,” noting how he has helped to strategically guide the Dare County community through times of unprecedented growth through his involvement with local organizations such as the Outer Banks Visitors Bureau and Outer Banks Chamber of Commerce.

“I cannot think of a more deserving individual than this man who stands before you today,” said Woodard. “This is about respecting and honoring our citizens who do good work for our county, and that’s what this is all about, Ray. It could not be more well deserved by anyone else other than you. Congratulations!”