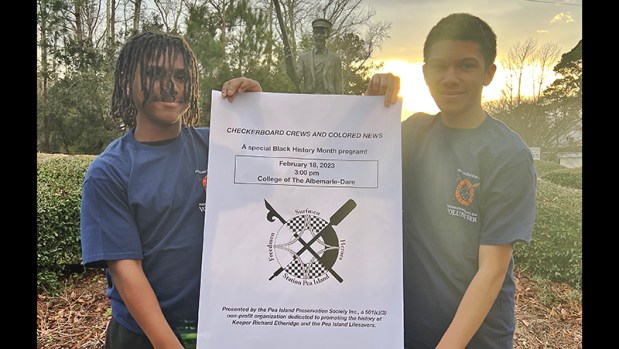 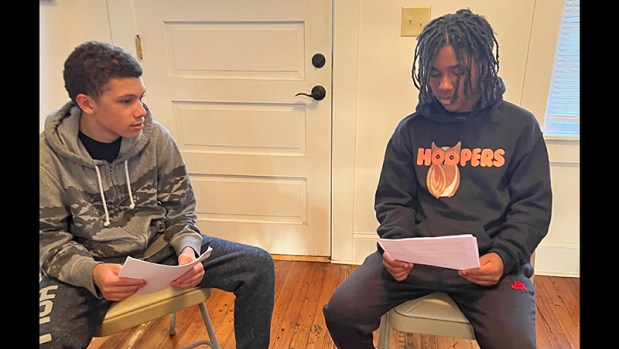 The Pea Island Preservation Society, Inc., (PIPSI) is pleased to announce the special Black History Month program “Checkerboard Crews and Colored News” to be held on February 18, 2023, at 3 p.m. at College of The Albemarle – Dare, a location where the second floor lounge of the new building has been named the Keeper Richard Etheridge Lounge. This program is being held as part of PIPSI’s continuing efforts to raise awareness of black history in this area.

The program will feature the unveiling of a new painting, The Checkerboard Crew, by the artist James Melvin, a painting designed to bring additional support and attention to making the black history of the area broadly known.

This program will also include a special presentation about various sites connected to the black history of this area besides the Pea Island Cookhouse Museum in Manteo, a location which primarily focuses on the story Etheridge, who was once enslaved on Roanoke Island, and the all-black crew he commanded. Each of the sites on Roanoke Island are designed to provide a deeper understanding of the area’s black history and a more inclusive community.

“Checkerboard crews,” a term used to identify integrated crews in the United States Life-Saving Service with white and black surfmen, is a poignant reminder of the need to raise awareness. Sadly, today still many do not know the inspiring story of Keeper Richard Etheridge and the Pea Island Lifesavers. Yet alone, the story of integrated crews that Etheridge and other blacks served on. This history has been overshadowed by the more popular historical events here, such as the Lost Colony and the famous Wright Brothers’ first flight.

“Colored news,” a section in certain southern newspapers during the Jim Crow era, published limited news about “colored” people (people who today are referred to as black), is yet another important reminder of untold history. Typically, this section contained just one or two sentences or paragraphs, brief, nice-to-know information such as news about people who were visiting from out of town, birthdays, family gatherings, etc., but nothing substantive.  Using the words “colored news” as part the program name for this upcoming event is intended to be a reminder of overlooked history. Unfortunately, many today have little or no knowledge about the black history of Roanoke Island, particularly about the lives of the enslaved, free people of color, mulattos, and Native Americans (who frequently were identified as being black) who also lived here and in surrounding areas. Like the Colored News section in old newspapers, their stories have been overshadowed by other more popularly known historical events here, or simply not made known.

Titled to remember this, our program and unveiling of the new painting The Checkerboard Crew is intended to raise curiosity and to promote and encourage a deeper understanding of the black history of Roanoke Island.

Mr. Melvin’s art has played a key role in our continued efforts to raise awareness of the black history in this area. His series of paintings of Keeper Richard Etheridge and the Pea Island Lifesavers are displayed at the North Carolina Aquarium on Roanoke Island and at the Pea Island Cookhouse Museum in Manteo. Images of his paintings are also used in PIPSI’s education initiative, Freedmen, Surfmen, Heroes, that includes a popular live program about Etheridge’s life, the role of the USLSS, and their heroic October 11, 1896 rescue of nine on board the shipwrecked E.S. Newman during hurricane conditions. PIPSI plans to display

Mr. Melvin’s new painting at the Pea Island Cookhouse Museum located in Manteo and to make arrangements for this painting and others to periodically be displayed at other locations in the community.

Please mark this date on your calendar. As we move closer to the event, additional details will be provided about this upcoming event.