May-05-fire.jpg
Smoke from a fire near U.S. 158 in Coinjock May 5 was visible from several miles away. Traffic in both directions was blocked when firefighters ran a water supply hose across the highway from a hydrant to the fire. (Photo by Sharon Bryant)

Currituck-fire.jpg
Area firefighters responded to a storage shed fire north of U.S. 158 in Coinjock May 5. There were no reported injuries and fire trucks cleared the area about 9 p.m.  (Photo by Sharon Bryant)

Traffic was backed up on U.S. 158 in Coinjock for about 90 minutes this past Saturday while firefighters extinguished a nearby storage shed fire in the 100 block of Full Brick Lane.

The fire that started around 5:30 p.m. sent plumes of black smoke high into the sky that could be seen from all directions several miles away. When firefighters arrived a large diameter supply hose was run from a fire hydrant on the south side of Caratoke Highway across the road to the fire on the north side.

Police stopped traffic in both directions near the Quality Plus Shell station in order to prevent motorists from running over the hose and damaging it. The backup was estimated to extend more than two miles in both directions.

According to witnesses at the scene there were propane tanks near the fire and had firefighters not responded as quickly as they did the fire could have spread to a nearby residence.

There were no reported injuries and traffic was moving again shortly after 7 p.m. Fire trucks cleared the area about 9 p.m.

A call Monday to the Crawford Township Volunteer Fire Department failed to produce any additional information. The person answering the phone there said it is a volunteer fire department and he did not know who had any information. 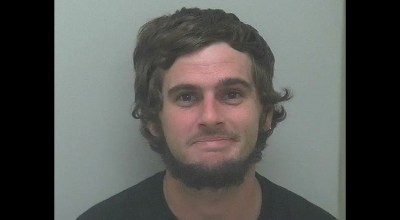