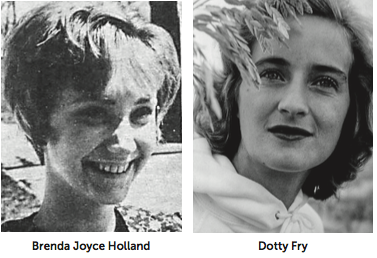 On Monday, April 7, 1986, the SBI received what should have been resolution in the unsolved 1967 homicide of Brenda Joyce Holland: A case insider spoke out about a confession from her ex-husband. And the insider was a Dare County elected official.

The previous Dec. 12, W.W. Campbell, an SBI supervisor, had entered a short note in the case file saying that he “has had several telephone conversations with a Mr. Ray Py” who works with “the local paper in Kill Devil Hills, The Outer Banks Current. He has run two long publications in his paper about the death of Brenda Holland. Mr. Py request [sic] that a private detective, Mr. Ken Whittington, and a Ms. Dottie [sic] Fry, Register of Deeds, be interviewed reference [sic] Brenda Holland’s death.”

Whittington had become the Manteo police chief shortly after Brenda, a makeup supervisor at The Lost Colony outdoor drama on Roanoke Island, vanished. Following a massive search, her strangled body was found in the Albemarle Sound near Mashoes on July 6, 1967. Whittington clashed with Dare County Sheriff Frank Cahoon over the case. That confrontation happened because Whittington pushed a mentally challenged local man, Dennis Midgett, into stating he was riding shotgun with a man who picked Brenda up in his car and killed her. That whole 1968 statement proved to be false.

Whittington ended his controversial time as chief when he resigned in 1974.

Fast forward to 1985, when he supported Py, a crusading newspaperman, in his quest to prove that Linus Edwards, who’d once been Manteo’s only dentist, killed Brenda.

Dotty Fry was married to Edwards at the time of the killing. He had beaten Fry repeatedly, according to the SBI file, once to the point that she had to be hospitalized. Trying to raise two small children from her first marriage, Fry was apparently terrified of talking to investigators about Edwards, who’d long been a suspect in Brenda’s homicide. Cahoon, who’d been sheriff since 1946, didn’t press her on the matter. He even told SBI agents that she probably wouldn’t talk. They didn’t push her.

Like Cahoon, the agents seemed much more interested in a man Brenda had dated on the last night of her life, Lost Colony chorus singer Robert Daniel “Danny” Barber, a veteran of the U.S. Army band and student at the University of North Carolina at Chapel Hill. After work on Friday, June 30 and into the early morning hours of Saturday, July 1, they’d been to the Drafty Tavern, a local dive where Pirate’s Cove now is, then over to Jeanette’s Pier on the Nags Head beach, by Jockey’s Ridge and finally back to the house on Burnside Road in Manteo that Barber shared with two other men. Barber ultimately told investigators that he fell asleep on the date. And when he awoke, Brenda was gone.

There’s strong evidence he was telling the truth, and Edwards attacked Brenda as she tried to walk to her rented second-floor room in Dick and Cora Gray Twiford’s frame house on what is now Ananias Dare Street.

But year after year, investigators concentrated on Barber, seemingly ignoring just how strong a suspect Edwards was. So the case remained unsolved. Barber always had the case hanging over him. Brenda’s parents and three siblings tried to go on with their lives, but the family’s heart was still back there with Brenda, floating in the summer of 1967.

Finally, on the Monday afternoon in the spring of 1985, Dotty Fry was ready to give the case a push. At 12:20 p.m. in the old brick courthouse in downtown Manteo where she worked, Fry sat down for a private meeting with SBI Agents W.M. Thomas, W.A. Hoggard and Ken Bazemore. “The evening of the homicide, Ms. Fry and her husband, Dr. Edwards, had a violent argument that started at their residence,” Agent Thomas wrote. “Dr. Edwards had become an abusive husband and had assaulted Ms. Fry on several occasions. Ms. Fry stated that she ran out of the house to get away from the physical attacks of Dr. Edwards. She ran to a neighbor’s house to hide from her husband. Ms. Fry stated she saw Dr. Edwards pass the residence looking for her later that evening.

“Ms. Fry feels that due to Dr. Edwards’ insanely intoxicated condition that he continued to look for her all evening. She felt that from the state of mind that he was in, that he possibly met Brenda Joyce Holland walking back to her residence, and due to the physical similarities of their appearance, he mistakenly picked her up and later strangled her … Ms. Fry felt that due to the friendship of Sheriff Frank Cahoon and her husband, the investigation was not very thorough … She wishes that all suspicions of … Danny Barbour [sic] could be removed. In her mind, she sincerely feels that her husband, Dr. Linus Edwards, is the main suspect,” Thomas wrote.

Fry told the agents that her husband, when drunk, would claim that he had murdered Brenda.

Fry’s statement was solid and corroborated by earlier witness interviews by the SBI. Edwards and the sheriff lived in the same upscale area of Manteo, Mother Vineyard. Cahoon didn’t press Edwards as hard on the case as he could or should have, judging from my study of the SBI file.

The SBI said nothing about Fry’s 1986 statement to neither Brenda’s family nor Danny Barber. It took Py, the reporter, to finally get the word out four months to the day after Fry talked to the SBI. In addition to his work for the Current, Py also wrote stories for other publications. On Aug. 7, 1986, The Carolina Coast, a tabloid of the Virginian-Pilot, published a story by Py headlined “Woman believes she was meant to be the victim in 1967 murder.”

Fry confirmed in the story that she talked to the SBI, and essentially told Py the same story.

She added that her husband threatened to kill her in their soundfront house on what is now Puddle Lane. She fled to the neighbor’s house on the Friday night Brenda vanished. From what I’ve found, a close female friend apparently picked Fry up at the neighbor’s house. They rode around Manteo, making a quick stop at Danny Barber’s Burnside Road residence. Fry was friends with one of Barber’s roommates, a man she worked with at Westvaco. Apparently, no one was home yet, and Fry and her friend eventually went back to her friend’s house.

When Edwards saw her back at their house the Saturday morning after Brenda vanished, Fry told Ray Py, “he turned white as a sheet of paper.”

Fry would soon come to realize what prompted her husband’s reaction: He realized he’d killed the wrong woman. “When he became angry, or drank too much, he would tell me he did it,” Fry told the reporter. “Then later he would deny it.”

She noted that she and Brenda, both with blonde hair and softly attractive features, “looked very much alike.”

“I was in the same neighborhood as Holland and I think he came looking for me and found her … Dr. Edwards was very intelligent, very strong, and very abusive to me when he drank,” Fry said.

Edwards knew of Fry’s friendship with Barber’s housemate and was jealous of the friendship.

Edwards and Fry separated in 1969 and divorced in 1970. Edwards, alone in the house they’d shared, fatally shot himself on Valentine’s Day, 1971.

“When he died, he left no note and no one could understand why he shot himself,” Fry told the reporter. “It is all circumstantial about Dr. Edwards but I have always felt in my heart that he was responsible.”

Whittingon, the former Manteo chief, said in the story that he told the SBI that he had talked with several people who could support the theory that Brenda was murdered when she was mistaken for Edwards’ wife.

Cahoon, who’d retired in 1982, disagreed with the mistaken identity theory. He didn’t name Barber. But the former sheriff told the reporter he believed Brenda died of suffocation from a pillow or blanket, an implication that he was still fixated on Barber, even though the medical examiner’s ruling of death by strangulation had never been challenged.

Fry is elderly now and indicated to me last month that she doesn’t remember the case.

Cahoon is dead. So are Py, Whittington and Dennis Midgett, the suspect Whittington had once wrongly targeted in the case. And the suspect Cahoon and the SBI had wrongly concentrated on, Danny Barber, who came to be known as Dan, graduated from Carolina, rose up to the top ranks of Sara Lee Hosiery and raised two daughters with his wife before dying in 2011 at the age of 68.

The botched investigation had shadowed him, just as it still does the Holland family.