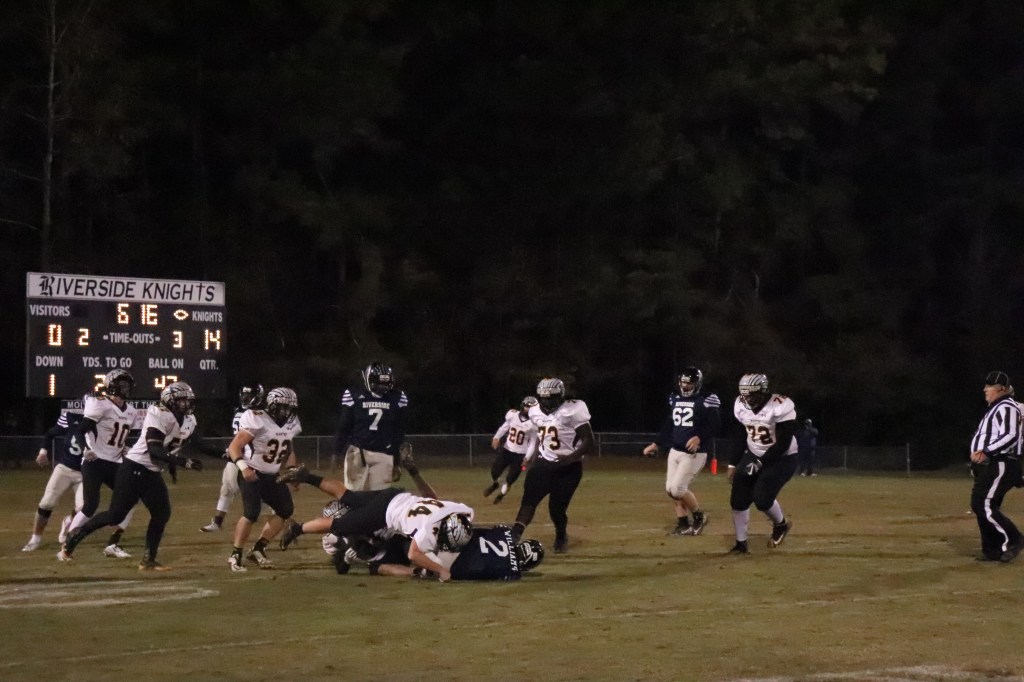 Adding insult to injury, Riverside added a third touchdown five minutes later to put the Knights up 21-0 at the end of the first quarter and another 20 points in the second quarter for a 41-0 halftime lead.

Although Manteo was able to put together penetrating drives with several first down plays, Riverside contained the Redskins throughout the first two periods often leaving the Redskins fourth and long. Unable to generate any sustained momentum, Manteo failed to cross the midfield line into Riverside territory until well into the third quarter.

After a back-and-fourth battle, better ball control helped Manteo put together its first scoring threat of the night near the end of the third quarter moving the ball inside the Riverside 20. The fourth quarter opened with Manteo inching toward the end zone. With 9:10 to play, Manteo quarterback Bryson Sawyer took a high snap and ran the ball in from about the 3 to put the Redskins on the scoreboard. The point after kick failed making it a 41-6 game.

Riverside responded on its next possession with an 85 yard touchdown pass play to make it 48-6 with 8:19 left to play.

Grinding it out with a second half ground game, the Redskins worked the ball back down to the five, where Wolfie Schultz was able to break through for Manteo’s final touchdown. The extra point kick by Ryan McOwen made it the 48-13 final with just over two minutes left to play.

Friday’s loss left Manteo with a 3-2 conference record and 6-6 overall season. Riverside is now 9-3 overall with a 4-2 conference season and will face Princeton at 7:30 p.m. on Friday, November 23.

In other varsity football action Friday First Flight was at Lexington, where North Davidson established a 49-point first half lead over the Nighthawks in its 49-12 win, and Currituck County lost its away playoff game at Newport, against Croatan by a score of 24-21.