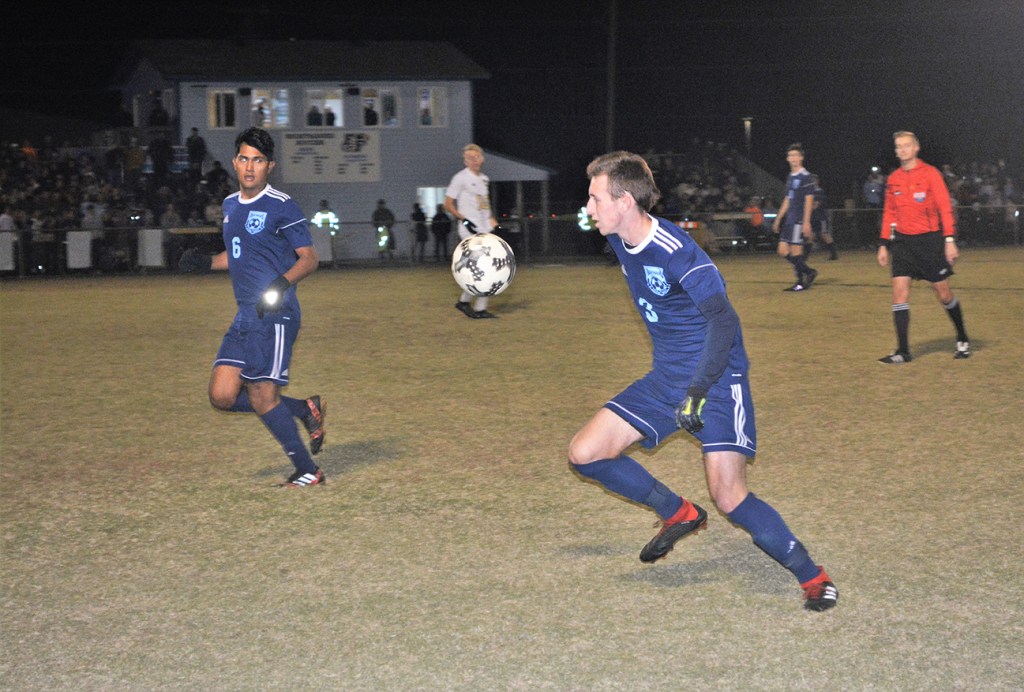 First Flight senior Lawson Eldridge, center, pushes the ball up field with hopes of scoring a goal late in the Nighthawks’ heartbreaking shootout loss to visiting Clinton Tuesday night in Kill Devil Hills. The two teams were scoreless after regulation play and four overtime periods, all of which totaled 110 minutes. The game came down to a shootout and First Flight lost 6-5 meaning Clinton claimed the Eastern Regional title and were set to head to Raleigh to face Salisbury for the state 2A championship Saturday. Daryl Law photo

First Flight’s men’s soccer team was one kick away from heading to Raleigh for the state 2A championship match that was scheduled for Saturday, Nov. 17. It would have been their third year straight – in 2016, they won it all. But this year’s push fell short by a mere penalty kick in a tense shootout after the Nighthawks and visiting Clinton Dark Horses were knotted at 0-0 after 80 minutes of regulation play and another 30 played in four overtime periods.

Simply put, it was a battle played by men sporting Mohawks who were pushing and scrapping for every ball. First Flight coach Juan Ramirez still had a raspy voice from yelling at his troops two days after the 6-5 shoot loss on Nov. 14. 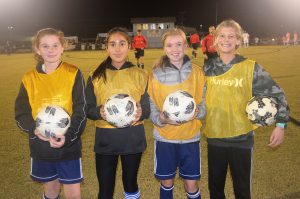 That night, in tight huddles before play would begin, the coach would get them pumped by yelling as loud as he could: “Eat them up!” And that was followed by the team: “Spit them out!”

From the sidelines, you could tell everyone was looking to win.

“It was a tough war, we had our chances,” he said, “not to take anything away from the other team.”

Clinton, with a record of 25-1, was scheduled to face winner of the Western Region Salisbury, 24-2-1, at Dail Soccer Field on the campus of N.C. State University on Saturday at 11 a.m. 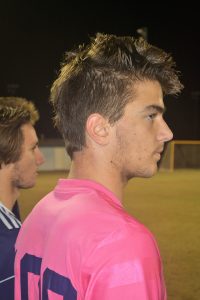 After being edged out Tuesday night, the ’Hawks hung their heads, but coach Ramirez and assistant Joel Mount told their guys to stay proud and keep their heads up.

“We told them that they had nothing to be ashamed about – they did a phenomenal job throughout the season,” Ramirez said.

He said the guys built character and learned about sportsmanship on their journey through the regular season and playoffs. It’s hard work and it takes dedication. 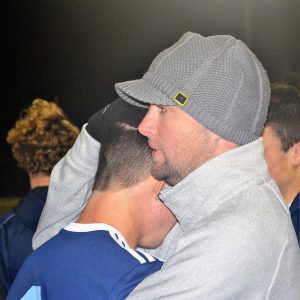 Assistant coach Joel Mount consoles one of the guys after the loss to Clinton in the Eastern Championship game last Tuesday. Daryl Law photo

“They worked hard to get to Raleigh – we were one PK [penalty kick] short,” Ramirez said. “It’s tough to lose that way.” In these PK shootouts, players fire off shots at point blank range, making it tough for the goalie from each team to stop the ball.

The crowd that attended the final match for the Eastern Championship was huge. It filled the stands and the masses wrapped around the fence on the south side of the soccer field. At times, it sprinkled rain, but fortunately it didn’t impact the play too much.

There were signs touting “No Goal Patrol” and more. First Flight junior keeper Lucas Neiderlander did an excellent job protecting the goal all night long. 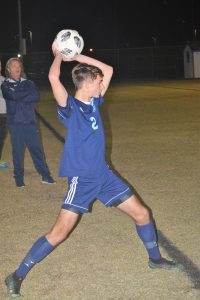 “He only gave up two goals throughout the entire playoffs,” the coach said.

On the field, the Nighthawks and Dark Horses clashed like warriors. For First Flight, the loss was season ending and eight of their seniors played the final high school match, Ramirez noted.

Overall, however, he was proud of their year.

“It was a great run and it was fun,” he added. “It was everything you want as a coach – we were just one kick short of making it to the championship again.”

From here, the coach said they’ll regroup and get ready for yet another year where they’ll look to “eat them up and spit them out.”

Franklin Academy bests Manteo in third round of soccer playoffs