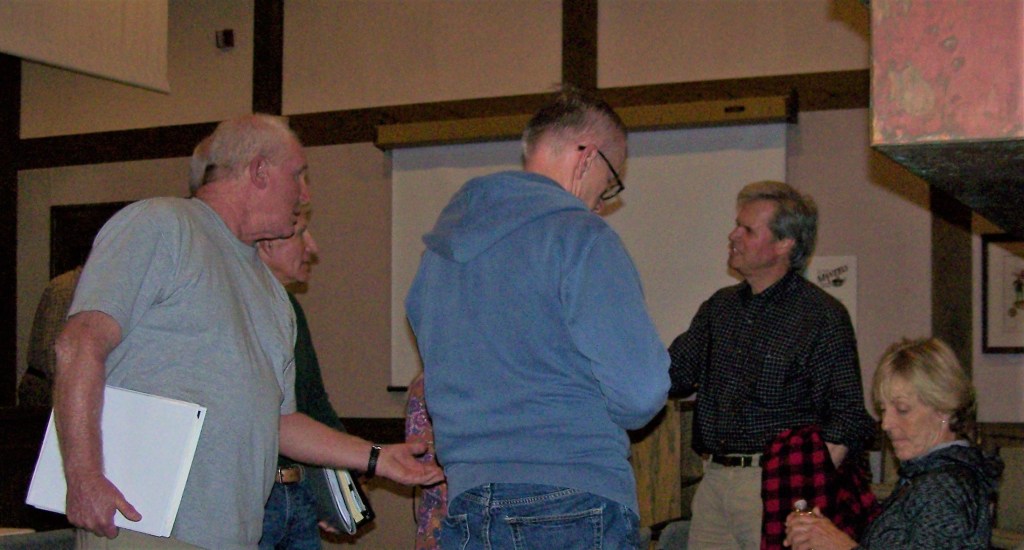 After a recent meeting, Manteo Planning Board members Lee Tugwell (left) and Billy Parker linger and debate their different visions of how to best move the town’s planning process forward. The joint meeting between the town’s commissioners and Planning Board ended abruptly after the latter’s members exchanged pointed remarks over how to review the town’s zoning ordinance. Gregory Clark photo

As a meeting between Manteo’s Board of Commissioners and Planning Board was winding down, it turned contentious. It wasn’t tension between the two boards – who have often been at odds – but infighting between planning board members that caused the mood change.

Until tempers flared, the meeting had seen commissioners, members of the Planning Board and the public exchanging ideas over the direction of town in mostly informal conversation. The need to keep the small town charm of Manteo was a common theme. At the same time, a need for change and growth was recognized.

Although Mayor Bobby Owens made a point of emphasizing inclusiveness, indicating new or life-long residents had an equal voice. Owens said, “we need a goal, we need a plan, we need to be together.” It would soon become apparent achieving a single-minded direction would be difficult.

Lee Tugwell, a former mayor and current Planning Board member, pushed for an independent legal review of the zoning ordinance. He said the existing ordinance in many cases hindered growth, was obsolete and unenforceable.  Hal Goodman, Planning Board chairman, added that with recent legislative changes, it has been recommended zoning rules be reviewed to head off possible legal challenges.

Others, including another Planning Board member, Bill Parker, thought the logical first step was to revisit the town’s land use and development plan before undertaking a complete ordinance review. Parker said the zoning ordinance was an outgrowth of planning meetings with townspeople. “The way to redo zoning ordinances is to start out with the planning process of town input,” Parker added, “let the ordinances grow out from that.”

As the meeting was coming to an end, the mayor told the Planning Board chairman it was incumbent on his group [the Planning Board] to get started and come up with a plan and down the road the town would undertake a review.

For Tugwell, the road appeared to have already come to the end. As his chairman was agreeing to undertake the mayor’s request, Tugwell made a motion to recommend the commissioners authorize the town planner to begin the process of seeking a firm to undertake a full review of the zoning ordinance. On a split vote, the motion passed, but not before a heated debate between Planning Board members broke out. That prompted the mayor to gavel the meeting to a close saying, “we aren’t going to sit here and argue.”

The meeting ended, but not the debate. Tugwell and Parker lingered after the meeting exchanging their differing points of view with comments from other Planning Board members and the public added in. The harmonious atmosphere of the earlier part of the meeting had been shattered.

The path forward now falls on the Manteo Board of Commissioners. The governing body is expected to discuss the Planning Board’s recommendation for a legal review of the zoning ordinance at their December meeting.