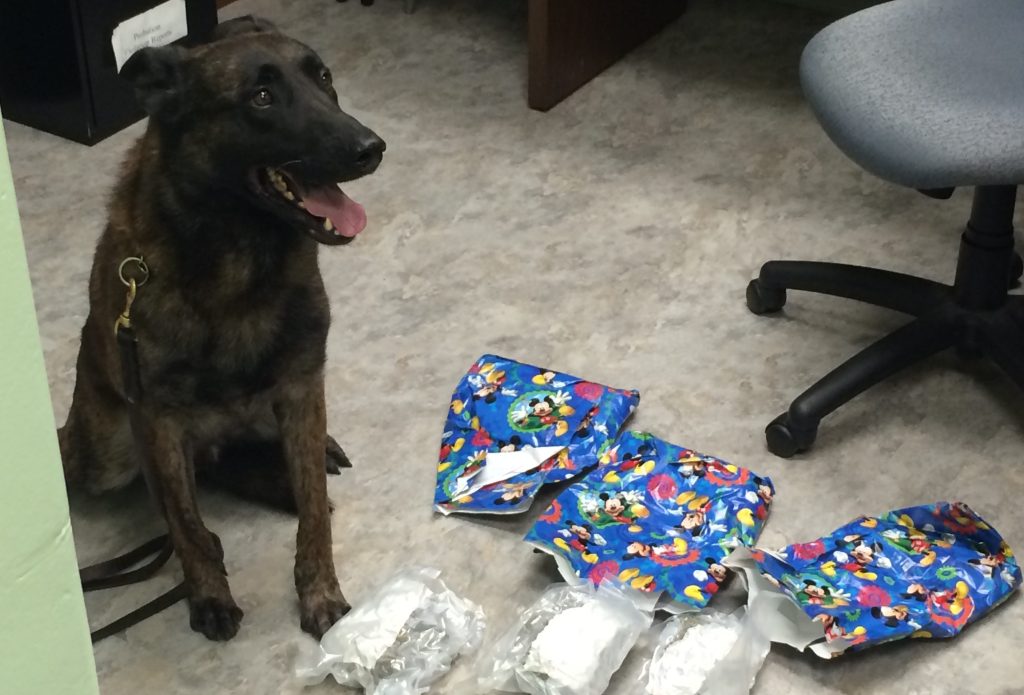 The combination of speed, agility and an almost unbelievable sense of smell make canines a great police partner.

In the late 1980s, Dare County Sheriff’s Deputy Tony Duvall, now retired, had the first certified police dog in the county, although fellow deputy Bob Eck also had a dog he trained himself.

Today, while not every Dare County agency has a dog, there are plenty to go around with one in Manteo, one in Kill Devil Hills, one with a local North Carolina State Bureau of Investigation agent, two in Nags Head and five canines with the Dare County Sheriff’s Office, which is also the largest law enforcement agency in the county.

Not all local agencies currently have dogs, although Kitty Hawk has had dogs as did Duck. Southern Shores Police Chief David M. Kole said he would like to, but it’s not in the cards right now.

“It would be nice to have one,” said Kole. “I think I could get one for next to nothing, but there’s no interest here. You’ve got to have the right person, one who wants to be a dog handler.”

Pulling regular shifts along with their human partners, sometimes called K-9 officers or K-9 handlers, area police dogs are trained to locate drugs, sniff out bombs, find corpses and, in some cases, take down suspects that try fight with or run from police.

With price tags to purchase, train, feed and care for the four legged members of the force, law enforcement officials are quick to point out that their canines are not just a luxury.

“Use them all the time,” said Dare County Sheriff Doug Doughtie. “They work a regular shift, mostly at night, and it would be safe to say our taxpayers are getting a fair return on their investment.”

When asked to compare the money spent on a dog versus hiring another officer, Doughtie said it all depends on the officer.

“Sometimes the money for a dog is better than for a person,” said Doughtie. “We’ve hired some people from outside the area and after being trained, they decide they want to go back where they came from. Dogs are easy to maintain and I don’t have to provide uniforms. It just cost to feed and care for them.”

Godfrey then added that dogs like his partner – a yellow lab named Bono brought in from the Czech Republic – will use the wind to their advantage.

“A dog can smell odors in packages that humans cannot,” added Godfrey.

In another analogy to vision by James Walker, former director of the Sensory Research Institute at Florida State University, what a human can see at a third of a mile, a dog could see more than 3,000 miles away and still see as well.

Their sense of smell makes dogs great partners for detection work. One reason the smell better is that dogs have 225 million scent receptors in their noses compared to only five million in a human nose.

In addition to that, Michael T. Nappier, DVM, DABVP, of the Virginia Maryland College of Veterinary Medicine, has said dogs have a second olfactory capability that humans do not because they have an organ, the vomeronasal organ, that we don’t have. The vomeronasal organ helps canines detect pheromones, chemicals released by animals that affect other members of the same species. This organ plays an important role in reproduction and other aspects of canine physiology and behavior.

There has even been research that indicates dogs can also detect fear, anxiety and even sadness. While the fight-or-flight hormone, adrenaline, is undetectable to humans apparently dogs can detect it.

Detection is just one of many skills a dog has.

Those same skills come in handy for search and rescue.

“With Boscoe, we have the ability to track lost kids,” said Moore. “We can also track elderly people with dementia.”

Moore went on to say another focus is as community relations tool: they have visited all schools, public library and various civic groups.

“We don’t have an apprehension dog,” Moore continued. “We’re looking at community involvement and getting drugs off the street.”

Moore pointed out that not all dogs are trained for apprehension. That’s when police dogs are trained to bite dangerous suspects and hold them hostage. That’s because in many situations, dogs can be the first ones to put their lives on the line and go in against an armed suspect to protect their human partners. However, above all else they must be stable dogs, with the ability to know when someone is a threat and to act solely on the command of their handlers.

“Most vendors get dogs from Europe” said Nags Head Police Officer Matt Huntingford. “They breed dogs over there for this particular purpose. They don’t breed shepherds or Malinois to be pets.”

Because they are known for their incredible working ability and desire to cooperate with their handlers, the most popular choices to be trained as police dogs include Belgian Malinois, German shepherds, bloodhounds, Dutch shepherds and Labrador retrievers.

Included in that purchase price is the intense training that takes several weeks depending on the officer’s previous dog handling experience. Much of a K-9 officer’s training centers around learning their dog’s abilities, identifying the commands used to cue a dog and discovering how to most effectively work as a team. Food, medical and other related expenses are included in each agency’s budget.

But the training doesn’t stop there. In addition to weekly training sessions, there is an annual check on their abilities.

“North Carolina does not require certification,” said Sergeant Shaun Barrera with the Dare County Sheriff’s Office. “But it is a pretty good thing to do.”

“Our dogs work just as hard as we do,” added Barrera. “Sometimes a little harder. Their job is not easy.”