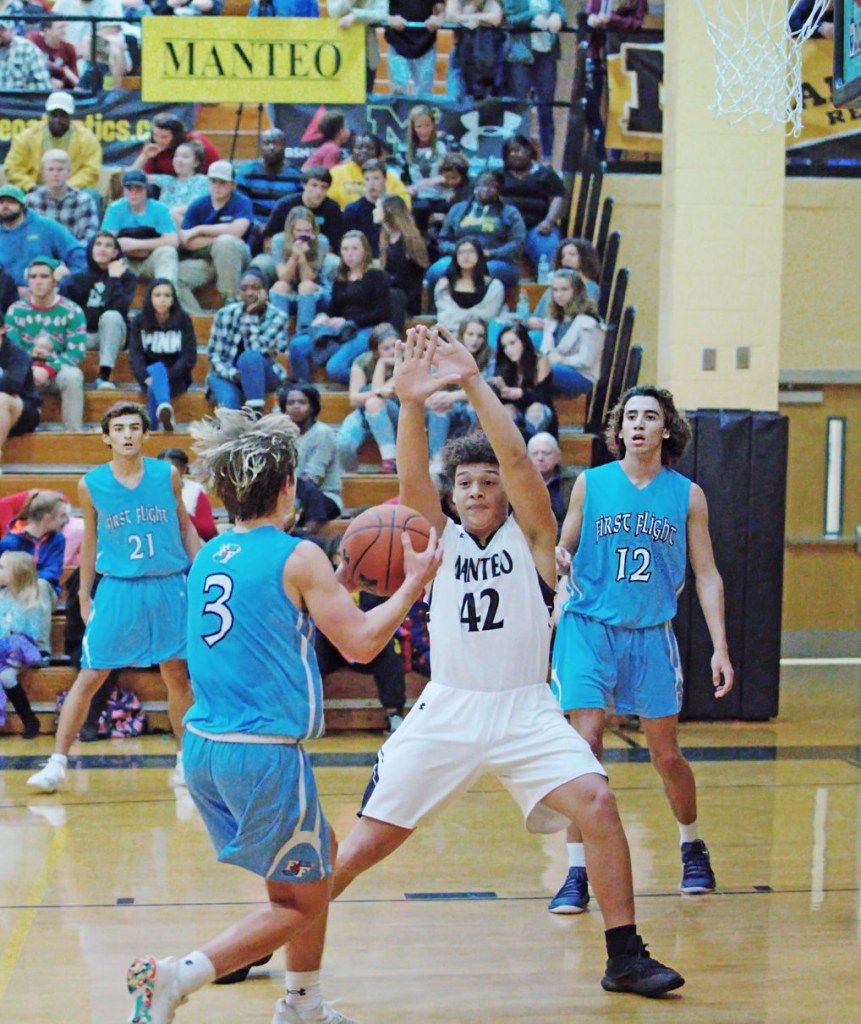 First Flight’s fast paced game and three point shooting proved too much for the Manteo Redskins. The outcome of the rivalry non-conference basketball game, played Friday night at Manteo High School in front of a large crowd, was never in doubt. The Nighthawks led from tip-off to buzzer.

Manteo coach Tim Charity knew the key to the Redskins game would be their ability to defend and stop First Flight’s outside shooters. “They are a really good three point shooting team,” added Charity. It became apparent early Manteo could neither stop or match the Nighthawks’ long-range shots.

Nighthawk Senior guard Reese Jones would open the scoring with a long jump shot, the first of his team leading four three pointers from outside the arc. Manteo would at first counter with an inside game. The Redskins using a ball control offense would drive the basket. For Manteo, the penetration was there but the finish wasn’t.

By the time the first quarter ended, the Nighthawks had a 12 point lead and it felt like the game was over. Manteo abandoned their inside drives in an attempt to run with the First Flight game. But Manteo shooters were stone cold and First Flight controlled the boards, limiting the Redskins for the most part to one shot.

Manteo again would turn to attacking Nighthawks defenders in the paint with some success. When Manteo did score, First Flight would quickly push the ball up the court and answer. First Flight took a 19 point lead into the halftime and it felt like the only question left to be answered was the final score.

In the third quarter, First Flight mixed up defenses and employed a full court press at times. Manteo made some nice plays at times. Kalihl Williams, with his back to the hoop, scored on an over the shoulder layup. For Manteo, it was individual plays, mostly from senior guard Blaise Bozarth; as a team the Redskins never could get going.

One constant in the game was the First Flight never stopped running or gunning. Their coach, Chad Williams, said slowing down isn’t the Nighthawks’ style. The other constant was the team’s ability to hit shots from beyond the three point line. Seven players would score from long distance.

First Flight next faces a tough Pinecrest team on December 27. Manteo will meet Mattamuskeet on January 3. Manteo and First Flight will renew their cross county rivalry on January 11, when the Redskins cross the bridge to play the Nighthawks in Kill Devil Hills.