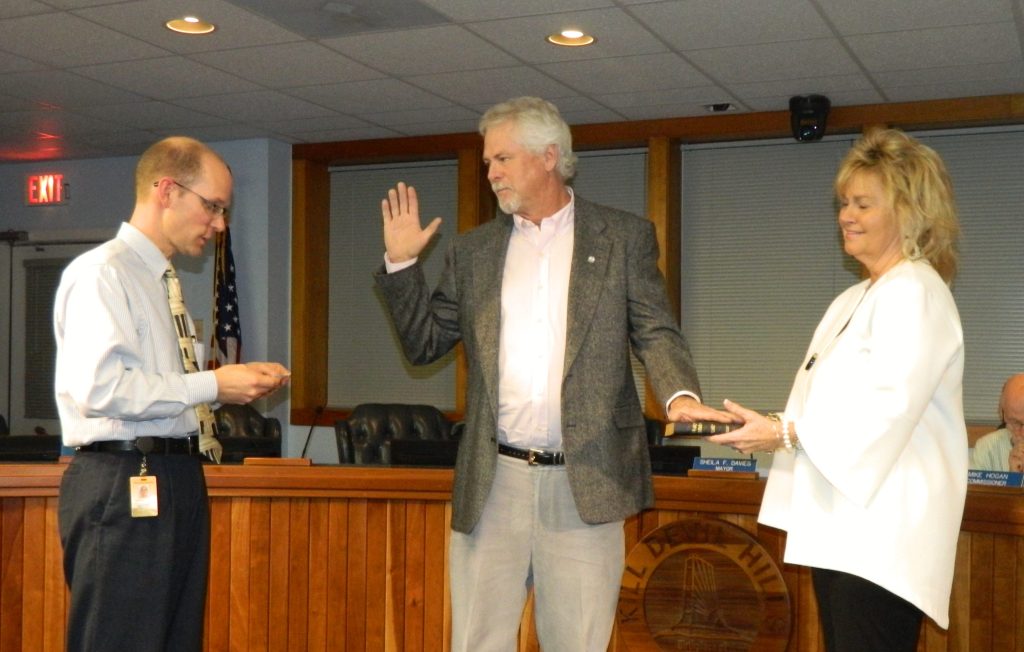 Nelson V. "Skip" Jones, center, was sworn into office as the newest member of the Kill Devil Hills Board of Commissioners during the board's regular session meeting January 14, replacing former commissioner Brandi Rheubottom, who resigned from the board near the end of 2018. His wife, Kaye B. Jones, holds a Bible while deputy town clerk Michael O'Dell administers the oath of office. Philip S. Ruckle Jr. photo

During the January 14 Board of Commissioners meeting, Kill Devil Hills commissioners established a new residential use for the town, approved a town-home site plan and finally filled a vacant seat on the board.

After a clarification on the terminology being used, a request by Eddie Goodrich to include cluster homes as a new permitted use in town was approved. During the introduction, it was pointed out that while the request referred to zero lot line development as a permitted use, the lot lines were under the structures within a given property line.

The code change allows more than one single family detached building between 500 and 2,500 square feet to be located on the same lot. Regular, traditional setbacks and other guidelines would still have to be met.

Moving on to new business items for the night, Jones was called back out of the audience and given the oath of office as the newest member of the Board of Commissioners. A former Planning Board and Community Appearance Commission member for the town, Jones was selected from a pool of candidates to replace former commissioner Brandi Rheubottom, who resigned near the end of 2018.

Later in the meeting, commissioners gave a unanimous stamp of approval for a proposed 11,875 square foot, seven unit multi-family dwelling with 20 parking spaces and other site improvements at 1206 West Boundary Street.

“We need this,” said commissioner John Windley just prior to the vote. “It will be good for the town.”

Also during the evening’s agenda, commissioners heard a request from Randy Appleton to remove his property at 2024 North Virginia Dare Trail from the Beach Nourishment Municipal Service District.

During discussion on the request, planning director Meredith Guns explained that Appleton has one of several lots where the former Clay Don Hotel sat. She said also that the lot is not condemnable, but there are restrictions attached to it and, like others nearby, is an oceanfront lot intersected by NC 12.

Other than a couple of comments by commissioners that all the lots in that area look to be the same size and that this situation appears to be an anomaly, there was little additional discussion leading up a unanimous vote to deny the request.

In other business for the night, commissioners also heard Teresa Osborne with the CPA firm Dowdy and Osborne present an overview of the town’s audit for the 2017-18 fiscal year. According to Osborne, Kill Devil Hills earned an unqualified opinion for its accounting practices, which is the best that can be issued and that the town ended the year in sound financial condition with a general fund balance of $9,642,000.

Following the audit report, finance director Beverly Kissinger announced that the town had received a Certificate of Achievement for Excellence in Financial Reporting from the Government Finance Officers Association for the fiscal year ending June 30, 2017. According to Kissinger, it is the 30th consecutive year Kill Devil Hills has received the national award.

During the close of regular business, commissioners approved a consent agenda with minutes for the December 10 meeting, a November 2018 monthly report, a budget amendment recording a US Department of Homeland Security firefighters grant for physical fitness equipment, an annual certification of firefighters and a motion to reschedule a request to allow seven-foot high chain link fences on unimproved property in the Light Industrial One Zone for the February 20 meeting.

Commissioners ended the meeting with a one hour general budget work session that included discussing without taking action a potential need to raise taxes in order to fund several new staff positions.

Clifton A. “Sonny” Duke retires from CHEC board

The Nature Corner: The story of Ole and Hanne