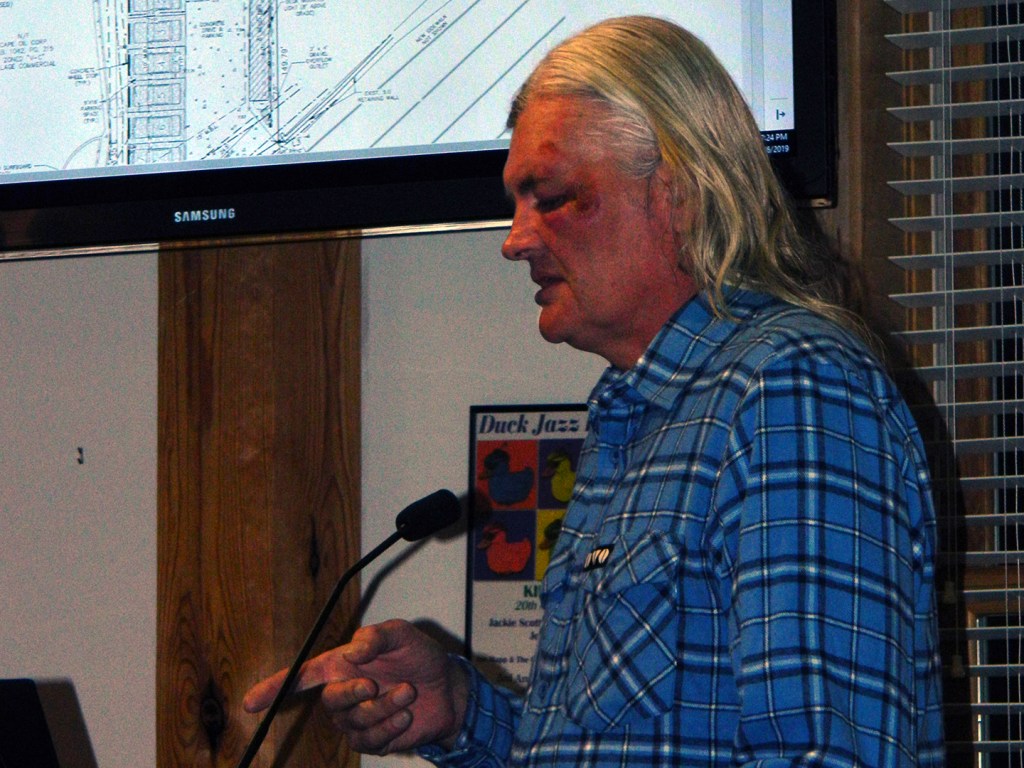 Robert Hovey, owner of Duck Village Outfitters, was at the February 6 Duck Town Council meeting with a request to convert a small area of retail space into a frozen yogurt dining area. After a brief discussion, the application was given unanimous approval. Philip S. Ruckle Jr. photo

Duck Town Council needed only a brief review of details last Wednesday to approve plans to add a small dining area to an existing retail business.

According to Duck Community Development director Joe Heard, Duck Village Outfitters owners Robert and Tanya Hovey were requesting to convert 134 square feet of existing retail space within their store at 1207 Duck Road for use as a frozen yogurt/smoothie parlor with seating for three people with 275 square foot of the site’s outdoor area to be used as an outdoor dining area.

The site is positioned to the north of the Kellogg Supply property and PNC Bank and sits across the street from Nags Head Hammocks and Duck Town Park. According to Heard, Duck Village Outfitters was granted relief from setback and lot coverage guidelines under the Village Commercial Development Option in 2006 and those requirements are not part of the review.

Current expansion plans include a bar-like countertop inside the northwest corner of the 1,552 square foot building with just enough seating to accommodate three stools. Dining will be an accessory use to the store’s retail operation. The outside seating area will be a ground level wood deck on the north side of the building over an existing gravel infiltration basin.

Heard went on to say the changes do not trigger any additional parking requirements nor additional outdoor lighting changes, although the Dare County Health Department will require a grease trap be installed within the existing septic system.

The only question about project was from Mayor Don Kingston who asked what happens with waste management currently shared with PNC Bank now that the bank is closing.

During his brief appearance at the podium, Hovey explained that the trash there is minimal and that they roll a cart out that gets picked up on a regular basis.

He added also that he is already in the Health Department permitting process and was told there was enough room for up to six seats but he does not want to convert that much retail space.

During council’s vote to approve the request Mayor Pro Tempore Monica Thibodeau commented that it appears to be a nice fit for the community.

The vote to approve included conditions that all fire, building code and Health Department requirements be met with any new signage and exterior lighting be reviewed and approved under separate permits. The conditional use permit expires in 12 months if the approved changes have not been initiated.

Other business during the February 6 meeting included approving minor Zoning Ordinance changes to for single-family residences, eliminating references to occupancy and adding references to building size and septic capacity consistent with other recent changes.

In another housekeeping measure, council voted to make it unlawful to use a bow, crossbow or any similar device, that shoots or discharges any arrow or similar projectile of deadly force within the town’s corporate limits. An exemption for archery practice on private property was included. There was, however, additional language added to clarify that the discharge of guns, shotguns, rifles, pistols or any other firearm or air rifles, spring guns, spring pistols, compressed air rifles, compressed air pistols or similar devices is also prohibited within the corporate limits of the town.

There was also a presentation of the 2018 audit report by Lisa Murphy, with the accounting firm of Johnson, Mizelle, Straub and Murphy, who advised that the received an unmodified opinion, which the best rating available, and that the documents reviewed appear to be an accurate account of the financial transactions and position for the Town of Duck.

Share the Valentine’s Day love with these shelter pets