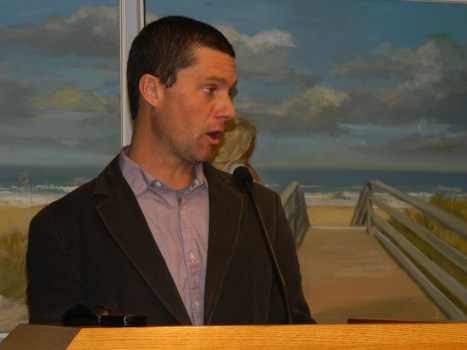 Brian Rubino with Quible and Associates was at the February 6 Nags Head Board of Commissioners meeting requesting a code change on behalf of Miller’s Waterfront Restaurant and Tale of the Whale Restaurant that would allow up to eight boats to dock at each of the two Nags Head restaurants. The request was given a green light, but for only up to four boats. Philip S. Ruckle Jr. photo 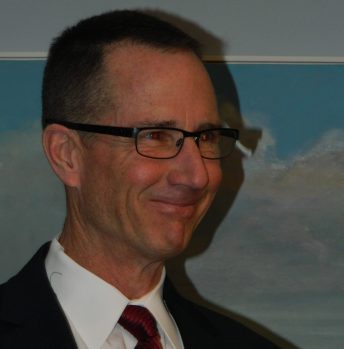 Phillip Webster was introduced at the February 6 Nags Head Board of Commissioners meeting as the new Nags Head Police Chief. Webster retired in June 2017 as police chief of the North Myrtle Beach Police Department. A public meet and greet with Chief Webster is scheduled for Wednesday, February 13, from 3:30 to 5:30 p.m. at Waveriders Coffee and Deli, 3022 South Croatan Highway. Philip S. Ruckle Jr. photo 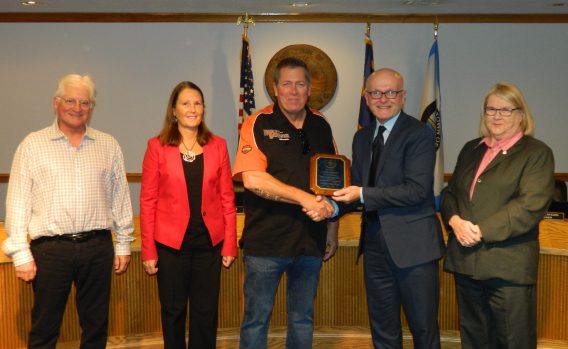 Nags Head Fire Captain John Harris, center, was congratulated at the February 6 Nags Head Board of Commissioners meeting on his recent retirement from the town's fire department after 21 years of service. With Harris are, from left, commissioner Webb Fuller, Mayor Pro Tem Susie Walters, Mayor Ben Cahoon and commissioner Renée Cahoon. Not pictured is commissioner Michael Siers, who was unable to attend the meeting. Philip S. Ruckle Jr. photo 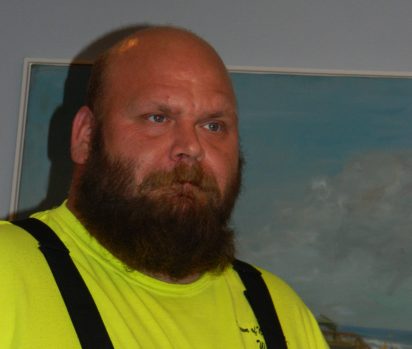 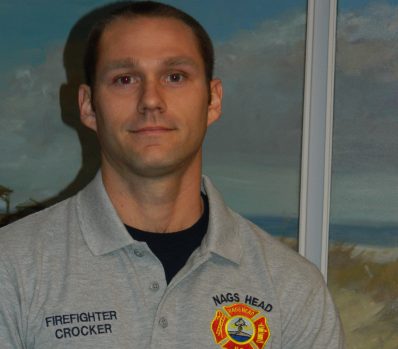 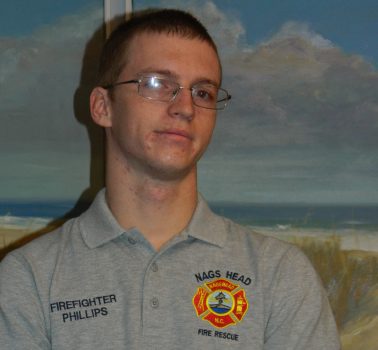 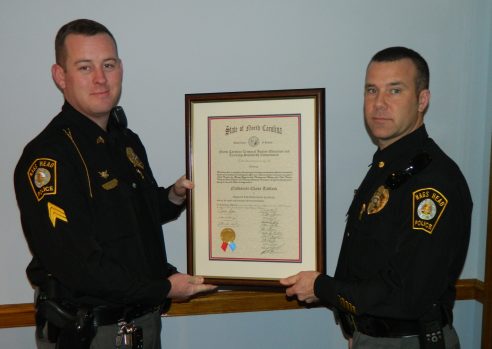 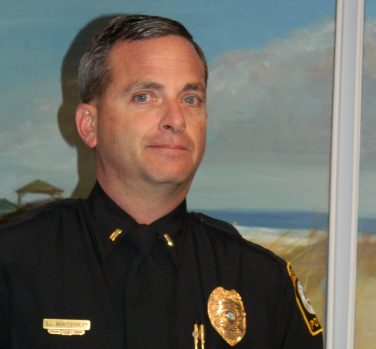 Nags Head Police Lieutenant Chris Montgomery was recognized during the February 6 Nags Head Board of Commissioners meeting for completing 20 years of service with the town. Philip S. Ruckle Jr. photo

Nags Head commissioners on February 6 announced the selection of a new police chief, voted to allow boats to dock at a restaurant, prohibited parking on the west side of an area along South Virginia Dare Trail, designated that all town beach and sound public accesses be no parking areas from midnight to 6 a.m., authorized a multi-year town fireworks contract and passed a resolution in support of naming Bonner Bridge replacement bridge after former Senator Marc Basnight.

After a January pause to verify compatibility with the town’s Land Use Plan, a request to allow boats to dock at restaurants in the C-2, General Commercial and Commercial-Outdoor Recreational Overlay Zoning Districts was given a stamp of approval.

The request from Brian Rubino with Quible and Associates, on behalf of Miller’s Waterfront Restaurant and Tale of the Whale Restaurant, hit rough waters in January when commissioners, while not entirely convinced a code change was necessary, voiced concerns about several unanswered questions. Among them was how to maintain the protection of area marshes and safety of recreational users out in the sound. The discussion came to an end when commissioners asked for confirmation that the request is in line with the town’s Land Use plan.

At the end of January, town attorney John D. Leidy issued a memo with an opinion that when certain conditions are met the proposed request would be consistent with the town’s Land Use Plan.

That opened the door for a continued review at the February 6 Board of Commissioners meeting where deputy town manager Andy Garman led a discussion that included existing town and CAMA guidelines.

According to Garman private docks as an accessory to a principal use are already permitted in the C-2 District, which is the underlying district in this area and that the requested slips could be used by restaurant patrons who own boats.

In order to allow slips to be utilized by restaurant patrons who own boats, town officials needed to set guidelines for transient boat slip docking facilities at piers without any commercial marina services such as permanent docking facilities, dry (boat) storage, haul-out facilities and repair services.

As written the new use applies to restaurant sites only which is estimated to limit the number of potential location from about 14 to five.

After a brief look at the various no wake zones in the sound, commissioners established an area-wide no wake zone out 600 feet from the edge of the property to provide a consistent guideline for the water sports businesses already in place.

In another move toward consistency, a request to make all beach and sound public accesses in town no parking/tow away zones from midnight until 6 a.m. was approved.

According to town manager Cliff Ogburn, there were several different times posted at a number of different public accesses, making is difficult for the public and police to keep track of the proper times involved. He went on to explain that with only two tickets issued in 2018 and six in 2017, it was not a revenue issue.

When it was pointed out that Network for Endangered Sea Turtles volunteers often need to be out during those times, the consensus was that volunteers should have placards and if any violations were issued they could be worked out.

A similar, unrelated request to make from 7200 to 7218 of South Virginia Dare Trail a no parking/tow away zone was also approved. During that discussion, it was pointed out that cars parked in the area near Fat Boyz often create a safety hazard for pedestrians and vehicles accessing the Beach Road from properties there. Prohibiting parking there is expected to open of a better sight line for everyone.

In preparation for the annual Independence Day fireworks display, a three-year contract with Zambelli Fireworks Company was approved, locking in the price of $25,000 each year. Commissioner Renée Cahoon suggested a cooperative display with other towns and Mayor Ben Cahoon said he would talk with other mayors to see if there is any interest.

Other business for the day included:
• approving an Ocean Rescue Lifeguard Apprenticeship Program to allow residents in Dare and Currituck County as young as 16 to be hired and trained.
• a presentation by College of the Albemarle Dean Tim Sweeney on educational programs available.
• a Jennette’s Pier update report by pier director Mike Remige covering the past two years.
• reappointed Margaret Suppler to the Board of Adjustment for a three-year term.
• authorized an application to purchase a 98-inch display for the boardroom through a Gov-Ed Local Programming Development Initiative Grant.
• authorized letter be sent to NC Insurance Commissioner Mike Causey in opposition to a proposed increase for homeowner insurance rates.
• adopted a resolution in support of naming the new Oregon Inlet replacement bridge after former Senator Marc Basnight.
• a series of recognitions that included the introduction of new Police Chief Phillip Webster, who replaces Kevin Brinkley who retired, new Water Distribution employee Ray Scott, new firefighter/EMT Guy Crocker and new firefighter/EMT James Phillips.
• Police Sgt. Chase Tadlock was recognized for earning an Advanced Law Enforcement Training and Standards Certification.
• Police Lt. Chris Montgomery was recognized for 20 years of service to the town.
• Fire Captain John Harris was recognized and congratulated on his recent retirement.

Share the Valentine’s Day love with these shelter pets