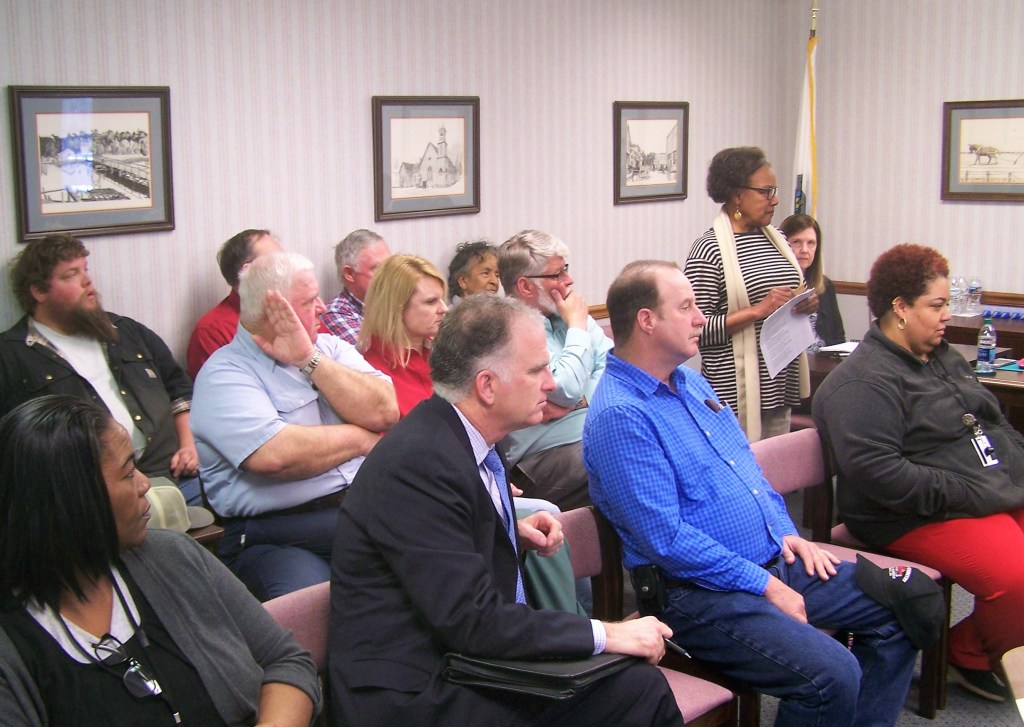 The Confederate soldier monument ought to be removed from the courthouse lawn, Joyce Sykes Fitch, a Ludford Road resident, told the Tyrrell County commissioners earlier this month.

Speaking in the presence of a full meeting room during the public comment period at the opening of the board’s regular session, Fitch acknowledged that the cast metal figure atop the inscribed base “is an important statue,” but she did not know the identity of the Confederate soldier. “Why is it still standing at the courthouse in 2019?”

Chairman Tommy Everett briefly traced the monument’s history: purchased with private donations, erected (in 1902) on private property, moved to the courthouse lawn when Broad Street was widened (about 1927).

“This county was split drastically, North and South,” Everett commented. Brother fought against brother and “I personally think it is a marker of a mistake” and a timeline of a division and reunification of the people.

“It bothers us,” Fitch replied, speaking for the Concerned Citizens of Tyrrell County.

Everett then related the familiar story that when a force of Union soldiers came to Columbia in 1862, an unnamed slave woman warned the searching soldiers against a “disease” as they approached the farmhouse where the county’s public records had been removed. Her deception likely saved the records, dating from 1729, from wanton destruction, he said, and he suggested there ought to be a monument to her.

Fitch had opened her comments by saying she did not see any of the commissioners, except Nina Griswell, at the Dr. Martin Luther King Day ceremonies at the courthouse and in VanHorne Auditorium on Jan. 21, an annual event sponsored by Concerned Citizens of Tyrrell County.

“The theme was about unity and I thought you guys were all about unity,” Fitch said. “Why weren’t you there? The program called for recognition of public officials.”

Everett, saying he spoke only for himself, replied that he was not invited.

“Don’t you read the newspaper?”

“Not always; and I would not consider that a specific invitation.”

Fitch then moved to the question of the Confederate monument.

Her final remark was that she and neighbors continue to wait for sewer service on the south side of Alligator Creek, which has been promised and is in the planning stage.