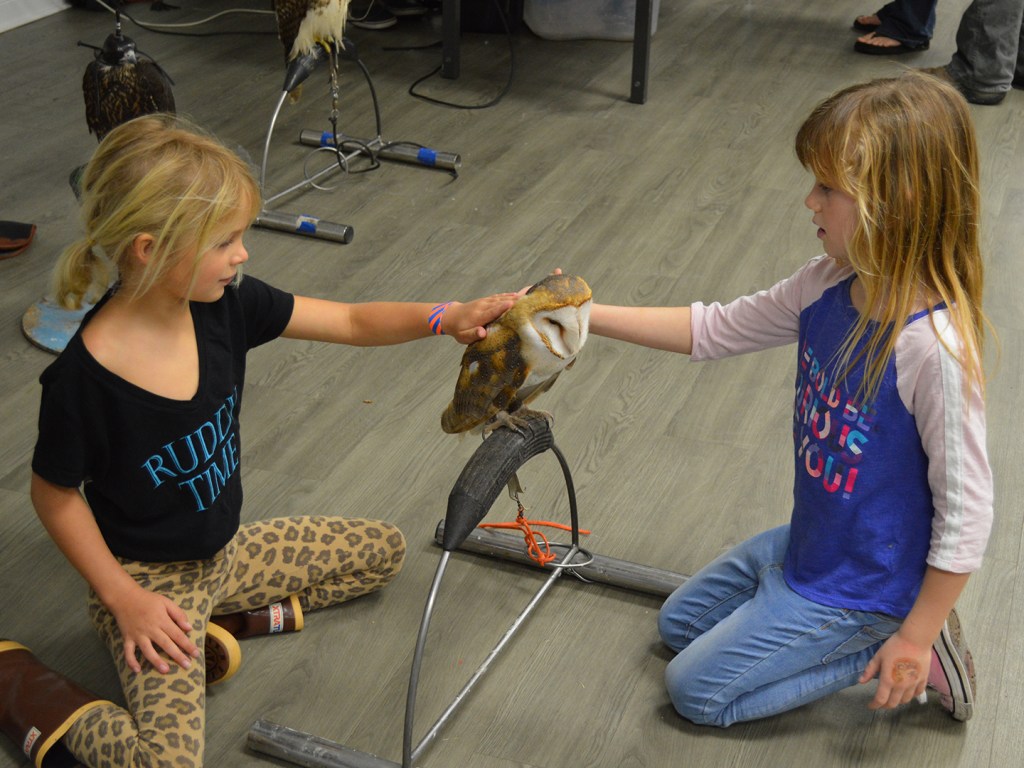 At the first Hatteras Village Waterfowl Festive, Stella Mae and Marin stroke a docile barn owl. The owl can hunt in complete darkness, turn her head 270 degrees and has asymmetrical ears to triangulate prey location. The owl was part of a demonstration by Hawk Manor Falconry, Lillington. Mary Helen Goodloe-Murphy photo

The festival was held Feb. 22 through 24 at various locations in the village. The Hatteras Village Civic Association organized the festival with association president Karla Jarvis leading the way.

The festival opened with a terrific “Fin, Feather and Bourbon” event on Friday night. Close to 100 folks gathered in the village’s civic center to feast on small plate offerings.

The food offerings were arranged on three tables around the room so people could easily access the food without lines.

On Saturday, the informative portion of the festival took off.

A winter bird walk was offered by the Hatteras Island Ocean Center. Two boat captains took participants on a total of five blind and bird tours. In the morning and afternoon, attendees had an opportunity to paint pintail ducks.

Danny Couch, a historian and storyteller with Hatteras Tours, shepherded 25 people on a historic Hatteras tour. In the afternoon, he delivered a talk on Hatteras village hunt clubs in the event tent.

The presentation area was filled with the 4 p.m. show by Chip Gentry, Sommer Gentry and their feathered friends from Hawk Manor Falconry, Lillington.

Falconry is the art of training and hunting with birds of prey. The Gentrys brought a kestrel, a red tail hawk and a beautiful, soft, docile barn owl that was the star of the show for young attendees.

The red-tail hawk is the most common bird of prey in North Carolina and important to the environmental balance, says Gentry.

This hawk has protective lens that slide across his eyes for protection. It hunts from the sky, 400 to 1,000 feet up. Its talons are extremely strong and lock and grab prey and not let go. It immediately bites the prey and instantly breaks the spinal cord, taught Gentry.

After the falconry demonstration, boys gathered for a duck and goose calling contest. It was loud and skilled. Winners were Wheeler Ballance, John Canning and John Fairbanks, in that order.

The day concluded with a southwestern-themed dinner and the festival wrapped up on Sunday with breakfast.