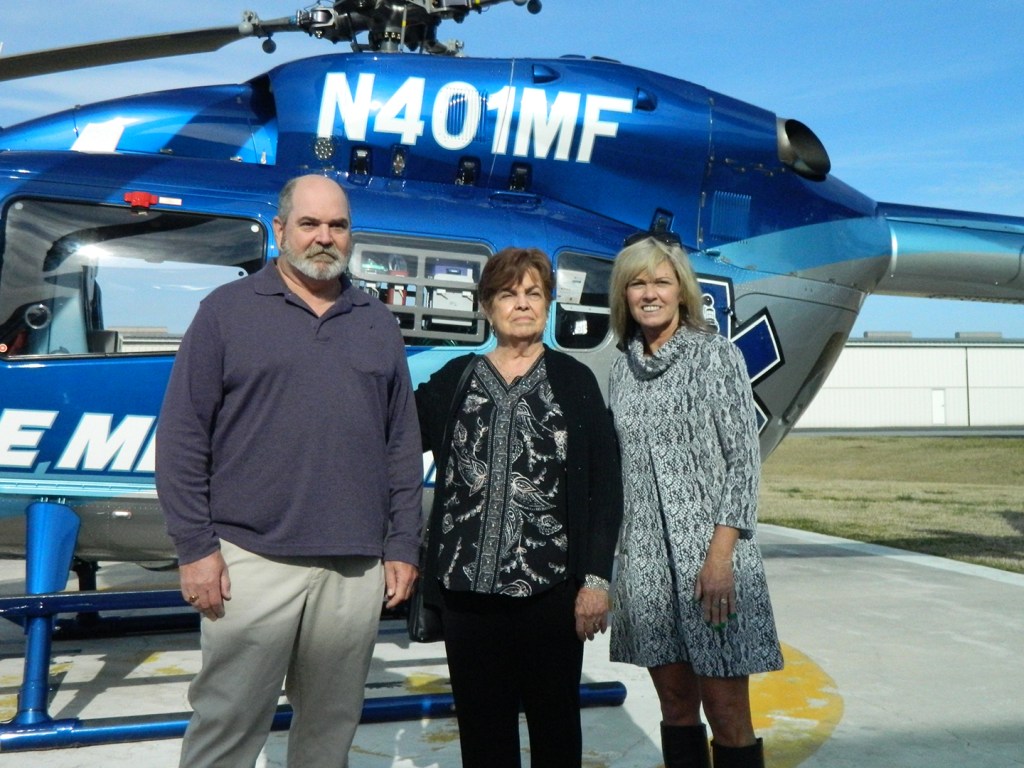 Family members on hand for the ceremony were, from left, son Tony Duvall, wife Suzanne Duvall and daughter Gina Twiford. The Willoughby family was not able to attend. Philip S. Ruckle Jr. photo

“Instead of being a sad time, we prefer to celebrate the lives of CC and Stephanie as we imagine they would want us to carry on,” said Dare County EMS Chief Jennie L. Collins. “It’s also a chance for the public to look at how we are using their tax dollars.”

It was after dark on March 26, 1989, while on the way back to Dare County after taking a patient to Sentara Norfolk General Hospital in Norfolk, Va., that C.C. Duvall, 53, the pilot, and Stephanie G. Willoughby, 34, a medical technician, were killed when their helicopter’s rotor system collided with a newly constructed, unlit cellular transmission tower at Coinjock.

A National Transportation Safety Board report said probable cause(s) of the accident was the completion of the top 100 foot section of the 240 foot tower near sunset without electrical power or beacon and that the supervisor failed to advise flight services of the tower height and that a beacon was not in operation.

“It is hard to imagine that this past Tuesday marked 30 years of the tragic loss of C.C. and Stephanie,” said Collins. “But the one thing that stays constant is that time marches on.”

Collins went on to say that both C.C. and Stephanie were dedicated, hardworking professionals that loved the work they did, loved their families and loved this community.

“The loss was tragic,” Collins continued. “It was tragic and life changing for their spouses, their children, their extended family, this department, the county government and the community. It was a dark time in our history.”

On hand for the ceremony were Suzanne Duvall, CC’s wife, and two children, Tony Duvall and Gina Twiford, who live and work in the area.

Collins said she spoke with Dave Willoughby, Stephanie’s husband, but neither Dave, who has remarried, nor Emily, their daughter who was two years old when Stephanie died, could attend the ceremony.

Collins explained also that while Dare County could have shut down the MedFlight program, officials recognized how valuable the service is to the citizens and visitors of the county and the vital role it plays in the delivery of emergency medical services.

“They recognized the work that C.C. and Stephanie did really mattered,” added Collins.

According to Collins, the county not only decided to keep the MedFlight program but to heavily invest in the program and restructure it. And, coupled with incredible advances in technology, equipment and training the entire medevac industry has been restructured during the past 30 years.

“We will always remember the sacrifices made and we will never forget C.C. and Stephanie,” said Collins.

Following the comments by Collins, a decal on the helicopter tail section was unveiled with the date of the crash and the names of C.C. Duvall and Stephanie G. Willoughby. 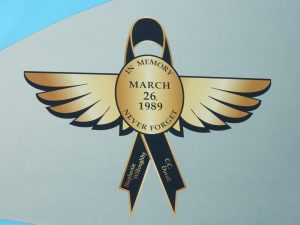 “It is a pleasure to be invited here on the 30th anniversary,” said Tony Duvall. “Our family greatly appreciates all the dedicated EMS personnel and their hard work and dedication, and to the rest of the county for all their support.”

Soon after, the area was then opened to the public for an annual open house to allow citizens a chance for a close-up view of the Dare County EMS MedFlight Airbus H-145 helicopter. 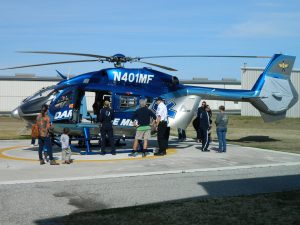