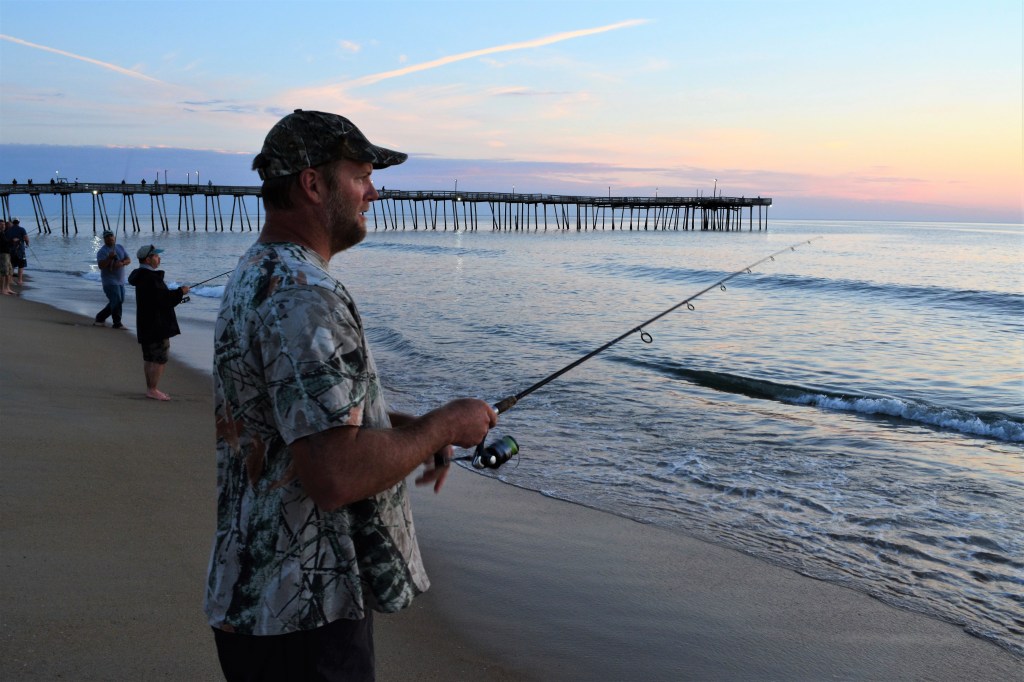 That’s the sound of big bluefish hitting the deck at the end of Jennette’s Pier while a handful of anglers using Got-Cha plugs reeled in nice-sized fish left and right Thursday afternoon.

In general, fishing has been good along the Outer Banks with plenty of blues, trout, sea mullet, puffers and even pinfish. The ocean continues to warm up thanks to some east winds so there was a lot of pretty water and large surf rolling in mid-week.

In addition, the first Spanish mackerel of the year and one small cobia were caught at Jennette’s in Nags Head. At the nearby “Little Bridge,” anglers have also had some luck picking a few trout and slot red drum here and there.

According to the T.W.’s fishing report, inshore anglers are “catching bluefish and the cobia bite is getting better every day.”

Their report features a photo of Britton Stewart of T.W.’s holding a beautiful, big-time speckled trout she caught in the surf. In the shot, she’s smiling ear-to-ear. 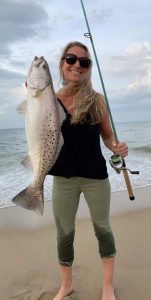 Britton Stewart holds up a giant speckled trout she landed while surf fishing recently. Her brother Justin jokes her about the catch online: “This is what happens when you give your sister your rod for 5 minutes to catch bluefish.” Courtesy T.W.’s

At Nags Head Pier, extensive repairs are complete and they’re open and ready for business, according to their Facebook page.

“The pier is open for the season,” they reported. “Her facelift is complete and she is ready for another great year!

“People are catching bluefish, trout, sea mullet and puppy drum,” they said “We have all your needs and wants to have a great day fishing! Stop in and see us soon!”

Avalon Pier in Kill Devil Hills was reporting blues and Spanish on plugs and bottom fishermen have found plenty of sea mullet.

Perhaps the biggest news of the week happened when the pier released two interesting whale videos on Facebook. The first one showed a whale super close to the wooden pilings of the structure but the next one was even more intense.

It featured another whale (or the same one), swimming in between the end pilings and then it thrashed around so violently the videographer scampered away from the action because it seemed as if the pier might sustain damage!

Early mornings at each pier continue to draw plenty of anglers and it’s a great time of year to wet and line so “sea” ya out there! 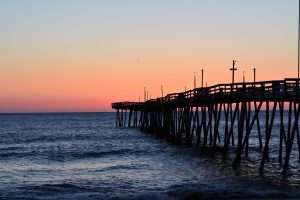 It’s just another beautiful morning at Avalon Pier in Kill Devil Hills. The pier posted several crazy videos of whales swimming next to and under the pier this week. Courtesy photo