Protecting North Carolina’s coast at top of agenda for mayors 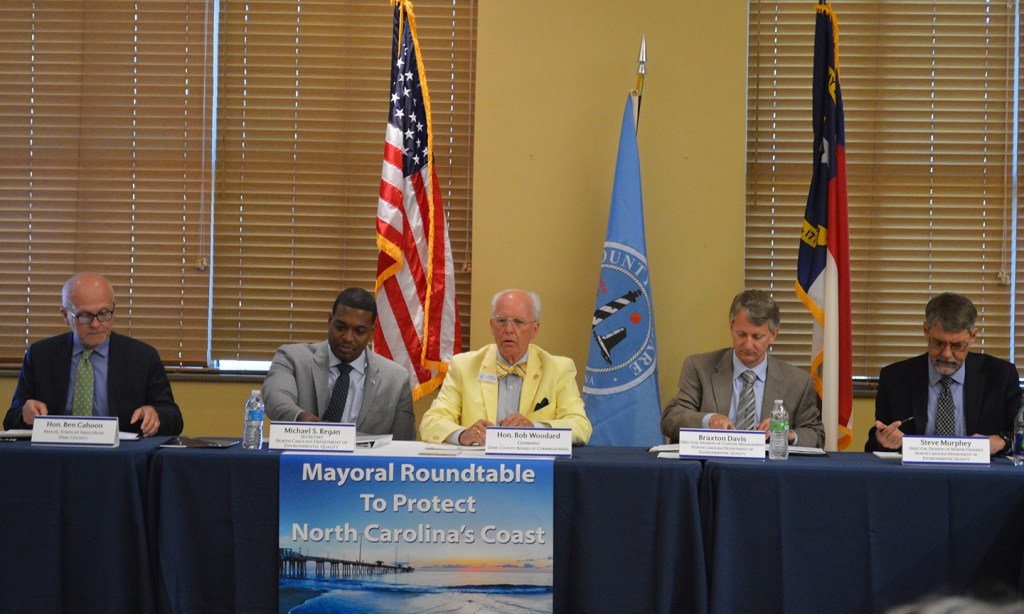 At the head table for the mayoral discussion about coastal protection from oil and gas drilling and seismic testing are, from left, Nags Head Mayor Ben Cahoon, Secretary of the North Carolina Department of Environmental Quality Michael S. Regan, Chairman of the Dare County Board of Commissioners Robert L. Woodard, Director of Division of Coastal Management Braxton Davis and Director of Marine Fisheries Steve Murphey. Mary Helen Goodloe-Murphy photo

At the end of a two-hour discussion, mayors of 11 coastal North Carolina towns signed a resolution saying that state and federal governments should permanently place state and federal waters “off-limits for oil or gas exploration, leasing and extraction.”

The mayors are serious about protecting their towns, economy and people from oil spills. They are willing to travel to take concerns to state legislators and U.S. senators.

Headlining the conversation was North Carolina Secretary of the Department of Environmental Quality Michael S. Regan.

“One spill and we’re history,” said Bob Woodard, chairman of the Dare County Board of Commissioners. “We would be devastated with one spill off our coast.”

Manteo Mayor Bobby Owens said “we can’t take a chance on it.”

John Davis, mayor of Swansboro, said “all of my investment is on that strand of sand.” He would be economically devastated with a spill. Driving his concern is saving his family-friendly town for his grandchildren and great-grandchildren.

Nags Head Mayor Ben Cahoon told a compelling story about what would happen one small business in his town. The Surfin’ Spoon was started by Jesse and Whitney Hines to sell frozen yogurt. They have two small children. They added staff and created t-shirts and hats and added ice cream sandwiches. Like Davis, the couple has poured all resources into the Surfin’ Spoon. That business and family would be devastated with an oil spill.

Regan said partnership and persistence are required. He said the Cooper administration’s message has not changed. The message “not off our coast” has been delivered to the President and the previous secretary of the U.S. Department of Interior. He is prepared to deliver the same message to David Bernhardt, now Secretary the Department of Interior.

The work ahead of the group was outlined. Reaching out to state legislators to turn the General Assembly to opposing off-shore exploration and drilling is a major step. Additionally, a united congressional delegation is required.

Regan said the messaging needs to concentrate on economy, heritage and culture. He said Florida, South Carolina and Georgia have done a much better job with messaging.

Ben Cahoon and Bob Woodard set up the mayors’ meeting with Regan and his staff. The local pair led the discussion.

The Draft Proposed Program for the Outer Continental Shelf Oil and Gas Leasing Program, 2019-2024, is temporarily on hold. The Bureau of Ocean Energy Management has reserved rooms for a possible hearing or open house for July 22, 2019.