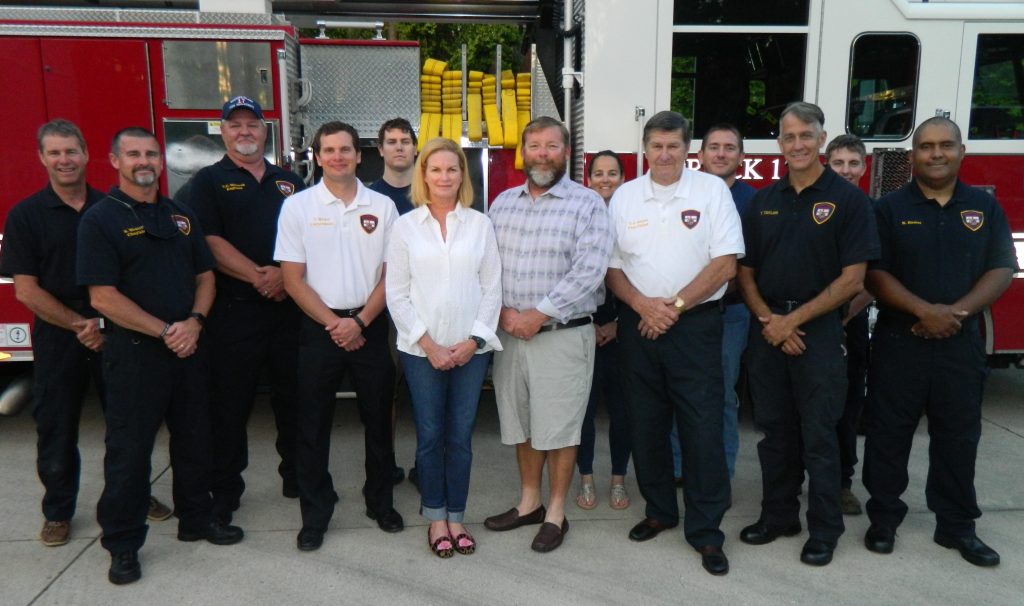 Charles “Fin” Gaddy still remembers the phone call about 10 years ago while fishing aboard his charter boat Qualifier.

Lightning had hit a gas line to his Mother Vineyard home and started a fire. The phone call was to tell him that the fire department had responded to put the fire out.

Concerned for the welfare of his wife and two young children who were at home, Gaddy made a hurried return trip back to Manteo.

Firefighters were able to control the blaze and put the fire out with minimal damage to the house before Gaddy made it back home. To show his appreciation for their efforts, Gaddy made a donation to the Roanoke Island Volunteer Fire Department from an endowment fund his parents established. Gaddy recently made a second donation to the fire department coupled with a visit to meet some of the firefighters there.

The visit gave Fire Chief Talmadge Jones a chance to explain how the department works along with a short tour of the station. 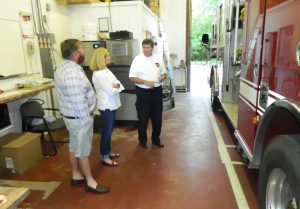 Following the tour, Gaddy said he found the tour interesting. He added also that after the initial fire, it had been a revelation that he knew several people in the department.

“When I got there I saw faces from the community that I recognized,” Gaddy said. “People like CC Mihovch, Kenny Pekrun and Ken Daniels. I didn’t know they were in the fire department. You deal with all these people and you see them but don’t realize that when there is trouble it’s your neighbor that is coming. A sense of community.”

While it not unusual for people to donate something following an event like the lightning strike fire, Gaddy has been able to help more than just the fire department from an endowment fund his parents set up through the North Carolina Community Foundation. Gaddy’s father was one of the foundation’s founders.

Gaddy cautioned, however, that the donation is not for the publicity, it was more for the help to the community.

It was not the only donation. Other endowment recipients include the Elizabethan Gardens, Dare County Hospice, the Manteo High School baseball scoreboard and other local charities.

And the Gaddy generosity is not limited to writing checks. He has also taken combat warriors and wounded veterans fishing on his charter boat.

“We don’t like to beat on the chest about the things we do,” Gaddy said. “We appreciate what the volunteers do.”

“We appreciate the generosity of the Gaddy family in making this grant to the Roanoke Island Volunteer Fire Department,” said Jones.

Protecting North Carolina’s coast at top of agenda for mayors