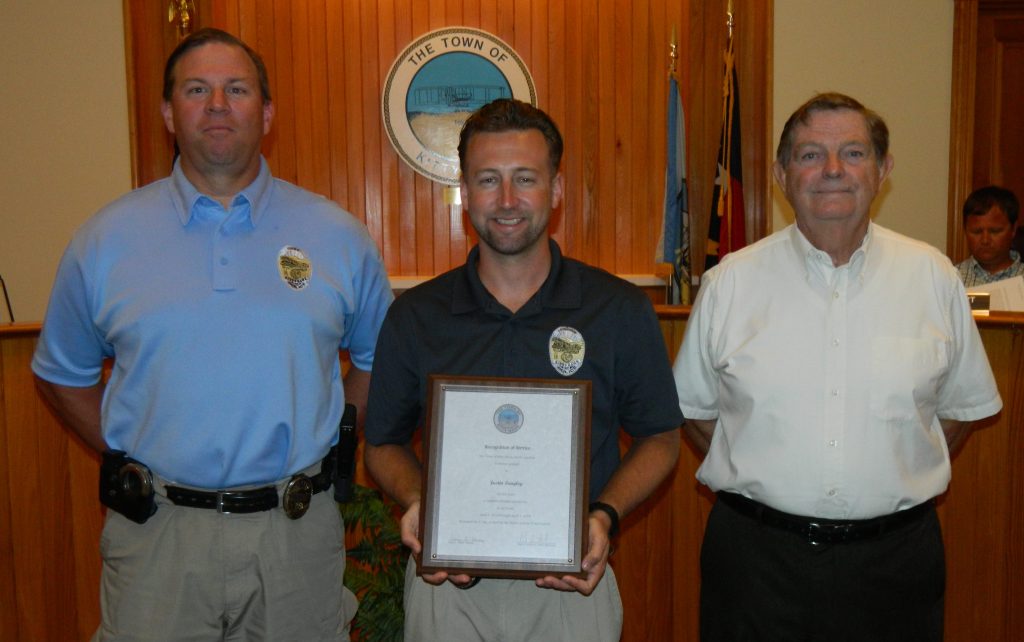 According to Stewart, the $10,152,437 budget reflects an increase in revenues from investments that helps make possible a strong focus on continued fiscal responsibility with an emphasis on future capital purchases and projects.

“This budget maintains the existing tax rate at .34 cents with .04 dedicated to beach nourishment,” explained Stewart. “There is an additional .12 cents in the municipal service district.”

Covering several budget highlights, Stewart said there is a two percent step increase for existing employees with no new employee positions planned for the year. At least $142,000 will go toward street resurfacing and $100,000 for bath house repairs.

Mayor Gary Perry commented that frequent flooding at the current police station makes it necessary to look at plans for a new one.

Other business for the evening included approving a site plan amendment for the urgent care facility at 5112 North Croatan Highway to replace eight to ten existing trash roll carts with a single commercial dumpster container.

The approved roll carts currently in place have experienced issues with wind blowing the cans open and blowing garbage out of the cans and off-site. A dumpster located toward the northeast corner of the lot takes into consideration concerns raised by adjacent property owners during the original site plan approval. As a result, the closest residence is more than 200 feet from the proposed dumpster pad, which will be emptied three times each week by Dare County Sanitation between 4:30 and 5 a.m.

The evening’s agenda also included a presentation to Detective Justin Langley in recognition of his five years of service with Kitty Hawk.

During the brief presentation announcement, Police Chief Joel C. Johnson said Langley had more than 12 years of experience and works at all hours of the day in the fight against narcotics.

“Justin is a true asset to the town,” said Johnson. “He also reaches out to people who are having issues. It’s not always about putting someone in jail, it’s also about assisting them in finding the right help.”

During a second presentation, Outer Banks Sporting Events executive race director Jenny Ash explained that the mission for her non-profit organization is to organize and promote sporting events that encourage healthy living, provide financial support for public education and contribute to the Outer Banks economy. 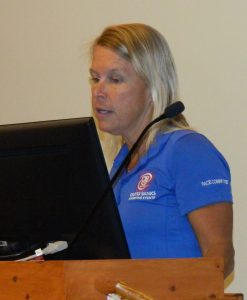 The result in 2018 for the five major events was 6,105 participants, with 1,084 of them providing an estimated $1.6 million impact to the Kitty Hawk economy.

During public comments, John P. Canning asked for help in getting a Tarkle Ridge Drive neighbor to cut his grass.

Mayor Perry said that in years past there had been such a code, but was repealed because it was not enforceable and required that grass be cut in areas that it was not desirable to do so.

Town attorney Casey Varnell encouraged Canning to have the homeowner’s association look into it.

“I would be surprised if the HOA is not able to do anything,” said Varnell.

Under new business, Jim Geraghty and Chuck Heath were reappointed as regular members of the Planning Board and Matt Spencer reappointed as an alternate member, with terms ending in June 2021.

Items approved in the consent agenda included April 29 and May 6 council minutes, $62,041 for a two year post construction monitoring service agreement with APTIM, $10,000 for the Government Education Access Channels Committee for history videos, $5,000 for professional work performed by architects Cahoon and Kasten for a new police station, $49,775 for East Tateway emergency pumping pipeline repairs and a hurricane/disaster debris removal agreement with Dare County.

During closing comments, Mayor Perry advised that he is willing to participate in a research committee for a branch library on the northern beach and an award was given to Kill Devil Hills, Kitty Hawk and Duck for the beach nourishment project without federal funds. 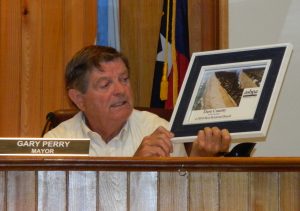