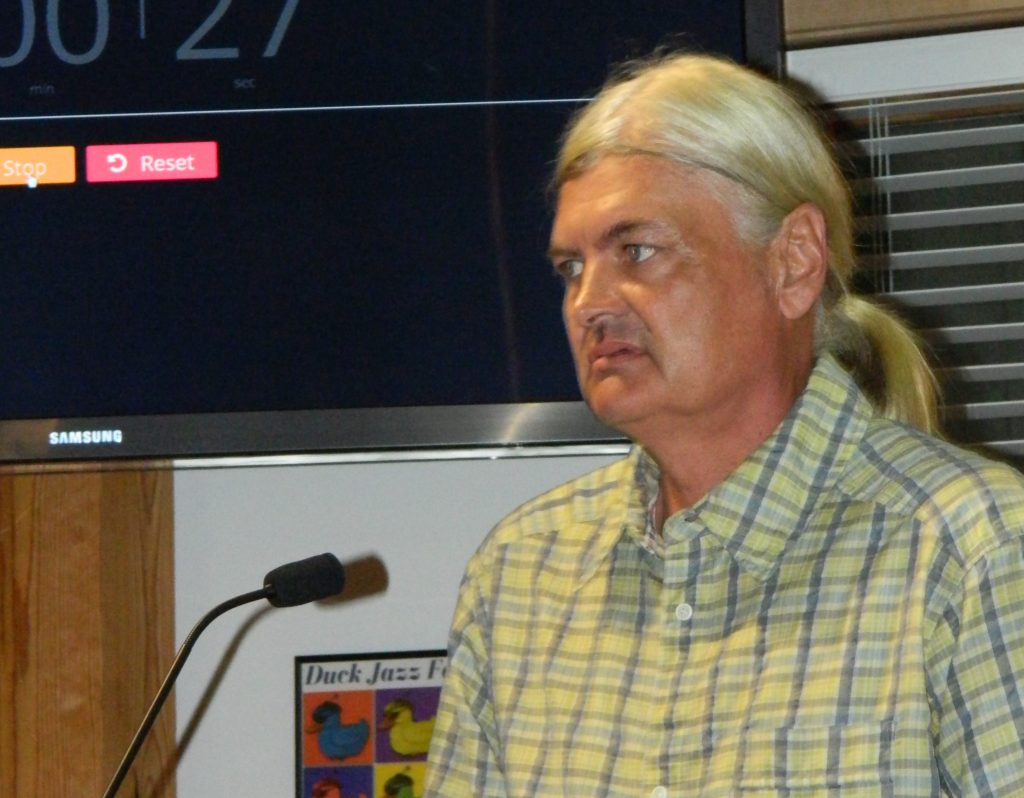 Robert E. Hovey was at the June 5 Duck Town Council meeting to say there is a need for public beach accesses in Duck for business owners and their employees. Philip S. Ruckle Jr. photo

When anticipated fireworks over a beach access issue failed to materialize during the June 5 Duck Town Council meeting, the only storm in Duck last Wednesday night was from falling rain outside.

Duck was thrust into the middle of an undeserved tempest over access to its oceanfront beach when Robert E. Hovey was taken into custody at Seabreeze Drive on May 29 and charged with second-degree trespass. A video of the incident made the rounds on social media, drawing considerable attention.

At the regular Town Council meeting the following Wednesday night, council members were prepared for a lengthy procession of speakers. With public speaking guidelines displayed on two overhead screens, town manager Chris Layton took a moment at the beginning of the council meeting to advise a crowded meeting room that the initial public comment period would include speakers who had signed up at three minutes each for a maximum of one hour. Only 30 minutes were needed.

During his time at the podium, Hovey maintained that he believed several accesses were deeded to the public and said he had deeds, although he did not produce any paperwork to support the claim. He went on to say there is a need for public access for business owners and their employees because not every citizen is allowed to go to the beach without fear of being arrested like he was. He also called for allowing public parking where public parking makes sense and working with the Army Corps of Engineers.

“I am willing to work with council toward a resolution,” said Hovey. “There has to be a resolution to this.”

Following Hovey, a dozen speakers, most from outside Duck, took turns at the podium.

While some said they support Hovey and the addition of public beach accesses, a majority of speakers simply stated they were in favor of a peaceful solution. A few felt opening up additional accesses might increase the number of people coming to Duck, while some asked where the money would come from and said they were concerned about the effect on taxes if Duck bought back the land.

Although North Carolina courts have consistently ruled that beaches are public, by the time Duck was incorporated in May 2002, all oceanfront property other than the U.S. Army Corps of Engineers Field Research Facility had already been platted as private property. Most were in subdivisions governed by homeowners associations.

A statement released by the town and available at the council meeting explained that “The Town of Duck does not restrict an individual’s use of the public beach, but it does not own or maintain any beach access locations in the town. Because the accesses are privately owned and maintained, the Town cannot grant permission for their use and unauthorized use could be deemed trespass as it would with any other private property.”

At the end of public comments, Mayor Don Kingston said there had been communication between Hovey and the town in recent days, adding that Town Council is open to discussing the issue at a later date when tensions have eased.

Kingston then thanked everyone for their comments and continued with the remainder of the night’s agenda.

With little discussion, the budget for FY 2019-20 was given unanimous approval. Expenses within the budget include:

Also approved was a simple change to a permit issued to Travis and Jessica Costin in 2017 for construction at 102 Scarborough Lane.

According to community development director Joe Heard, once the first phase of the building was completed, it was determined a design change was needed to have a set of steps wrap around the building to reach the upper level. The change would also reduce the setback on one side to about 12 feet.

After a brief review, the project was also given a unanimous approval.

The next action involved approving the addition of specific objective standards to the conditional use application process.

Applicants will now be required to produced substantial evidence that:
(1) The use meets all required conditions and specifications of the ordinance;
(2) The use does not materially endanger the public health or safety; and
(3) The use will not substantially injure the value of adjoining property, unless the use is a public necessity; and
(4) The use will be in harmony with the area in which it is located and be in general conformity with the comprehensive plan.

Under old business, Tom O’Brien, Randy Morton, Olin Finch, Carol A. Powell and Edward F. Sadler were re-appointing to the Board of Adjustments and Terri Cullen, Kevin V. Wright and Cindy Glatkowski will have their names forwarded to the Southern Shores Library Committee as representatives from Duck.

The next Duck Town Council meeting will be July 3 at 7 p.m.