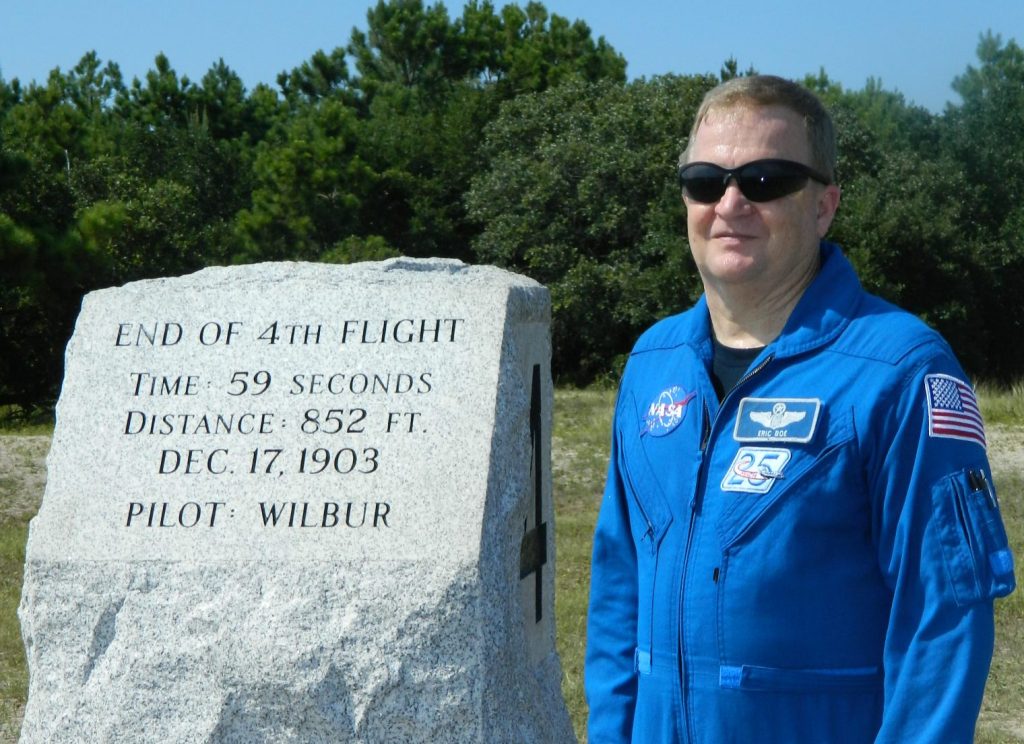 Astronaut Eric Boe visited the pylons that marked each of the four flights the Wright Brothers made in December 1903. Philip S. Ruckle Jr. photo

The term “astronaut” comes from a Greek word meaning “space sailor.” This past Saturday a National Aeronautics and Space Administration astronaut was at the Wright Brothers National Memorial to talk about his career sailing through space.

After viewing the Outer Banks from outer space, NASA Astronaut Eric A. Boe made his first visit to the area, in part to celebrate the 50th anniversary of the first moon landing, thanks to the efforts of the First Flight Foundation.

“It’s a real honor to be here at the birthplace of aviation and celebrate the 50th anniversary of moon landing,” said Boe. “I see space flight is a continuation of aviation. We can thank the Wright Brothers for their powered flight efforts, because that was necessary to get us to the moon.”

He went on to say that man’s first heavier-than-air flight 116 years ago was a feat that transformed the world. After air flight got us off the ground with, space flight you need a lot more power to get to the moon.

“The Wright Brothers started us on that track,” said Boe.

According to the NASA website, Boe is one of 38 active U.S. astronauts eligible for flight assignment. There have been more than 300 other former astronauts who have left NASA or are deceased.

During question and answer sessions with the public and media, Boe said on July 20, 1969, he was only four when astronauts Neil Armstrong and Buzz Aldrin became the first humans to set foot on the moon.

That may have prompted his interest in aviation.

Born in Miami, Florida, Boe grew up in Atlanta, Georgia. In high school he joined the Civil Air Patrol, then there were solo plane flights, the U.S. Air Force Academy, gliders followed by F4 and F15 flights. Before his 2012 military retirement as a colonel, Boe logged more than 6000 flight hours in more than 50 different aircraft.

Next was being selected to be a NASA astronaut in 2000, where he served as a pilot for STS-126 Endeavour and the STS-133 Discovery to the International Space Station. Boe was on the last space shuttle flight when NASA ended the program in 2011.

Boe said he is currently working with NASA and its commercial partners, Boeing and SpaceX, to certify Boeing’s CST-100 Starliner and SpaceX’s Dragon for flights to the space station. 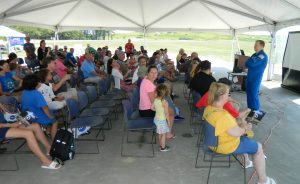 Astronaut Eric Boe held a question and answer session with a large crowd of visitors Saturday at the Wright Brothers Nation Memorial as part of the celebration for the 50th anniversary of the first moon landing. Philip S. Ruckle Jr. photo

“You have to travel at 17,500 mph to maintain an orbit around the earth,” explained Boe. “at that speed you circle the earth every 90 minutes.”

Boe went on to say the view from space is pretty amazing.

“It is amazing how precious our planet is,” said Boe. “Going to the moon was a challenge then and it’s a challenge now, although there are different challenges.”

Boe confirmed that the 1969 Apollo moon landing required new technologies, new communications and navigation systems, and a host of other changes as well.

There are changes even today.

In the 1960s, the main countries conducting space flights were the USA and USSR (Russia). Today there are a host of countries sending astronauts into space. Among them are the United States, Russia, Japan, Germany, China, France and Canada, as well as 25 others that that have put at least one person into space.

The United States leads the list with 335 and Russia is second with 117 including cosmonauts from both Russia and the Soviet Union. The next closest is Japan with 12.

According to Boe, the last moon visit was in 1972, but that NASA has not closed shop.

“NASA today launched a crew out of Kazakhstan to dock at the space station,” said Boe. “There are plans for a moon visit in 2024, and then from the moon to Mars and beyond. We could probably go to Mars today, but it’s a nine month trip and we have to consider the cost.”