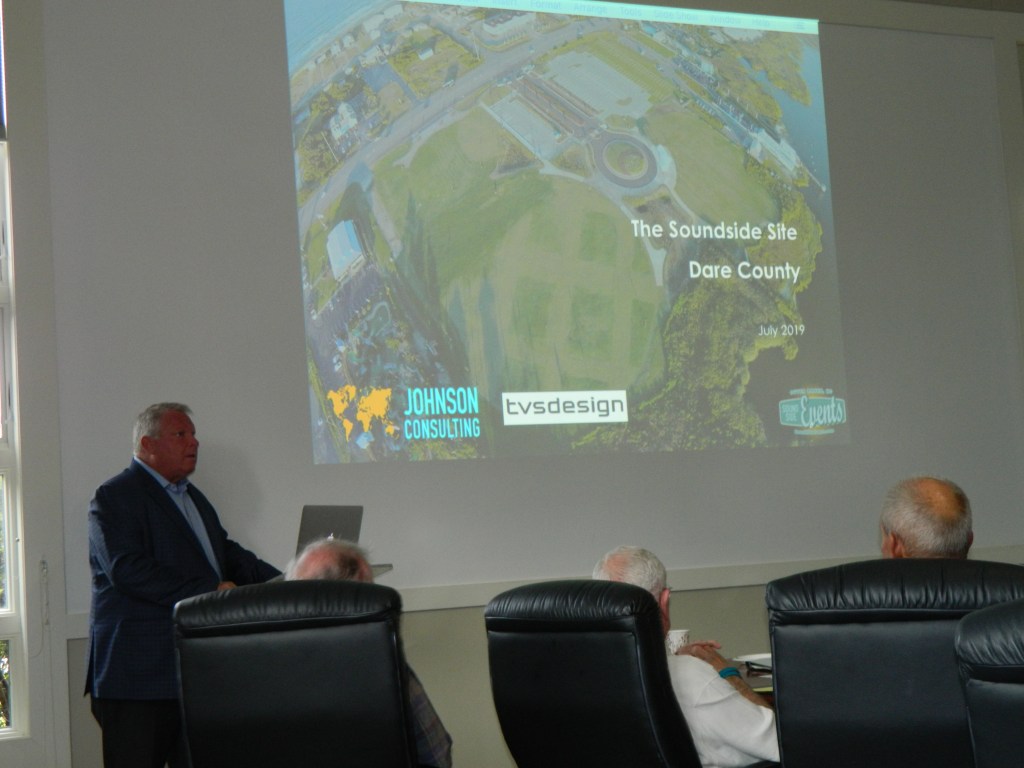 The Dare County Tourism Board members viewed a property use presentation Johnson Consulting president Charles Johnson, based in Chicago, Ill.

“You have a successful event site,” said Johnson. “It needs to be multifaceted to get into new markets.”

Suggesting that the property, located at 6800 South Croatan Highway in Nags Head, schedule local events in the winter and transition to tourist events in the spring, summer and fall months, Johnson went on to say the nature of the site calls for an innovative design.

Offering an assortment of features from various sites his company has worked with across the country, Johnson proposed three options that he thought help enhance the Nags Head property.

The first option, with a $14 to $20.5 million price tag, includes a 42,000 square foot multi-purpose event venue with glass walls on three sides.

The second option is a 56,000 square foot event venue with two other components; a 5,400 square foot ballroom with a capacity for 500 people and a hotel.

The third option was significantly different in that it recommends acquisition of the adjacent Pamlico Jack’s property to accommodate a hotel and parking.

Both the second and third option both carry a ballpark estimate of $64 to $77.5 million.

Johnson also called for a boardwalk connecting the event site with the outlet mall property and recommended the outlet stores reorient themselves toward the sound similar to the shops in Duck.

Johnson added that while operating at a deficit, by its tenth year the site could add $25 million to the local economy, provide 170 new jobs, and produce $1.2 million in tax revenue.

During discussions Tess Judge pointed out that Johnson’s plan calls for increased visitation by air, but there is considerable distance between Dare County and an airport that can handle a high volume of commercial flights. Johnson’s response was that although distance is definitely a liability and that people will have to work to get here, he believes that the Outer Banks has a certain “draw” and a large segment of people are willing to make the trek just to be here.

“The next step in the process,” Johnson advised, “is for the Tourism Board to create a task force to focus on the event site plan.”

Following the meeting, Dare County Tourism Board executive director Lee Nettles said the master plan for the event site developed around 2011 or 2012 called for a building. Nettles then added that the master plan stopped with the building.

“I would say that this study validates the previous master plan,” said Nettles. “In their professional judgment they saw the validity in the idea of a flexible event space that was primarily intended for entertainment. The idea of a hotel and ballroom would expand the idea.”

Although earlier plans recommended a hotel and conference center, the property was deemed too small to support that large a structure, and it was also a direction the board did not want to take.

“Based on the success of the Seafood Festival, the board elected to go with an event site with a building geared for events,” Nettles added.

When asked about the change in direction, Nettles advised that with the acquisition of the Dairy Queen property, the Tourism Board has more property now than it did in 2012 and with it, the potential to further expand that property. The Tourism Board is also nearing the end of a 10 year commitment to the property as an event site.

“We also have the experience of running the event site,” continued Nettles. “So it’s good for someone out of this market and experience in other facilities and sites to come in, look at what we’ve been doing for the last seven or eight years, and say we are on the right path and here are some additional perspectives on that building and how it fits into a broader plan.”

Nettles explained that the miniature golf course is no longer functional and in the process of being dismantled. The ropes course is a long-term tenant and there are no plans to change that.

“The timing of this report and presentation will give us guidance on the next 10 and potentially 20 years,” added Nettles.

The next Dare County Tourism Board meeting is at 9 a.m. on Thursday, August 15 in the Curtis H. Creech Memorial Boardroom within the Outer Banks Visitors Bureau office building at 1 Visitors Center Circle in Manteo.