Insurance Commissioner and State Fire Marshal Mike Causey wished a very happy birthday to Smokey Bear, the mascot of wildfire prevention in the United States, who turned 75 on Friday, August 9, 2019.

The Smokey Bear Wildfire Prevention campaign was created in 1944 and is the longest-running public service advertising campaign in U.S. history.

“Smokey Bear is one of the world’s most recognizable and lovable characters,” said Causey. “He’s been educating American children and families for generations about their role in preventing wildfires and Smokey’s message is just as relevant and urgent today as it was in 1944.”

Smokey Bear was created during World War II. With experienced firefighters deployed in the war, communities were faced with the difficult task of dealing with wildfires. Federal officials feared national forests could become targets. On August 9, 1944, the U.S. Forest Service created Smokey Bear as the national symbol for a fire prevention campaign.

Smokey’s face appeared on posters, billboards and postage stamps with his famous slogan: “Only you can prevent forest fires.” 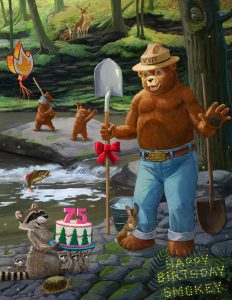 In 1950, firefighters in New Mexico’s Capitan Mountains found a bear cub with burn injuries to his paws and hind legs after a fire. The cub was named Smokey Bear in honor of New York Assistant Fire Chief “Smokey” Joe Martin. The bear died in 1976 and was buried in what is now called the Smokey Bear Historical Park in Capitan, not far from where he was found.

In 2001, Smokey Bear’s slogan was updated to: “Only you can prevent wildfires.”

Although Smokey Bear has already accomplished so much in his 75-year history, his work is far from over as wildfire prevention remains crucial, including here in North Carolina.

In 2018, there were 3,625 wildfires in North Carolina resulting in more than 18,000 acres burned across the state, according to the National Interagency Fire Center.

Founding Board of Directors for Outer Banks Forever announced