With billfish season in full swing along the mid-Atlantic, area offshore fishing vessels and crews are gearing up to get ready for the beloved ladies only billfish tournament – the Alice Kelly Memorial – which gets underway this weekend.

According to the event’s website, it was 30 years ago when a group of Alice Kelly’s friends came together to honor her memory and financially assist the Outer Banks Cancer Support Group.

Now, the Alice Kelly is one of the most popular lady angler events on the East Coast and organizers invite everyone to come out: “Join us for incredible fun and some serious fishing!”

Registration and Cookout for a Cure Kick Off Party took place Saturday, Aug. 10, with fishing and an awards dinner and dance with Cheap Thrills happening Sunday, Aug. 11. Good luck to all the anglers! 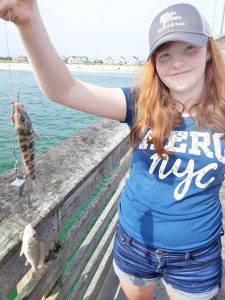 Hannah Boley of Harrisville, W.Va. had fun the other morning with this double hook up using a Frank’s Freaky Worm bait while bottom fishing at Jennette’s Pier in Nags Head. Courtesy Jennette’s Pier 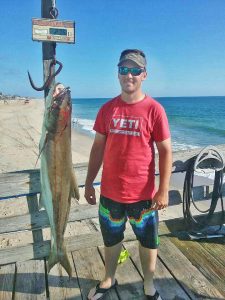 At Avalon Pier Tuesday morning, Troy Byrum said it was slow and that the live-bait anglers had missed both a cobia and a king on Monday. Late last week and over the weekend, however, plenty of catches were reported their Facebook page. 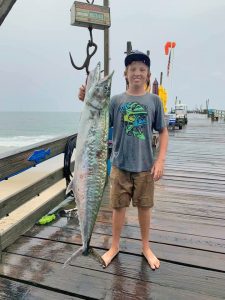 On a side note, later that night, the trio Government Cheese played a great mix of cover songs inside the pier house at the Stonefish Beachbar. “They were great,” said visitor Barry Clark of Charlottesville, Va.