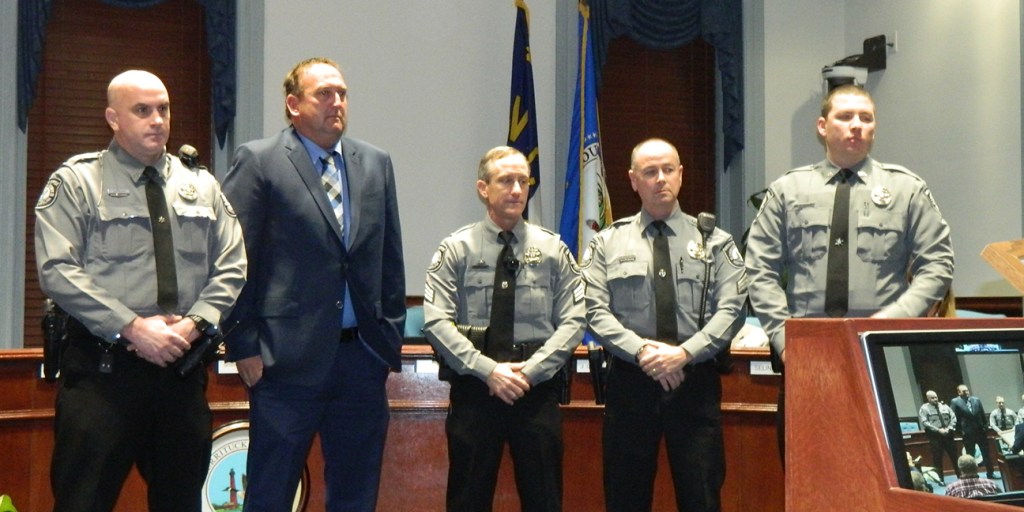 During commissioner’s reports, Chairman Bob White advised that Vice Chairman Mike Payment was absent due to a family death, adding that 2019 also saw the passing of former commissioner Marion Gilbert.

White went on to say that 2019 was a busy year with the Maritime Museum groundbreaking near the Currituck Beach Lighthouse and Outer Banks Center for Wildlife Education, the process begun for a Corolla Village walk and beach walkover work, completion of Carova road repairs in what appears to be a good private-public partnership, completion of work on the Ocean Sands water treatment plant and bringing a new county manager on board.

Other board comments included mention that a new Wendy’s restaurant is coming to Moyock, the new YMCA fields are a popular addition to the county with several tournaments already scheduled for the year and there were other icons in the county that passed away recently. Among them were Fletcher Humphries of Moyock and Carl Davis, who formerly owned Coinjock Marina.

It was also pointed out that social media has made a major impact on how people interact and that it enables a venue of false courage for some people, allowing them to offer criticism there that they will not say to your face.

All agreed that while 2019 was a busy year, moving forward 2020 is already shaping up to be equally busy with a lot of good things coming.

During his county manager’s report, Ben Stikeleather advised that there were already four applicants for a citizen’s academy and the applications are not up on the county website yet. Stikeleather added that there will be two academies, one in the spring on the mainland and another on the Outer Banks in the fall. Anyone interested should contact the county’s public information office.

According to Beickert, officers can qualify for an advanced certificate by meeting a number of requirements, which include completing considerable continuing education and/or training hours, having an associate or baccalaureate degree or a graduate or professional degree issued by an academic institution recognized by the United States Department of Education and the Council for Higher Education Accreditation.

Also recognized but unable to attend the meeting was Detective Swaney Dudley for being promoted to sergeant of the Criminal Investigations Unit, where she has served as a detective for the last 12 years.

Another recognition during the evening included passing a resolution celebrating the League of Women Voters and the 100th anniversary of the passage of the Nineteenth Amendment to the US Constitution.

Commissioner Mary Etheridge reminded everyone that passage of the Nineteenth Amendment for the right to vote came down to one vote.

“So every vote does count,” said Etheridge. “One vote is what made it possible for Mrs. Jarvis and me to represent the great citizens of this county and one vote has changed the course of history in several situations. Voting is a privilege we should all cherish.”

Other business for the evening included the authorization to purchase Kamstrup Meters from Fortiline, Inc. and approval for three nights of accommodations, registration fee and meals at the federal per diem rates for White to attend the March 22-24 Visit NC 365 Tourism Conference in Asheville as a member of the Tourism Advisory Board. Also approved were costs to cover the registration and federal per diem rates for lodging and meal costs for Payment to attend a Local Elected Leaders Academy leadership series through the School of Government at Western Carolina University in Cullowhee with sessions scheduled for March, April, May and June.

Board appointments for the evening included Ryland Poyner to the Fire and EMS Advisory Board, Charlotte Martin to serve on the Library Board of Trustees and Ted Jagucki to fill an unexpired term through January 2021 on the Recreation Advisory Board. Nominations approved for the Senior Citizens Advisory Board were Janet Taylor, Betty Ann Fairchild, Alisa Hugdahl and Roberta Defenbaugh as a new appointment to serve a full, two-year term ending February 1, 2022.

During public comments, commissioners also heard a request for help from Brady Landing residents Samantha Williamson and Cathi Feiock, who say the homeowners association has incorrectly applied a bylaw restriction in an effort to shut down Williamson’s home day care business.

Commissioner Paul M. Beaumont said he was aware of the situation and that the HOA misrepresented some of the legal restraints of the county and that the restriction the HOA used was to prevent aviation work within the community.

Beaumont added that the county would look into the matter further.

With regular business for the evening completed, commissioners entered a closed session to discuss a personnel matter.

The board then adjourned until its 6 p.m. Jan. 21 meeting.