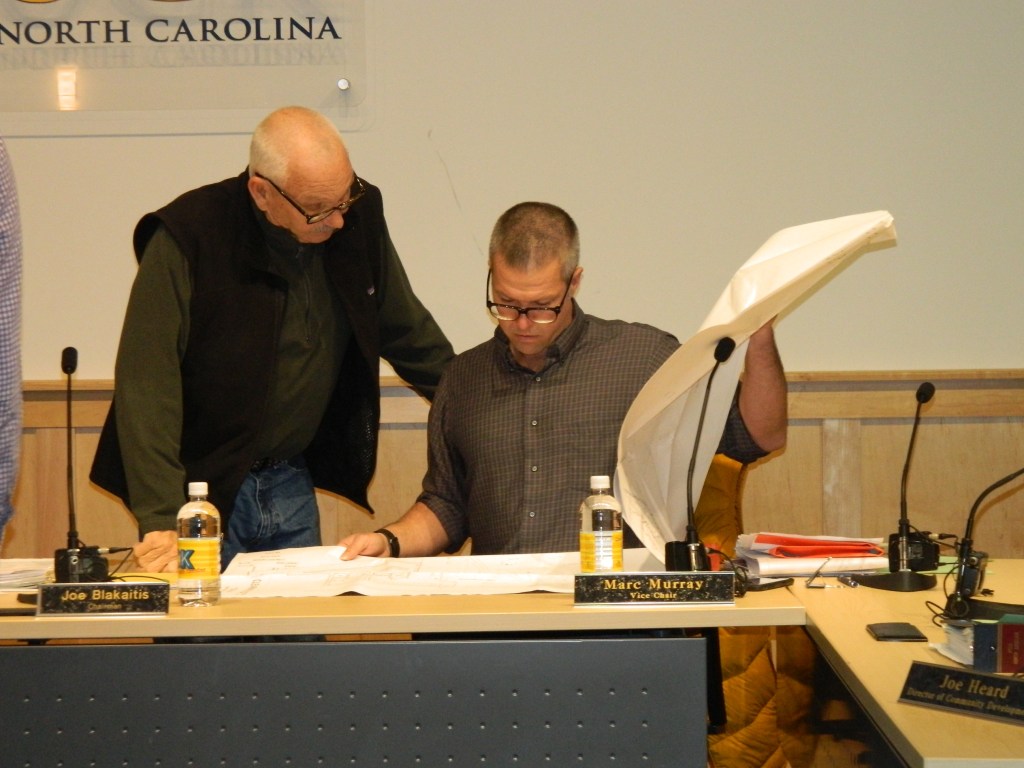 A larger than normal crowd was on hand Wednesday, January 8, for the regular session Duck Planning Board meeting where one proposed text amendment was approved, two special requests were voted down, and Board officers for the 2020 year were elected.

The first order of business for the four members present was officer elections.

Normally a five member board, Sandy Whitman’s election as a commissioner left a Planning Board vacancy that Town Council has not yet filled.

Although Whitman was at the meeting, he sat quietly as a non-voting council representative as Tim McKeithan nominated Joe Blakaitis for re-election to the board chair position. With little discussion, Blakaitis was quickly voted in by the other three members.

Selecting the vice chair proved to be a little less smooth when a motion by Blakaitis for Marc Murray to continue in that position was met with immediate opposition by James Cofield. According to Cofield, he felt that Murray had an area of expertise that is helpful to the board, but he was not in favor of Murray holding that position for the specific reason that about a year ago Murray indicated that the board’s job was to approve staff proposals and recommendations.

“That,” said Cofield, “is a fundamental disagreement with what I think our role and responsibility is as board members.”

Murray responded, saying that apparently his statement came across incorrectly and he would like to clarify that statement.

“My position was,” explained Murray, “that when applicants meet the requirements, I felt that we had a legal responsibility to approve a request.”

After a brief pause with and no second to the motion, McKeithan asked for further discussion and asked Cofield if he was interested running for the position. McKeithan then moved that Cofield be elected vice-chair, Blakaitis seconded that motion and the vote to approve passed 3-1 with Murray voting nay.

Moving on to the evening’s regular business, the first application involved a request from Greg Shaw to allow the use of more than three feet of fill for a renovation project and the addition of a retaining wall to support and stabilize the fill material at 142 Mallard Court.

After pointing out that he lives next door to Shaw, McKeithan was recused from the hearing and sat in the audience.

Community development director Joe Heard then explained that the proposed project would involve substantial clearing, grading and the relocation of fill from higher areas of the property in order to accommodate the construction of a 23’x32’ outdoor swimming pool, a 607 sq.ft. pool patio deck, an outdoor kitchen, a fireplace and golf cart garage at the rear of an existing four-bedroom, 2,218 square foot single-family residence.

Heard added that the 1/3 acre of property in the Tuckahoe neighborhood has a general L-shape with property lines running south off Mallard Court and then bending west toward Currituck Sound. He added that the property elevation also drops off steeply from a 36 foot height north of the existing residence to a low area adjoining the Currituck Sound less than 100 feet westward.

According to Heard, the construction plans meet some but not all required guidelines and that staff feels there are other options that would require less fill and lower retaining walls for the proposed improvements.

During discussion, board concerns appeared to be centered on the removal of several mature trees and that the proposed fill and grading would be more than the minimal amount necessary.

After a presentation by Shaw and a lengthy discussion by the board, Cofield said he saw no rational to deviate from staff’s recommendation to deny and his motion to deny the request passed 3-1 with Murray the lone opposition vote.

With McKeithan back at the table, the next request was from Sharon E. Hart who explained that she needed fill material and a soundfront bulkhead at 1398 Duck Road to counter the increased rate of erosion she is facing. Hart said Florence and Michael woke her up to how exposed she is and has since those storms lost a considerable amount of sand from the water line up to a pool, leaving the roots of several trees exposed.

Hart went on to say her project would include grading and adding fill up to 23 feet behind the bulkhead that would build up the height of the property across an area about 30 to 35 feet wide behind a three-foot high bulkhead along the Currituck Sound. Part of her justification for the special exception request is to accommodate bulkhead tie-back posts west of the existing swimming pool.

When asked if she had considered other mitigation measures such as living shoreline options, Hart responded that she didn’t know what alternatives she had and that other properties on the sound near her have bulkheads similar to and in line with what she has planned.

Also offering comments was her contractor, Whit Patterson with Albemarle Bulkheads and House Pilings, who pointed out that CAMA authorized a bulkhead about four feet further west than what Hart is planning.

He went on to say that his experience with living shorelines is that sometimes they work and sometimes they do not because when storms come up, the water will rise up and come over top of any breakwaters, scouring the sand behind it.

Citing concerns that there was not enough evidence presented for the amount of fill proposed since less fill would still provide cover for tree roots and prevent further erosion of the property, no justification provided for why the bulkhead and fill behind it need to extend out so far, no stormwater drainage plan, no analysis on the impact a bulkhead would have on adjoining properties and that there are other shoreline stabilization options that do not involve the need for any filling and bulkheading, the board voted unanimously to recommend denial of the application request.

The third and final application saw Murray recuse himself from board deliberations since he was the applicant.

Murray explained that his text amendment proposal would change the guidelines for swimming pool construction on oceanfront lots between the Ocean Erodible Area line and Ocean Hazard Setback line to allow above grade construction when the lot elevation is at or above the regulatory flood protection elevation.
Considered by all as a complicated and intertwined issue, Murry said the focus of the change was include an incentive to place pools further west of the dune line and encourage less dune disturbance.

During discussion, Cofield said he would prefer a more comprehensive and wider approach, but the consensus of the rest of the board was that the overall issue was too complicated and there were too many moving parts to tackle it all at once.

After Blakaitis pointed out that a more comprehensive approach could take a very long time, McKeithan added that while he agreed with a wider reach, approving this step would move it forward and the applicant could work on the other parts later.

McKeithan’s motion to approve the request as written passed on a 2-1 vote with Cofield voting no for philosophical reasons.

The applications from Shaw and Hart will go to council with a recommendation from the Planning Board to deny. Council will set a public hearing on the text amendment requested by Murray.

In other business for the evening, board members approved minutes from their November 13 meeting and held a brief discussion on the Dare County flood maps released in June 2016 by the State of North Carolina and FEMA and scheduled a 6:30 p.m. January 22 workshop for a closer review. The new maps will become effective June 19.

With business completed for the evening, board members adjourned until the Jan. 22 workshop.