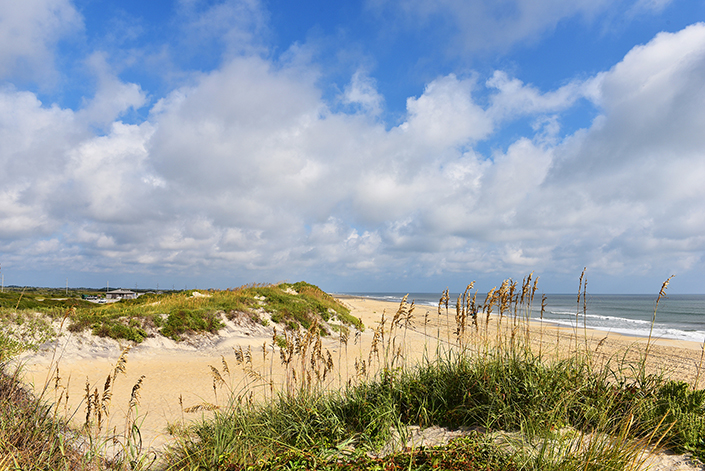 With participants spread out across the county linked by video and telephone connections, Dare County Tourism Board members met Thursday to take an initial look at a proposed 2020-2021 budget, vote on delayed First Flight Adventure Park rent payments and discuss a new advertising program for when the county is opened to non-residents.

During the budget introduction, Dare County Tourism Board executive director Lee Nettles said assumptions were made based on the impact of the virus.

“Nobody knows what will happen and it’s anybody’s guess, but you have to start somewhere,” he added.

The proposed budget checks in at $10,847,308 with several major changes over previous budgets all proposed due to the current COVID-19 situation.

Although North Carolina law requires 75 percent of collected monies go into the general fund and 25 percent is restricted money, the overall encumbrances, grants and other commitments limit what can be done with those funds.

“Making projections is always hard,” said Nettles in a phone conversation after the meeting. “Especially since actual revenue figures do not show up until two months after the fact. We just got our February numbers.”

Estimating that there could be some pretty severe losses into the summer, there have been several serious cuts to expenses. On the income side, revenues are decreased over previous budgets through October by as much as 75 percent or more, with other months estimated conservatively based on three-year averages and assuming travel patterns begin to return to normal.

Other cuts include decreased website advertising expenses due to the uncertainty of ad sales. All website advertising sales are currently on hold. Staff-wise, performance raises and COLAs have been put on hold with no increase in health insurance. Work hours for phone room and welcome center part-time employees are reduced and full-time salaries are decreased with an option to fill some time with part-time positions.

This budget also proposes eliminating both the Merchandise Fund and the Travel Guide Fund.

Nettles said although the Merchandise Fund has continued to provide a slight profit, that profit has decreased over the last three years. The Travel Guide Fund, on the other hand, was projected to lose money. The decision was made to cut the Travel Guide out this year and to instead use multi-page inserts in select magazines.

“We tried to toe the line on advertising and promotion budget, trying not to cut that,” Nettles continued. “Some fund balance money will be used, that’s why it is there, for extreme situation like this. And when things get better we can build it back up.”

A public hearing on the proposed budget was set for 9:15 a.m. on May 21. Board and public input could introduce changes adjusted for any virus impact before the board adopts a final budget in June.

As speculation continues on when Dare County will allow non-residents in, Tourism Board members discussed how best to plan for a return to normal.

“We need to figure out what our new normal vacation is,” advised Nettles. “Destinations all over the world are affected, so when things do open, every destination in the world will be advertising to get people to come there.”

According Nettles, recent research numbers show the jobless figures today dwarf those in the 2008-09 recession.

The tourism industry has been one of the hardest hit, continued Nettles, adding that the good news is it can be the first to recover.

Explaining that people are not ready to travel yet, Nettles went on to say he could see an advertising program that will stress safety; an advertising program centered around a pair of hands wearing surgical gloves that are cupped together to form a heart along with a tag-line of: Be Safe, Be Smart, Have Fun.

Nettles added that while people are pushing their travel plans back, a survey shows that people perceive North Carolina as a relatively safe state.

In other business for the day, board members approved a request to delay rental payment due dates for First Flight Adventure Park.

The Adventure Park had planned to open March 27, but that opening was canceled due to the current COVID-19 situation. Like many other Dare County businesses, the owners said they do not know when they will be able to open and requested a deferral of the May and June monthly building lease payments until the end of July, and delay the June 1 and September 1 yearly land lease payments until August 15 and October 15, respectively.

Also approved were minutes from the March 19 board meeting; a meeting continuity resolution that authorized the Tourism Board during public health emergencies to conduct its business via telephone, Skype or other electronic means provided legal counsel is available and public notice of a meeting is given along with a mechanism for the public to listen in; and a Budget and Finance Committee recommendation to transfer $200,000 from the Unappropriated Fund into the Online Advertising Fund to increase marketing and try to mitigate travel anxieties due to COVID-19.

The next Dare County Tourism Board is set for Thursday, May 21 at 9 a.m. in the Sarah Owens Welcome Center on Roanoke Island.