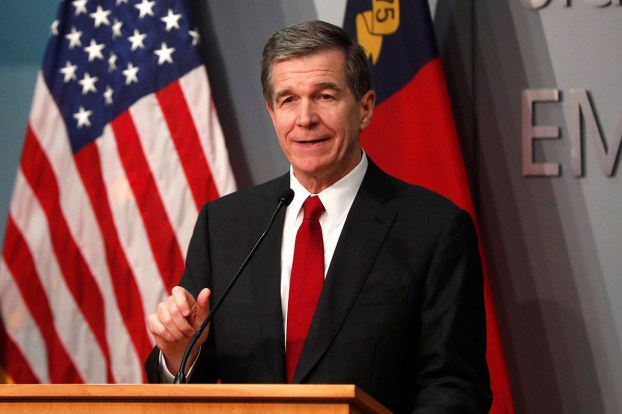 Hundreds of people angry and frustrated with North Carolina Gov. Roy Cooper’s stay-at-home order designed to blunt COVID-19 marched around his home Tuesday, demanding that he cancel the restriction now to unleash the state’s economy.

Carrying placards and banners, the chanting protesters gathered in a parking lot before being escorted by police motorcycles as they walked through downtown Raleigh streets, including those surrounding the Executive Mansion. The final participants in ReopenNC crowd, while raucous at times, dispersed peaceably after about three hours.

Cooper “needs to put his ear to the ground and he needs to look out his window and see how many people are here today gathering,” said Dee Park, 82, of Pinehurst, a retired college professor, holding an American flag and unmoved by any health risk to gather. “It’s time to open our state again and let people get back to work and make a living.”

Also, Currituck County commissioners announced Monday that they plan to reopen their Outer Banks areas to non-resident property owners on Thursday and to visitors on May 15. On Tuesday, Dare County announced it would permit non-resident property owners to return beginning on May 4. A statement from officials there said it will address access for visitors at a later date.

Cooper’s current order expires April 29, but the governor has said expanded widespread testing and supplies, extensive contact tracing and slowed case and hospital rates are needed before restrictions on movement and commerce can ease. Cooper told reporters later Tuesday that the state hasn’t done that yet even under President Donald Trump’s guidelines. He said that he would release more specifics this week about the goals that must be met to loosen the controls.

“I know that many people are frustrated, anxious and eager to get back to work and school. I also know that many people want to make sure that their families are as safe as possible from this virus,” Cooper said. The governor added he’s getting input from health, business, education and other leaders “as we prepare the plans to ease restrictions, protect the public health and get our economy moving forward.”

But the burden of Cooper’s orders allowing only essential business to open and other restrictions nationwide due to the new coronavirus keeps weighing many down. The state unemployment benefit office said it’s now received 689,000 initial claims since mid-March. And governors of some surrounding states — Tennessee, Georgia and South Carolina — announced on Monday plans to reopen some businesses soon. Similar demonstrations have been held across the country.

“Right now I’m choosing between to pay apartment rent . . . or a car payment and it’s been a disaster,” said Renay Perrell, 27, of Walkertown, a massage therapist out of work for weeks. Accompanied by her dog, Perrell said she wants Cooper to “understand that he doesn’t get to dictate what’s essential.”

More than 700 people participated in the first round of marching Tuesday, with at least 100 more staying behind.

The ReopenNC gathering was several times the size of a demonstration last week, when police arrested one woman after telling the group they were violating Cooper’s order. Raleigh police, and ultimately Cooper, drew fire after Raleigh police tweeted that protesting was a “nonessential activity.”

Cooper’s office told a ReopenNC lawyer on Monday that the protest was lawful as long as participants stayed at least six feet apart. But such social distancing was rare among the demonstrators, most of whom didn’t wear masks. And police officers didn’t appear to be aggressively enforcing that rule.

Nearly 7,000 people have tested positive for COVID-19 as of Tuesday morning, according to the state Department of Health and Human Services, with more than 210 deaths. Over 425 people are currently hospitalized. For most people, the new coronavirus causes mild or moderate symptoms. For some, it can cause severe illness or even death. Cooper said the current stay-at-home order has helped keep hospital beds open and saved lives.

ReOpenNC co-founder Ashley Smith said the movement, which claims more than 64,000 members on its Facebook page, isn’t political in nature and hasn’t received outside money. The movement is about speaking up for closed businesses and for workers, she said, “many going broke, plain and simple.”

Pro-Trump clothing and regalia could be seen among Tuesday’s participants, and the event attracted Republican politicians, including U.S. Rep. Dan Bishop of Charlotte.

“I’m here because I’m sworn to defend and protect the Constitution and these folks are standing up for it,” he told reporters.

For the coastal re-opening, Dare and Currituck counties both established checkpoints on U.S. Highway 158 at the Wright Memorial Bridge in the midst of the outbreak to control the spread of the virus.

Plan for gradual lifting of restrictions on entry to Dare announced

Dare County’s plan to gradually lift restrictions on entry into the county has been released. “With careful consideration of the... read more