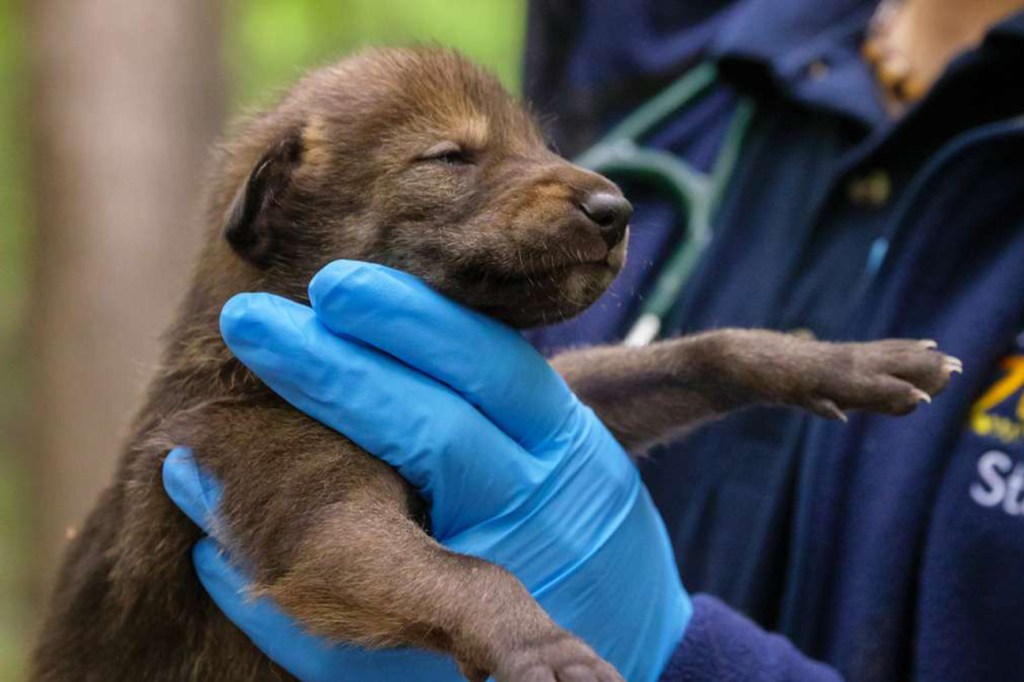 The North Carolina Zoo in Asheboro has announced the birth of five American red wolves as part of its American red wolf breeding program. Red wolves are critically endangered. Friday’s announcement about the five new pups – three males, two females – stated they were born Tuesday, April 21. The pups and their mother are all healthy and doing well.

“There are currently only 15-20 red wolves found in the wild, only in eastern North Carolina, making them the most endangered canid in the world,” stated the zoo’s release.

In celebration of North Carolina, the wolf pups were named after plants found in the state. The names for the males are Oak (Appalachian Oak), Cedar (Red Cedar) and Sage (Azure Sage). The females are named Lily (Carolina Lily, the state’s wildflower) and Aster (Piedmont Aster).

The pups are the offspring of mother Piglet and father Jewell. This is the first litter for this pair.

This litter brings the number of red wolves in the zoo’s breeding program to 25, making it the second-largest pack in the U.S. after Point Defiance Zoo and Aquarium in Tacoma, Washington, according to the release.

“The pups are being kept in a quiet, non-public viewing area of the zoo and have minimal contact with staff and keepers,” stated the press release. “This allows their mother to raise the pups with the least amount of stress in a natural habitat.” 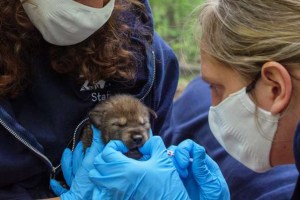 “Congratulations to the North Carolina Zoo for playing an essential part toward helping this critically endangered species recover,” said Susi H. Hamilton, secretary of the N.C. Dept. of Natural and Cultural Resources. “It’s yet another example of the zoo doing amazing work to conserve wildlife and wild places.”

Once common throughout the southeastern United States, the wolves were driven to near extinction during the late 1960s, but the U.S. Fish and Wildlife Service began an aggressive conservation effort – the American Red Wolf Recovery Program – that led to new ways to track and protect the species, according to information from the zoo.

The North Carolina Zoo has been part of the American Red Wolf Recovery Program since 1994. The zoo’s red wolf pack has bred eleven pups over the past three years and has successfully bred 34 wolves since the program began. Currently, there are about 240 (that number can change daily during the whelping season) red wolves in breeding programs throughout the United States. Red wolves normally have three to five pups per litter.

The North Carolina Zoo led the successful efforts to have the American red wolf become part of the Association of Zoo and Aquariums SAFE (Saving Species From Extinction) program.

Under this program, the zoo leads in conserving the species and growing both the population in the wild and the animals under human care.

To learn more about the North Carolina Zoo and their red wolf program, visit www.nczoo.org.

Red Wolf Revival: Addressing a species in danger of extinction