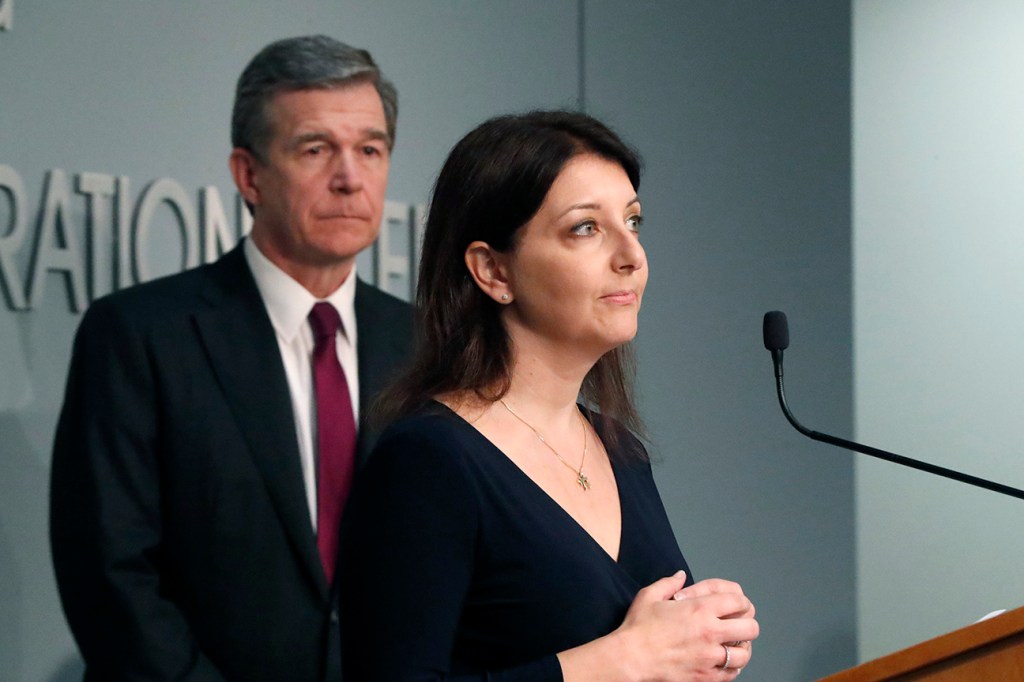 Dr. Mandy Cohen, secretary of the state Department of Health and Human Services, speaks during a briefing on the coronavirus pandemic at the Emergency Operations Center in Raleigh on Thursday, May 28, 2020. Governor Roy Cooper stands in the background. Courtesy NC Department of Public Safety

President Donald Trump and North Carolina’s governor disagreed on Friday over the viability of a full-fledged Republican National Convention, the governor’s office said, as Trump does not want to see signs of the pandemic in his renomination audience.

Democratic Gov. Roy Cooper and Trump spoke by phone, during which they discussed the scheduled August convention in Charlotte, a Cooper spokeswoman confirmed Friday night to the The Associated Press. Trump this week threatened to move his formal renomination elsewhere if he does not get guarantees by next week of being able to hold a large-scale event.

The convention set to begin Aug. 24 is supposed to have events in Charlotte’s downtown sports arena, capped by Trump’s nomination speech on the 27th.

During the call, when Trump “insisted on a full convention arena with no face coverings and no social distancing the governor expressed concerns and suggested a scaled back event with fewer attendees,” Cooper spokeswoman Sadie Weiner wrote in an email. “They agreed to continue talking about ways to have a safe convention in Charlotte.”

The conversation came hours after Cooper’s health secretary, Mandy Cohen, called for more specifics beyond the safety protocols that the GOP convention’s leaders sent her in a letter on Thursday. Cooper’s administration has wanted more planning about public health and safety given the uncertainty COVID-19 has caused regarding commerce and movement restrictions.

Cohen wrote Republican National Committee Chairwoman Ronna McDaniel and convention CEO Marcia Lee Kelly asking them to confirm whether Trump wanted the convention’s final night to have “people together in a crowd-like setting” and without social distancing or face masks for participants.

Cohen also wanted numbers on how many people would be inside the Spectrum Center nightly, and how social distancing would occur there.

Kelly and McDaniel wrote that they needed further direction and assurances from him by next Wednesday to move forward on a convention they said would bring a massive economic boost to the city.

The Republican National Committee declined to comment Friday night. Earlier Friday, McDaniel told a Charlotte radio station it appeared Cooper was dragging his feet on a decision and attributed it to a “little bit of gamesmanship” and politics. Cooper is seeking reelection this fall in a state Trump won in 2016.

“We are very happy for them to give us guidelines, but ultimately it’s going to come down to the elected officials to tell us how we can conduct our convention, and then we can plan,” McDaniel told WBT. “We’re still hoping to make it work, but we’re not going to wait indefinitely.”

Cooper suggested to reporters on Thursday that the state had no timeline. Florida and Georgia’s governors have said they’re interested in hosting the convention.

Right now, Cooper’s COVID-19 executive order prevents mass indoor assemblies of more than 10 people, but that could change in the weeks leading up to the convention if case and hospitalization numbers keep improving.

While Republicans offered on Thursday several proposed steps to screen and protect convention attendees’ health, it lacked a final safety plan — something Cohen and Cooper said they want, such as one that NASCAR offered before racing last weekend at Charlotte Motor Speedway, albeit with no fans.

Mecklenburg County, which includes Charlotte, has by far the most COVID-19 cases in the state, with more than 3,800 cases as of Friday morning and roughly 90 deaths.