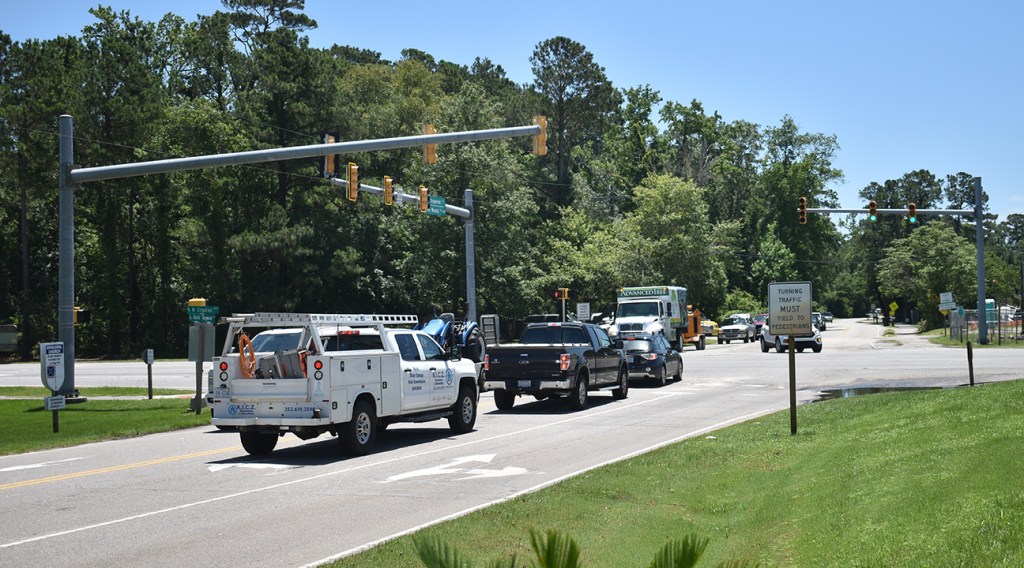 The intersection of US 158 and South Dogwood Trail in Southern Shores. Danielle Puleo photo

After many months of discussion, the Southern Shores Town Council unanimously decided to pursue a beach nourishment project at their meeting on June 16.

This will be the first time the town engages in such a project; they will join their neighbors, Kill Devil Hills, Kitty Hawk and Duck in a nourishment project for the year 2022.

After Ken Wilson with Coastal Protection Engineering joined the meeting via zoom on Tuesday, the council inquired about several aspects of the proposal with their chosen beach engineering firm.

Wilson was ready and willing to help and move forward with plans, if the board so chose: “If you ask us a fair question, we are going to give you a fair answer.”

Mayor Pro Tem Elizabeth Morey was hesitant to approve before having the town’s new town manager involved, which would not be until mid-July.

After many residents voiced their thoughts at public comment, it seemed the town as a whole was split between wanting beach nourishment and not being in favor of the project. Some still had questions about tax rates and lengths.

The council agreed that education on the matter was needed, and felt that providing that information via their newsletter, website and other social platforms would help the community better understand the logistics of the project and what it would entail.

Ultimately, the five members of council agreed it was time for a decision. “Some sand is better than no sand, and that’s kind of the tipping point in my opinion,” said councilman Matt Neal.

Councilman Leo Holland concurred: “We have to ask ourselves why people come here; it’s the beaches. If you look at the beaches as an expense, then you don’t do anything, but I look at it as an asset and I think we need to look after it.”

Neal motioned to pursue a beach nourishment project and all were on board. “I would love to see the beach stay the way it is . . . but I’m not willing to give up beachfront homes because that’s 25% of our tax base; that would be shooting ourselves in the foot, I think,” said Morey in the discussion that followed. Unanimously, council approved the motion.

Other business addressed concerns brought forth at public comment regarding the unexpected traffic that has occurred in the town over the last two weekends.

Mayor Tom Bennett relayed to his council members and the public that he had spent some time working on a solution. He mused whether it was “worth it” to close access to S. Dogwood Trail from eastbound traffic on US 158.

He admitted that “in the past, I have not been an advocate for closing our roads,” but the traffic has caused a stir within the town.

After receiving North Carolina Department of Transportation’s blessing, meeting with officials in Kitty Hawk and seeking guidance from the town attorney, Bennett asked council if closing the road for two more weekends, in addition to their previously agreed upon “No Left Turn” weekends, was appropriate.

The council voted for a budget amendment to put $7400 towards hiring a contractor to oversee the “No Left Turn” events scheduled in June. The road closure will be in place July 4 and 5, July 25 and 26, and August 1 and 2 as well.

The unanimously agreed upon motion included a resolution to notify local authorities of the events.

In a continued discussion from their previous meeting, councilman Jim Conners elected to withdraw a motion he had made to re-hire Anlauf and Deel as the town engineer. In follow-up, he motioned to retain Anlauf and Deel Engineering to serve as the town engineer for two years, commencing July 1, 2020, and initiate a contract that could be extended one or more additional years by the town manager with council approval.

Neal and Morey, who had wanted to wait for the new town manager to come on board before making a decision, sided with the majority and favored the motion. It passed 5-0.