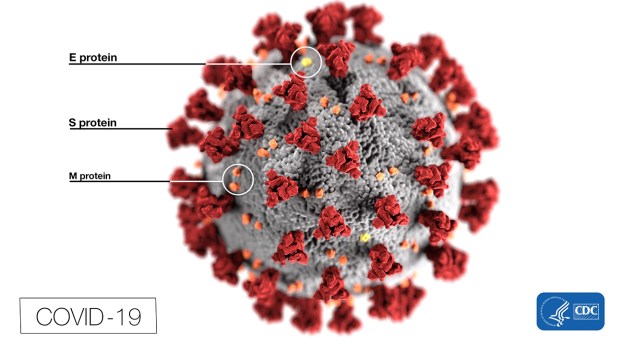 This illustration, created at the Centers for Disease Control and Prevention (CDC), reveals ultrastructural morphology exhibited by coronaviruses. Note the spikes that adorn the outer surface of the virus, which impart the look of a corona surrounding the virion, when viewed electron microscopically. In this view, the protein particles E, S, and M, also located on the outer surface of the particle, have all been labeled as well. A novel coronavirus, named Severe Acute Respiratory Syndrome coronavirus 2 (SARS-CoV-2), was identified as the cause of an outbreak of respiratory illness first detected in Wuhan, China in 2019. The illness caused by this virus has been named coronavirus disease 2019 (COVID-19).

Of the 170 residents with positive tests, 69 are in home isolation; two are hospitalized; one has died and 98 have recovered or been asymptomatically cleared.

Of the 122 non-residents with positive tests, 45 have transferred isolation to a home county. Seven reportedly remain in isolation in Dare County and 70 have recovered or been asymptomatically cleared.

About reducing the spread of the disease, the Dare update stated “the majority of cases are occurring because of direct contact in social circles or households. We are seeing friends spreading the virus to friends as well as family members spreading it to family members. There is also an indication of community spread since some individuals are unaware of how they acquired the virus. This number of individuals contracting the virus through community spread, however, is lower compared to those who acquired the virus by direct contact with an individual who had previously tested positive.”

Another testing clinic will be held Tuesday, July 28, 2020, starting at 1 p.m. at Dare County Center located at 950 Marshall Collins Drive in Manteo. Individuals can register for an appointment for the diagnostic test, the antibody test, or both. Registration is required.

Dare County is partnering with Mako Medical Laboratories for these testing clinics.

As of 3 p.m. on July 22, Hyde County Health Department reported 35 total cases for Hyde. Of those, 32 have recovered and three are reported to be active positive.

Hyde’s health department issued a press released Wednesday stating that a workplace outbreak in Swan Quarter has been resolved. “Thanks to the joint efforts of the Hyde County Health Department and a Swan Quarter business owner, what was classified as an ‘outbreak’ in a workplace setting has been resolved,” stated the press release. “People who are visiting the NC DHHS COVID-19 Dashboard website may have seen that case counts spiked between July 9 and July 17, which was related to this outbreak.”

The Hyde County Health Department partnered with Mako Medical for a testing event last week and the release stated the “event was a success with 20 participants who have received their results.” It was also stated that additional testing events are being planned, including both Ocracoke Island and the mainland. Information on dates and locations is forthcoming. For questions or information, call 252-926-4399 Monday through Friday from 8 a.m. to 5 p.m.

On July 22, the Martin-Tyrrell-Washington District Health Department reported four additional cases and one additional recovery for Tyrrell, bringing that county’s total to 83 lab-confirmed cases with 70 recoveries. One death has been recorded in Tyrrell County.

The Dare County Board of Commissioners unanimously approved a conditional use permit for Beachland Farms Campground, a 50-space travel trailer... read more