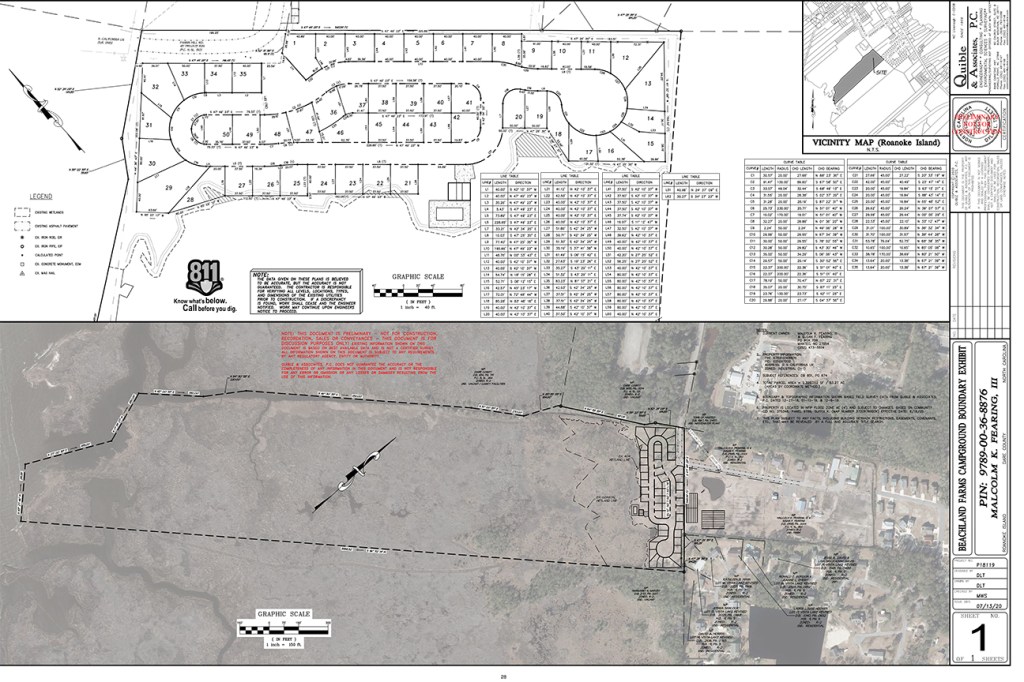 Dare County attorney Robert L. Outten outlined the steps for the quasi-judicial hearing. He told the commissioners “you do not have the authority to deny” the permit. He said the commissioners can put conditions on the development.

Malcolm Fearing as property owner told the commissioners “we want to be good neighbors.”

With Fearing were attorney Benjamin Gallop with Hornthal, Riley, Ellis and Mayland as well as engineer Dylan Tillett with Quible and Associates.

One of the issues is how much wetland will be filled. Tillett reported 2,522 square feet or 0.06 acre will be filled. The wetland filling will be reviewed by six federal and state agencies.

Seven citizens spoke in opposition to the proposal.

Lester Page, who lives in Vista Lake, said his subdivision was flooded out two years ago by a bad hurricane. His car was totaled. About the campground, he said “it’s going to be heavily impacted by surge from the sound.”

Page also said, with a hurricane coming, the travel trailers “will not get out of there. Debris will go into Vista Lake and Viccars Lane.”

“We need a heavy bond on this thing,” said Page.

One of the conditions addresses Page’s concern.

Condition No.14 states the park owner “shall be responsible for the removal of any damaged travel trailers or recreational vehicles that may result from storm conditions or other natural disasters.” The park owner is responsible for debris removal and damaged units cannot be placed on or abandoned on the right-of-way of any public or private road. Violations of the condition shall be considered littering.

Patricia Gale said the development will definitely impact wildlife. “Any impact is too much,” she said. She asked for a complete impact study.

Jesse Davis was concerned about declining property values. He also questioned the impact of the raised septic system. Engineer Tillett replied that a drainage ditch is available to handle runoff. Davis responded that the ditch was in his backyard.

Nevin Wescott, a 32-year resident, called the campground “this terrible wrong behind our community.”

He said “nobody is going to sit on a back porch and see an RV park.”

He said “there’s going to be a slip up with connections.”

One of the conditions in the permit prohibits open campfires. Wescott still is concerned about grills. He remembered a marsh fire six or seven years ago. North Carolina Forest Service put it out.

He voiced concern about the size of current trailers and RVs. “I can tell you that they cannot come to Bowsertown and make the turn.”

He pleaded: “Don’t let this happen to us.”

Attorney Gallop objected to testimony about traffic and land valuation as the testimony was “not competent,” meaning it was not offered by a professional.

Ross raised the adequacy issue of Bowsertown Road. Gallop responded that traffic concerns need to be brought by a traffic engineer. Trailer size will be “self-limiting.”

Fearing said it is a state-maintained road.

Commissioners went down the list of complaints raised by those offering testimony.

Board Vice Chairman Wally Overman made the motion to approve the site plan and conditions. The motion was seconded by commissioner Jim Tobin.

Overman said of Fearing: “He will be a good neighbor.”

The specific conditions set out for the campground’s Conditional Use Permit are:

– Trailers permitted to park year-round but must be fully licensed and ready for highway use.

– The units shall not be used as permanent dwellings.

– No additions, decks, porches or other appurtenances permitted. A 100-square foot entrance landing is allowed.

– A 20-foot wide gravel road built to NCDOT sub-base standards is to be used as access to sites.

– Utilities include water from the Dare County system. On-site wastewater systems approved by Dare County Health Department are to be used.

– A bathhouse facility is required by the county’s Travel Trailer Park Ordinance.

– A vegetative buffer strip must be constructed around the perimeter of the park. A solid fence six feet high must be installed along the southeast boundary adjacent to campsites 9 through 12 which abut properties in Vista Lake.

– All supplemental state and federal permits must be secured before installation of any improvements.

– A copy of the tenant lease must be provided to Dare County Planning Department.

– Travel trailer park owner is responsible for removing any damaged trailers or recreational vehicles resulting from storms or natural disasters. Units cannot be placed or abandoned on the right-of-way of any public or private road.

– Open campfires are prohibited in the park.

– Signage is subject to separate review under the county’s sign ordinance.

– Infrastructure improvements shall be installed within 12 months of the date of the permit.

Turning change into a donation