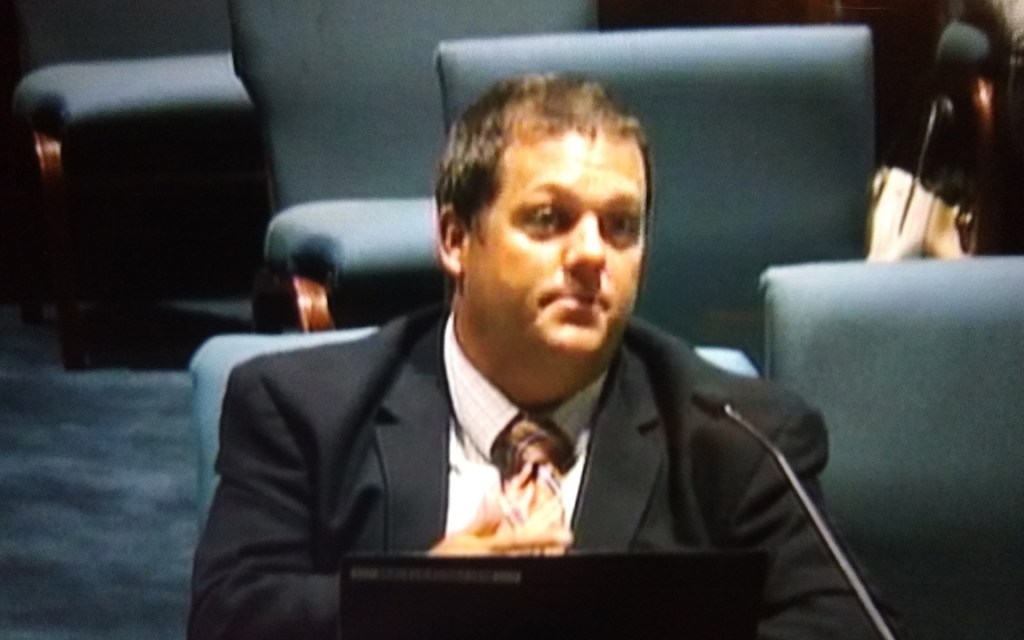 County manager Ben Stikeleather announced during the August 17 Currituck County Board of Commissioners meeting that under the governor's order, Parks and Recreation staff will need to make adjustments to various sports programs, but parents need to sign their children up so that staff can make the decisions needed to schedule those programs. Currituck County video still

The August 17 Currituck County Board of Commissioners meeting opened with a flood of requests from county residents.

About a half dozen people spoke during public comments providing details on how much standing water was left in their yards following several consecutive days of rain. In some cases, homeowners said there was as much 20 inches of standing water. Although the majority of residents speaking were from the Moyock area, commissioners Mike Payment and Kevin McCord advised that problem was not limited to any one area and that all areas of the county suffered flooding issues during this month’s rain events.

Payment added that his house in Grandy flooded and, like many others in the area, he has no flood insurance. McCord then pointed out that he recorded more than 22 inches of rain deposited during the past 13 days.

“There was no rain before August 4,” McCord advised, “and we have taken a beating with the rain.”

Following the public comment period, Chairman Bob White advised that there was a bigger discussion need on the issue and an August 25 meeting on flooding and stormwater management might be the place for it.

Moving on to action items for the evening, the first item included a request by Steven W. Craddock to amend the county’s Unified Development Ordinance related to extractive industry (mining) standards.

According to Craddock, the proposed guideline changes are intended to address potential UDO violations for operations near residential subdivisions.

He advised that even though the proposal has already been modified five times, he is in agreement with a staff recommendation that action be delayed long enough to allow him time to meet with current mining operators to resolve their concerns that they would become non-conforming operations.

The issue was tabled until the September 21 meeting to allow time for modifications to the wording. 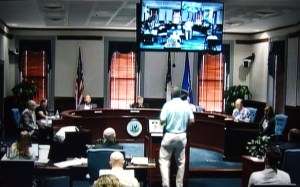 The first half hour of Monday’s Currituck County Board of Commissioners meeting included public comments from several people about flooding issues in the Moyock area. Currituck County video still

After a split vote at the July 20 meeting, development plans for New Bridge Creek Estates, a 37 lot conservation subdivision off Catatoke Highway in Moyock, was back on the table. White, who was unable to attend the earlier meeting, advised he reviewed the meeting video and was prepared to vote Monday.

During a brief discussion, commissioner Paul M. Beaumont pointed out that there was no testimony related to the surrounding property values and that was a major requirement for the applicant. A motion to approve the request failed, which was followed by a motion deny a use permit that passed on a 4-3 vote.

Other business for the evening included a property exchange for county-owned property fronting Grandy Road with adjacent property owned by Jeffery G. Brodil. The swap of 0.219 acres of county property for 0.426 acres of Brodil’s property is intended to allow Brodil better access to the other 17 acres there.

Also approved were updated requirements for public building and repair construction contracts, a resolution adopting a prequalification policy for construction and repair work, a resolution authorizing the sole source purchase of computer hardware and software from Instrulogic, LLC for operation of Mainland Water and Southern Outer Banks Water Systems, replacement of a damaged fiberglass tank for a Lower Currituck VFD vehicle, a budget amendment for CARES Act monies, a vote to extend the lifeguard contract along with three additional stands since the season has expanded into November and the beaches are expected to remain busy, and a consent agenda with an emergency family medical leave revision, job description revisions several road addition petitions and previous meeting minutes.

Interfaith Community Outreach executive director Jenniffer Albanese was also on hand to give an overview report on how her organization provides assistance to Currituck residents facing a temporary emergency.

Commissioners ended the meeting with a closed session to discuss personnel matters.