Draft EIS for Cape Hatteras National Seashore out for review 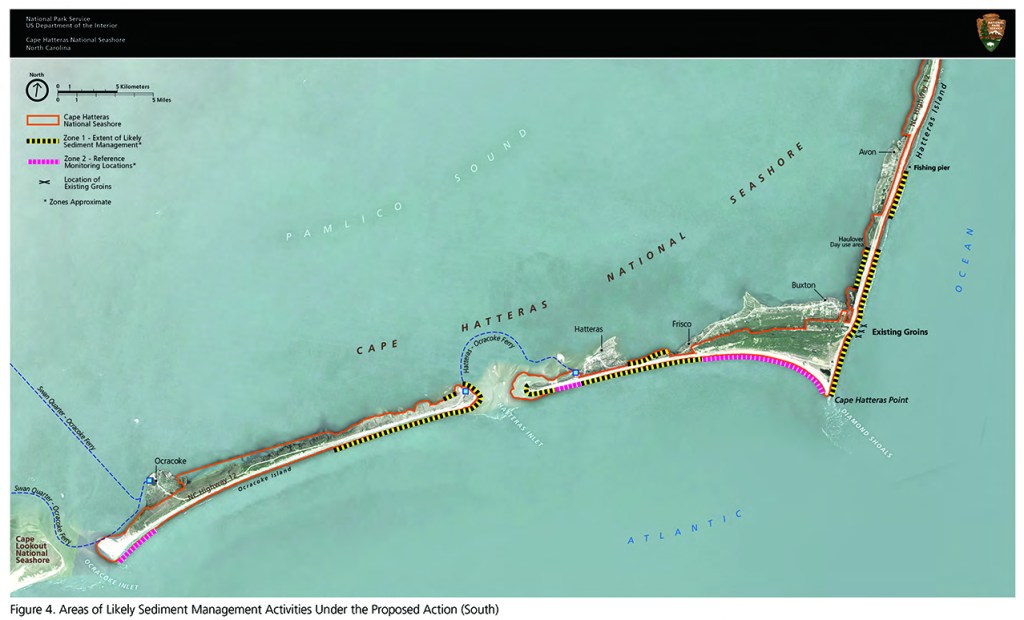 On Sept. 29 and 30 and Oct. 1, webinars were held at various times to introduce the draft and for the public to ask questions.

On Tuesday, 18 people joined the webinar; on Wednesday, 26 and on Thursday, Oct. 1, eight.

“I have been impressed by the public participation and dedication of time during our scoping process in April and Draft EIS meetings this past week. We appreciate and value all of the thoughtful questions and ideas that have come our way because they help to improve the Seashore’s suite of alternatives plans and our analyses,” said David Hallac, superintendent of National Parks of Eastern North Carolina.

The project purpose is to develop a framework for issuing special use permits for sediment management for beach nourishment, dune restoration and filling island breaches in CHNS.

The framework addresses possible requests for the next 20 years.

CHNS needs an approved Environmental Impact Statement to reduce response time to requests for special use permits for sediment management and to avoid or reduce various impacts of such projects. 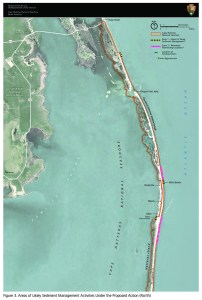 The following alternatives were considered for inclusion within this framework but dismissed: hardened structures, new bridges, winter-only beach nourishment, living shoreline and marsh restoration, removal of the Avon Pier, unlimited beach nourishment, relocation and abandonment of NC 12, coastal retreat and abandonment of the Seashore, dredging within the Seashore boundary. CHNS boundaries are mean low water line on the ocean side and 150 feet into the Pamlico Sound from mean low water line on the sound side. The reasons for dismissal are found at the end of Chapter 2 of the draft statement, pages 30-32.

Under Alternative A, no beach nourishing would be permitted for 20 years. NCDOT could not move outside its easement and Dare County would not receive permission for nourishing Hatteras Island village beaches.

In Alternative C, sediment management projects would be limited to up to six miles every five years. No monitoring areas would be established.

Alternative B is the one preferred by the National Park Service, which could issue special use permits to other agencies and local governments for sediment management projects.

Projects could be implemented along 54 miles of seashore, but five sections, about 13 miles, would be set aside to serve as reference zones for comparison with nourishment projects.

The reference zones, which are not adjacent to a highway or villages and have low erosion rates or significant beach width, or were requested by cooperating agencies, are:

– Pea Island National Wildlife Refuge: Two miles from the north end of the Rodanthe Bridge to the refuge boundary with the village of Rodanthe.

– South of Salvo: Two miles from Village of Salvo to one mile south of Ramp 25.

– Cape Hatteras Point to Frisco: Five miles from the point to an area west of Ramp 48.

– Hatteras Island terminus: Two miles from ramp 55 to an area near the end of the island but not including the end.

– Ocracoke Island terminus: Two miles from ramp 72 to the intersection with Ocracoke Inlet

Pamlico Soundside areas that may be subject to sediment management actions include Haulover Day Use Area, Salvo Day Use Area, Frisco to Hatteras (NC 12) Sandy Bay “Isabelle Inlet” and areas near inlets which typically provide valuable nesting habitat for shorebirds.

Under Alternative B, beach grass planting on dunes and installation of sand fencing may be carried out by the National Park Service or the permittee; breach repairs may be addressed by trucking, staging and pumping sand from other locations.

Project parameters for Alternative B outlined in the draft plan include:

– Borrow areas used in past have been within the North Carolina Exclusive Economic Zone. Under Alternative B, sand may be sourced from borrow areas in federal waters on the Outer Continental Shelf where Bureau of Ocean Energy Management is the permitting authority. Sand may also be trucked in from stockpiles.

– Time of year is flexible. The park service “would recommend” projects proceed between Nov. 16 and April 1 to avoid breeding and migration periods. But the draft statement states the seashore may consider summertime work.

As declared on the title page, National Park Service cost associated with developing this Environmental Impact Statement is $468,000.

After public comments are reviewed and considered, the National Park Service will issue a final Environmental Impact Statement, which will be available online. A 30-day waiting period follows that posting. After that waiting period, one alternative or a combination of alternative elements will be documented in a record of decision, signed by the regional director of the National Park Service South Atlantic Gulf Region.

For the documents associated with this process, visit parkplanning.nps.gov/CAHASediment.