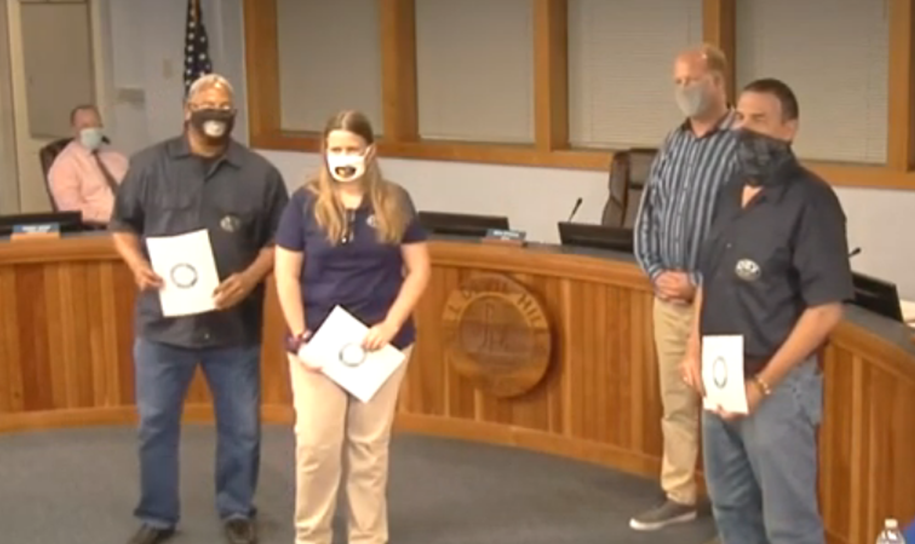 Actions at the Kill Devil Hills Board of Commissioners on November 9 included the recognition of three organizers of a local charity group, annexing two properties and authorizing street and drainage repair work.

In its second year of operation, the 501(c)(3) charity Garage Band Charities sponsored a family-friendly custom automobile show last month that brought more than 400 eye-grabbing vehicles and their owners to the Outer Banks. The multiple day event also raised money for two other charities: the Children and Youth Partnership and the Dare County Motorsports Charity Group.

“It was a great time for everybody,” commented commissioner B.J. McAvoy.

According to Gray, OBX Rod and Custom Festival was able to donate $15,000 to local charities in its first year. No totals were mentioned for the October event.

After Mayor Ben Sproul read a resolution of appreciation for the OBX Rod and Custom Festival, Tillett advised that one hotel already booked for the 2021 show and Quidley said the group appreciates all the support that has been shown.

Annexation allows both lots access to the town’s water system – already in place – as well as solid waste collection and other services. Without annexation, development options are limited since the county does not have any water infrastructure nor any solid waste service routes in that area.

When asked about possible development of the properties, planning director Meredith Guns explained that the lots are currently able to be developed under county guidelines even without annexation.

“They get a few more services and the town gets a few more tax dollars,” added Sproul.

A motion to accept the annexation petition and extend the corporate town limits to include Pine Grove Subdivision lots 3 and 4 zoned as low density residential passed with unanimous approval.

In a separate motion, $1,413,000 was authorized for repairs and other related work on West Third Street, Seminole Street and drainage work on US 158.

According to town engineer Pete Burkhimer with American Engineering, bids came back a little higher than expected, but the work will never be any cheaper.

In other business for the night, Martin Dalton was appointed to fill a Community Appearance Commission vacancy when Natalie Painter declined reappointment for a term ending November 2023; after a brief discussion on parking, the board agreed to have the Planning Board look at existing ordinances to see if any changes are recommended; the board authorized a committee to discuss possible Fresh Pond use with Nature Conservancy staff and Nags Head officials; the board also asked staff to look into easing guidelines for accessory dwelling units and report back to the board and approved a consent agenda with a September monthly report, October 12 meeting minutes, approval of a N.C. Department of Environmental Quality grant for a Kill Devil Hills Shore Protection Project and Moor Shores Estuarine Access grant approval.