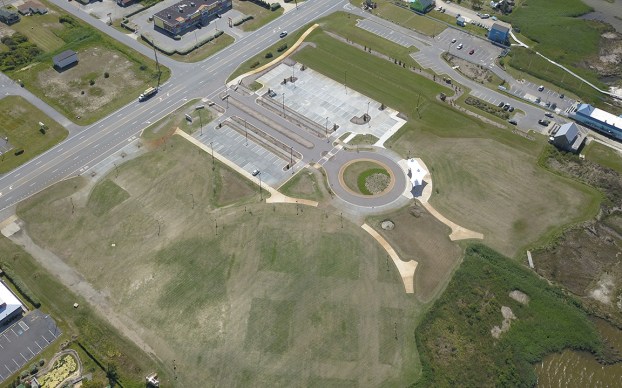 Overlooking the Roanoke Sound at 6800 South Croatan Highway in Nags Head, the 10 acre site is used for large outdoor gatherings and, as the name implies, events that can draw both visitors to the Outer Banks along with interested locals.

“Nags Head planning staff asked that the property be combined into one conditional use permit,” said Lee Nettles, Dare County Tourism Board executive director. “The idea was that doing so would streamline site application reviews and rental use.”

According to Nettles, it was during the application process that members of the board realized there already are permitted uses for those northern properties.

“Taking a step back,” Nettles continued, “we felt we needed to move toward an updated master plan for the entire property and stick with the permitted uses we already have for the northern properties.”

While in favor of an updated master plan, Albemarle and Associates engineer John DeLucia said he does not agree a combined CUP is needed.

“As far as bringing all these properties into the CUP, I struggle with that,” DeLucia advised. “I don’t see why you cannot use these properties for parking or to enhance events just like they did before they were under your ownership.”

DeLucia went on to say the South Beach Grille property is not within the overlay district, so trying to bring other properties into the CUP doesn’t seem correct.

DeLucia also pointed out that the only properties owned solely by the Tourist Bureau are the three northern properties. Nags Head is still part owner in the main event site.

DeLucia did say that if the Tourism Board wanted to move forward with a plan to tear down everything, or to work around the tower element and tear down the restaurant, or even incorporate it into a hotel, then everything would need to be brought into one CUP.

“But,” he added, “already having permitted uses on property that you own that are next door, a new CUP doesn’t seem right.”

As the discussion continued, board member Ervin Bateman recommended W. Jay Wheless, the Tourism Board’s legal counsel, have a conversation with Nags Head attorney John Leidy to determine what might be applicable in this case.

“We need to take a step back and let them look at it legally,” said Bateman.

Contacted after the meeting Nags Head Planning and Development director Michael Zehner said without knowing what the conversation was, it would probably not be appropriate to comment other than to say there is a pending conditional use permit application to roll the three recent property purchases into one overall conditional use permit for the main event site, which is designated a public event site.

“In our review of the ordinance, it was our determination that this was appropriate for those properties,” Zehner added. “The application would incorporate the three other properties, so they could be used as support functions on the main site, and also potentially for events themselves.

Zehner went on to say there are various uses throughout the town that are subject to a conditional use permit, which goes through the Planning Board and ultimately approved by the Board of Commissioners. There are also uses considered “by rights” which would generally require only a building and zoning permit of some sort to effect a use on the property.

“As far as I know,” Zehner continued, “Pamlico Jack’s and South Beach Grille were formerly restaurants and those uses for those properties in those zoning districts would not be conditional use permits. Those would have been ‘by right’ uses on those properties.”

Wheless said he would meet with Leidy and report back to the board.

In other business for the day, the board voted to approve seven Tourism Impact Grant requests totaling $814,640.

Leading the list was $342,640 to Hatteras Community Center District for the construction of a 3.19 mile, 5 foot wide loop along Highway 12 and Eagle Pass Road through Hatteras Village. Nettles explained that even though it does not physically connect to the project farther north, the project is a continuation of the bigger multi-use path effort in Avon and the tri villages.

Other awards included $200,000 to Kill Devil Hills for redevelopment of Meekins Field;
$150,000 to Manteo for Town Common Phase II construction of restrooms, informational kiosks, seating and other amenities including wi-fi service; $40,000 to Nags Head to construct a safe pedestrian connection (400 linear feet of 5 feet wide sidewalk) along the north side of Admiral Street by the MP10.5 Shoppes Access from the traffic light at Highway 158 to Wrightsville Avenue; $30,000 to Nags Head to redesign and install new skate park elements; $40,000 to North Carolina Coastal Federation for environmental improvements to the Baum Bridge boating area parking lot; and $12,000 to Outer Banks Gun Club to install a parking area and carport structure and install a concrete pad on the new trap field.

A request from the Town of Duck for a one year extension for its Tourism Impact Grant was also approved.

Honors for Wanchese Christian Academy for the first quarter of the 2020-21 school year have been announced. WCA administrators have... read more