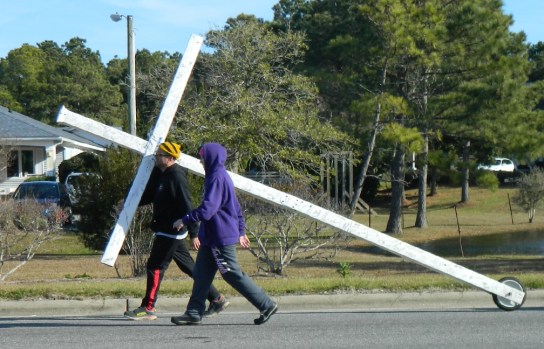 Michael Vincent, left, and Brandy Lee walk along US 64 near CVS Wednesday. The trek across North Carolina with a cross was to draw attention to substance abuse. Philip S. Ruckle Jr. photo 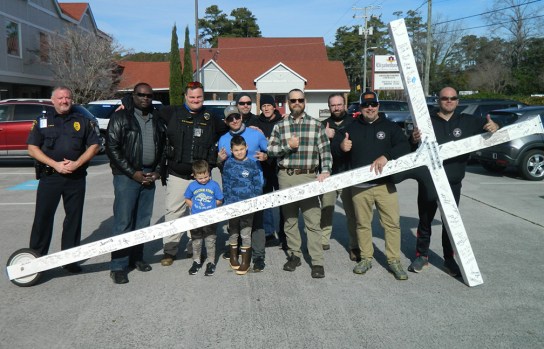 I AM Outreach Ministry members from Knightdale pose for a group photo with local law enforcement officers at the Elizabethan Inn in Manteo on Wednesday. Ministry members had just completed a 500 mile walk with a cross that started October 1 in Cherokee to draw attention to substance abuse. Philip S. Ruckle Jr. photo 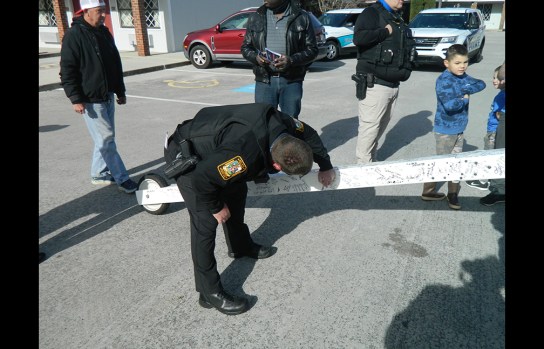 Always time for one more signature to show support for the battle against substance abuse. Philip S. Ruckle Jr. photo

While police blocked traffic at busy intersections, a few onlookers took pictures and others cheered loudly as a small group of walkers from I AM Outreach Ministry in Knightdale carried a large white cross into the Elizabethan Inn parking lot in Manteo.

Thanking law enforcement for their help, Brent Sellers, who serves as executive director and pastor of the ministry program, said it was encouraging to be working with the very people they used to run from.

Sellers went on to say the walk across the state was an attempt to draw attention to substance abuse and the opioid abuse crisis.

I AM Outreach Ministry is a faith-based drug rehabilitation program located in Knightdale. The nine month in-house program offers Christian mentoring, education and trade skill training for men battling addiction issues. Sellers emphasized that there is no cost to participants. The program also relies on donations from individuals, churches, businesses and civic organizations without any government assistance.

The United States Department of Health and Human Services National Institute on Drug Abuse data from 2018 shows that 128 people in the United States die every day from overdosing on opioids, making drug overdoses a leading killer with numbers over and above those from guns or car accidents. The Centers for Disease Control and Prevention estimates that the total “economic burden” of prescription opioid misuse alone in the United States is $78.5 billion a year, including the costs of healthcare, lost productivity, addiction treatment and criminal justice involvement.

“I AM works with men to help build new lives around new walks with Christ,” said Sellers. “We are a ministry focused on reaching the unreachable. Offering hope to men in the depths of drug addiction.”

Although many similar east-west treks use the two most distant county seats as start and end points – Manteo near the ocean and Murphy in the mountains – Sellers said he prayed about the trip and was led to start in Cherokee.

Sellers said he had never been to Cherokee before, and when he did go there was not a lot of support. Local church leaders sent him to the chief. While trying to get an audience with the chief, Sellers said a Native American there told him there is an acute addiction and overdose problem in Cherokee.

“He was talking about the opioid addiction there and that they were getting overdoses there like eight people a week,” said Sellers. “It’s bad. It’s really bad. They have no help whatsoever. And, they don’t want any help from the outside because of what [the] white man has already done.”

Sellers said most of that information was news to him prior to the Cherokee visit. And, as he continued to pray, he was led to talk with the chief. With some persistence on Sellers’ part to make it happen, he said eventually permission to start in Cherokee was granted and the walk began October 1.

Along the way hotel rooms and meals were taken care of by donations.

“The people at the Elizabethan Inn have been so good to us,” he added.

Was the walk a success?

Sellers said the results of the walk will not be seen until later down the road.

“The accomplishment is not about what I can see with the naked eye,” Sellers explained. “The accomplishment was to just do it. God will do the rest of it. He just tells me to be obedient and to do it, to walk through these towns and to preach. I’m not to condemn people, they already know they are condemned. But to just pray. That was the success story. I’m talking about people pulling over on the side of the road on I-40 coming up to the cross crying. And we prayed for them.”

Sellers said he had no idea how many people driving to the mountains to see the leaves’ colors change might have seen them and were touched by the cross.