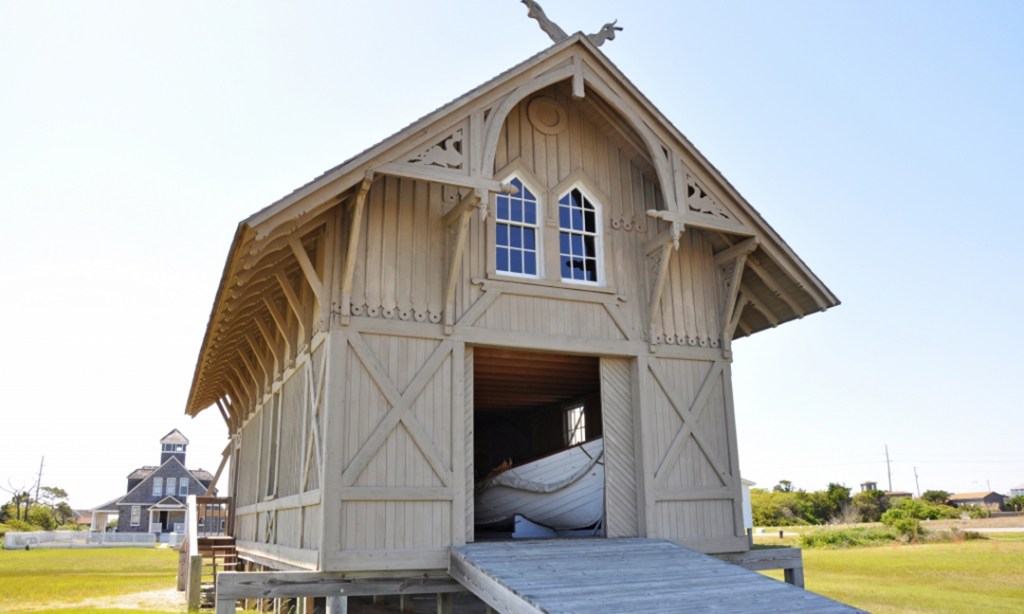 Dare County Tourism Board voted Thursday to provide money for repairs to the Chicamacomico Life-Saving Station on Hatteras Island. Chicamacomico 1874 Station in Rodanthe was the first United States Life-Saving Service station built in North Carolina and surfmen there are credited with several courageous rescues between 1874 and 1954. chicamacomico.org photo

The Dare County Tourism Board voted to provide $22,610 toward repairs to the Chicamacomico Life-Saving Station on Hatteras Island on Thursday during a virtual regular session meeting.

According to a written request by the Chicamacomico Historical Association, Inc. Board of Directors, the former United States Life-Saving Service and United States Coast Guard station in Rodanthe has experienced considerable damage where rain water has entered through two sliding doors. The money will be used to repair the structure’s water damaged floor as well as to add storm doors to mitigate any future damage.

Chicamacomico was the first of seven life-saving stations built along the North Carolina coast in 1874. One of the most unique historical maritime sites on the east coast, the U.S. Coast Guard recognizes the 1918 Mirlo rescue by the Chicamacomico station surfmen as one of the top rescues in maritime service’s history. That rescue, during World War I, saw Chicamacomico surfmen pull 42 sailors from the ocean after the British tanker Mirlo was struck by a German U-boat torpedo. More than a dozen other courageous rescues took place at Chicamacomico between 1874 and 1954.

Adding to the unique historic significance of the station is that the building houses Beebe-McClellan Surfboat #1046, which was used in the 1918 Mirlo rescue. It is the last known surviving surfboat of its class.

The Chicamacomico Historical Association was founded in 1974 to protect the life-saving station in Rodanthe. Building restoration, exhibit development and historical research are funded by private donations, memberships and grants with limited state and federal funding.

Today, between Memorial Day and Labor Day, eight men team perform beach apparatus drills weekly at the site on the east side of NC 12. During those drills, a 1,000 pound rescue cart is pulled, pushed and guided over the compromised floor. Faced with visitor safety concerns, site officials want to undertake the needed repairs during the winter months while the station is closed to the public and have everything completed prior to the next scheduled drill set for Easter week.

The $22,610 repair project is expected to have two phases. Phase one will include patching and reinforcing the damaged floor and is estimated to cost $1,780. The second phase includes adding historically accurate wooden storm doors outside of the existing sliders for $16,830. Included in the budget is $1,500 for project management and oversight along with another $2,500 contingent one any unexpected damage.

In a phone interview after the meeting, Chicamacomico Historical Association executive director John Griffin said the repair work planned is a combination of restoration, rehabilitation and mitigation.

According to Dare County Tourism executive director Lee Nettles, money from the long term unappropriated grant is awarded on a reimbursement basis.

Also approved during the February 18 meeting were guidelines for long term unappropriated grants similar to the Chicamacomico request.

Dare County Tourism Board’s long-term unappropriated fund was established to financially assist non-profit organizations and Dare County governmental units with up to $500,000 for programs or services needed due to the impact of tourism on the county.

Applicants may only apply for only one project within a three-year period for unplanned, extraordinary, non-recurring and urgently needed projects located within Dare County. Non-reimbursable items are also spelled out.

“I think it is important for the board to have some type consistent approach for these dollars,” explained Nettles following the meeting.

He went on to say that the board elected to consider the Chicamacomico request on its own since it came in prior to setting guidelines and requiring adherence to the new guidelines could have delayed work a month, maybe two.

In other business for the day, Nettles said he felt the Soundside Advisory Committee has been making progress.

During a recent meeting the group discussed, among other things, hosting sporting events, concerts and banquets.

Although there has been no decision made yet on how the restaurant building can or will be used, any decision related to that building will be contingent on its condition and the type of use desired. Nettles added that looking at all the options is part of the advisory committee work.

The Soundside Advisory Committee is scheduled to meet at 3 p.m. on Wednesday, February 24. The full board will meet again at 9 a.m. on Thursday, March 18.